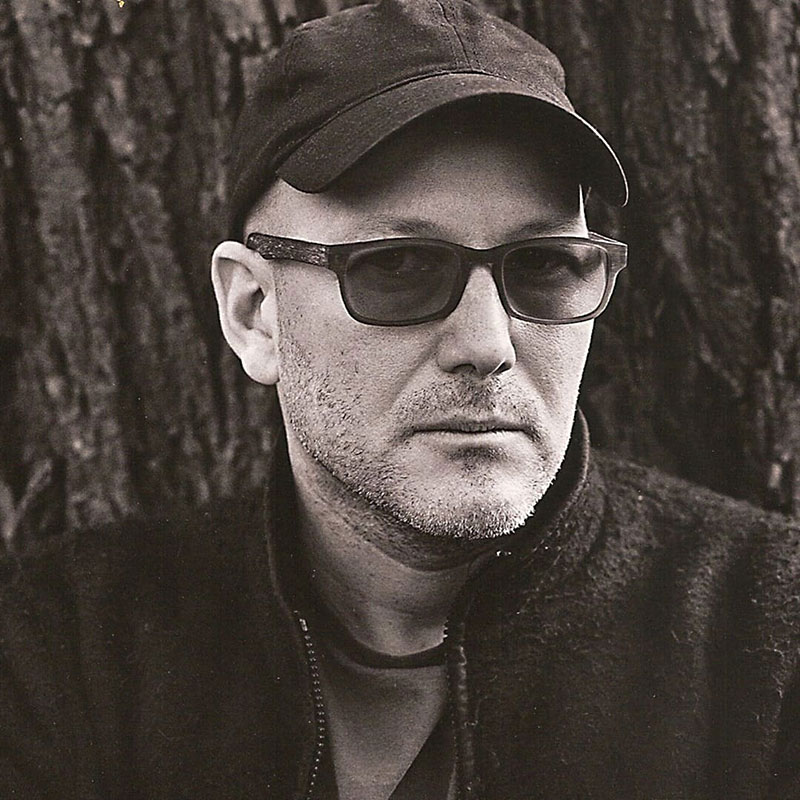 Since Louis and Auguste Lumière invented the Cinématographe and locked in much of what we know as the felt experience of "going to the movies," cinema, filmmaking, etc. has been used as an allegory (with varying degrees of accuracy) for everything from the last word in objective truth to human consciousness itself. But it's not really until you see the films of Bill Morrison that you realize that his work captures something very specific, a feeling cinema has long played with but never so directly, a sensation you didn't know you needed to experience until you do: how human memory actually works.

That experience will be celebrated in a massive retrospective of his ongoing work, one that will connect the Austin Film Society, UT's Visual Arts Center, and the Bass Concert Hall.

“I am interested in the materiality of film and how film can reflect historical time, the time between it was shot and now.” – Bill Morrison

For those unfamiliar with his remarkable oeuvre, Bill Morrison, born 1965 in Chicago, Ill., is a filmmaker who came out of the visual arts and animation. Much of his work manipulates old (in cinema terms) found footage: often silent-era, usually free from spoken dialogue. This footage – sometimes lost for decades, sometimes not quite as lost as it first appears – is often profoundly decayed: covered in scratches and blemishes; warped, layers stripped away; images distorted and blown apart and obscured. This effect is not created digitally, nor is it Morrison's doing; it's simply what happens to really old film that is not taken care of. Hence, his work reflects the felt experience of the human memory: an image, distorted over time, stripped of much of its original meaning.

Morrison started in visual art and animation before exploring film – as in the physical stuff, the celluloid and (sometimes) nitrate – as a medium. "I was trying to cram my paintings into animated films," he said. "I found it frustrating just because it was laborious and that labor was evident on the screen." He started thinking it over and realized the camera was already creating those images, 24 every second, for him: "Why don't I use the paintings that the cameras created and refer to their individuality after the fact?"

He started distressing or deconstructing films, shooting film and making photographs from them, then altering them and reanimating that. That wasn't quite nailing it, either. Encounters with the work of experimental filmmaker Ken Jacobs, Peter Delpeut's "Lyrical Nitrate" (a compilation of film the Dutch filmmaker found in a projection room), and the thunderous a-ha! moment that was Chris Marker's "Le Jetée" turned him toward using aging footage as it was, neither pristine nor artificially distressed.

Morrison had figured it out; since 1990, he's created dozens of shorts and seven ingenious features exploring with these "lost" materials; "these messy frames can speak to the materiality of film," he explained. The films he's working with may have been shot decades ago but they are modern because "they took exactly this long for them to look this way."

His achievement has not gone unrecognized. He's picked up a Guggenheim Foundation Fellowship, received grants from the Foundation for Contemporary Arts, the Creative Capital and Alpert Award in the Arts, and had a midcareer retrospective at the Museum of Modern Art in 2014. Dude is just about as accomplished as you can get in his field without literally being a (art)household name on the level of, say, a Barbara Kruger.

But he's never mounted anything quite like what he is about to do in Austin. In January and February, the Austin Film Society will screen a mess of Morrison's work under the shockingly direct title "Essential Cinema: The Works of Bill Morrison." On Jan. 21, Bass Concert Hall will host a special performance of The Great Flood with a live score by jazz composer and guitarist Bill Frisell. (Morrison's work is usually paired with music, often by some of the best composers alive: John Adams, William Basinski, Maya Beiser, Gavin Bryars, Philip Glass, Kronos Quartet, and Julia Wolfe. With a few exceptions, Morrison cuts to the score, not the other way around.) Elsewhen, UT's Visual Arts Center presents the exhibit "Bill Morrison: Cycles & Loops." This is the first time Morrison's work has been presented thusly, as bits of art that stand on their own rather than a screening of a complete film in a gallery space. 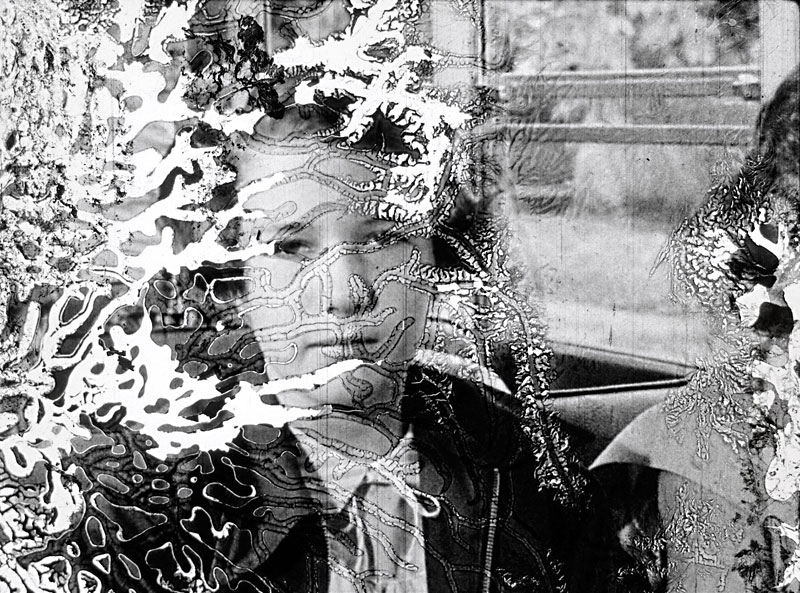 It is an embarrassment of Morrison riches, and the films on offer are a murderer's row of Morrison's work. There's the increasingly legendary Decasia (2002), perhaps Morrison's most famous meditation on the materiality of film and the first film of the 21st century to be named to the Library of Congress National Film Registry. Viewers can also enjoy the genuinely gorgeous "The Miners' Hymns," an ode to labor and its consequences using early footage from years of miners' galas and labor strikes in the north of England. Also up are two of Morrison's more documentary-like films, Dawson City: Frozen Time and his 2021 picture The Village Detective: A Song Cycle. 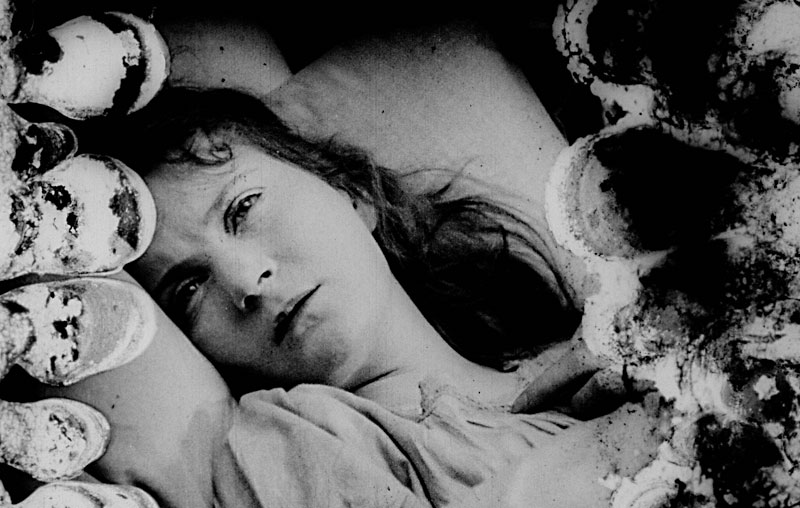 Morrison had been moving toward a more straightforward presentation for some time but these most recent films, with captions and newly shot footage, rewire the extreme subjectivity of his earlier work. Dawson City explores both the city itself – the heart of the late 19th century Canadian gold rush – and a cache of over 500 film prints, preserved by permafrost, discovered in 1977. The footage of the anonymous prospectors, some of whom we see frozen to death in search of their fortunes in a town that went up overnight, is a remarkable look at the way events both vanish and persist (a staple theme of all of Morrison's work, really). "Doing all this research into the film find, which has long fascinated me, gave me the opportunity to talk about how Dawson City got there via the gold rush of 1896 and 1897," Morrison said, "[which] coincided with cinema as a public event to be shared with other viewers. I found that a compelling coincidence and one that could be teased out by how many crossovers there were between Hollywood and Dawson City."

The Village Detective is as fascinating in a different way. Based on a partial 35mm print recovered from the ocean by an Icelandic fishing boat, it explores that which isn't lost at all: The material is an incomplete print of a popular 1969 Soviet comedy starring the beloved Russian actor Mikhail Ivanovich Zharov. "[The late] Jóhann Jóhannsson, the Icelandic composer who wrote the music for 'The Miners' Hymns,' contacted me because [he] heard about this fisherman who had pulled up his net and found four reels of a Soviet film in the net," Morrison said. "Turned out Mikhail had been in 70-some films over the course of the Soviet era, including as a bit player in a pre-Soviet film. So his life really reflected the rise and fall of the Soviet Union." 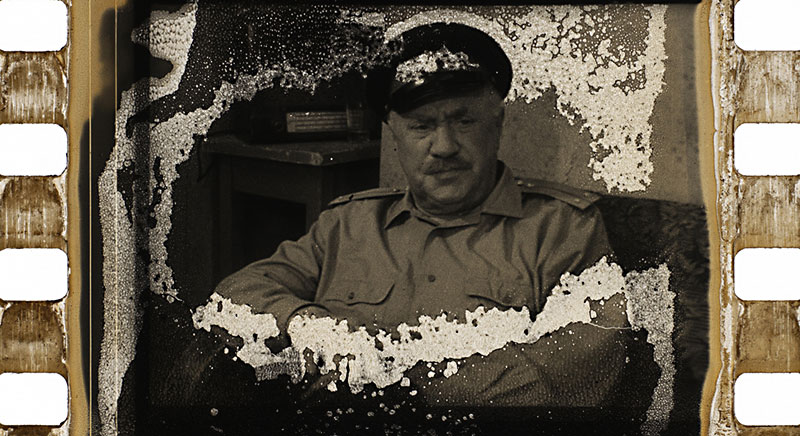 Morrison thought that, by sourcing arov's films, he could reflect that political upheaval through the roles the actor chose and performed. "I think [The Village Detective] is leaning hard on a philosophical idea that life affects art and art affects life," he said. "It brings up the issue that somebody can be so familiar to one culture and completely unknown to another, regardless. So it doesn't need to sit on the bottom of the ocean to become a foreign object, even thought I am interested in the materiality of film and how film can reflect historical time, the time between [when] it was shot and now, the way the piece of film was exposed to the time."

Screenings are one thing, but what Morrison is doing in the VAC is something else. "It occurred to me that in the gallery space, I was free to let my movies behave more like paintings." The viewer can look forward to multiple projection surfaces and a wash of sound in the gallery disconnected from the original score. What it isn't is a movie in a gallery. "I've had gallery shows that behaved more like poor screening experiences," Morrison said. "You had bleed-through from the audio, there was ambient light. Oftentimes there weren't places to park yourself so that you could watch the film from beginning to end. It was just kind of a mess."

This time, Morrison chose to embrace the gallery for what it is, not what it is not. "Let's make this be loops that could be digestible quickly. Then if you wanted to stay and watch several revolutions of the loop, you could feel how they build over time. It seemed an opportunity to address the painterly or pictorial quality of the work without narrative."

The Complete Bill Morrison: A Guide to the Austin Celebration of His Work 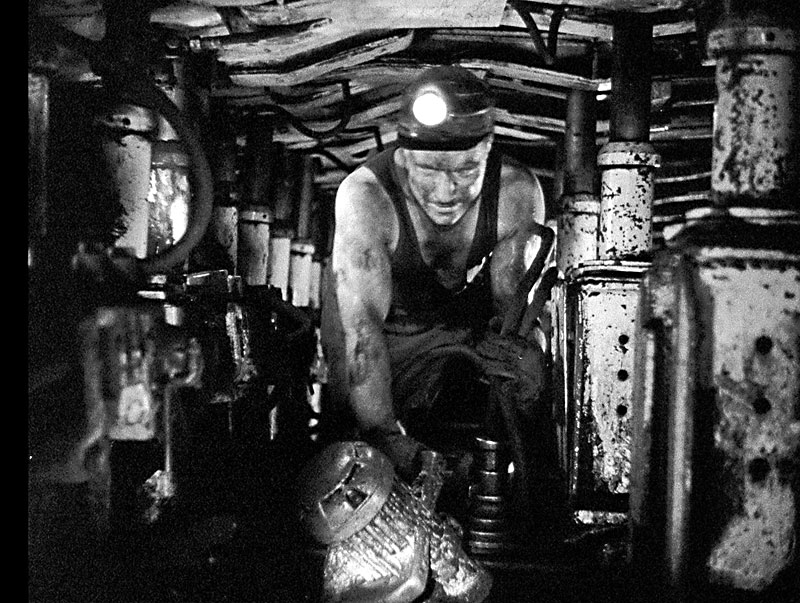 Decasia (2002) The life cycle of film as a rumination on decay and mortality. Score by Michael Gordon. Screens with "Buried News" (2021), in-person introduction by the filmmaker and UT RTF associate professor Lalitha Gopalan. Jan. 27, 7:30pm.

"The Miners' Hymns" (2011) The history of the coal miners of the north of England, commissioned for the 2010 Durham miners' gala. Score by Jóhann Jóhannsson. Screens with "Light is Calling" (2004) and "Who by Water" (2007), introduction by UT RTF Associate Chair of Media Studies Caroline Frick. Feb. 3, 7:30pm.

The Village Detective: A Song Cycle (2021) A partial print of a popular Russian comedy, recovered from the sea of Iceland, becomes the raw material for a meditation on film as memory. Score by David Lang. Screens with "Her Violet Kiss" (2021), introduction and post-screening live virtual Q&A with Morrison and UT Department of History professor Joan Neuberger. Feb. 10, 7:30pm.

A version of this article appeared in print on January 21, 2022 with the headline: Decay, Preserve, Observe