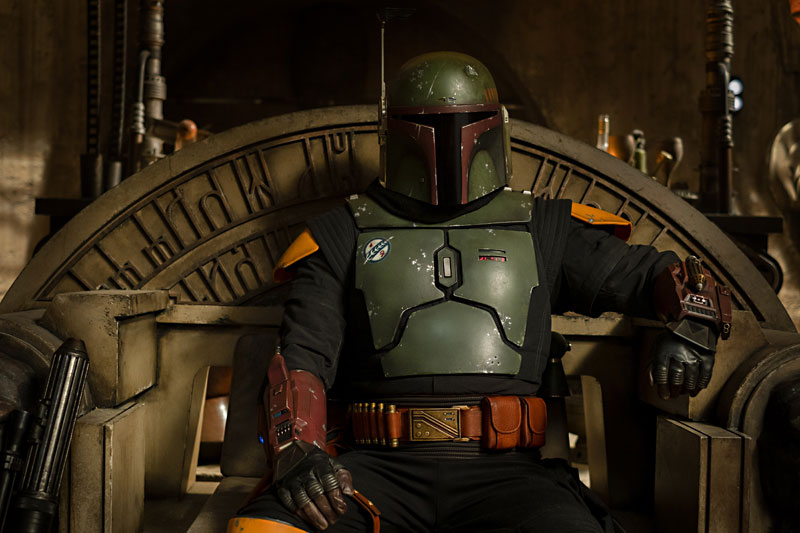 Who's the coolest killer in Star Wars?

Don't fry your circuits; we all know it's Boba Fett. In the battle between the Empire and the Rebel Alliance, he was a man with his own agenda.

Like every kid eager for the second installment of George Lucas' saga set a long, long time ago in a galaxy far, far away, in 1980 a young Robert Rodriguez was fixated on the helmeted figure. "The pre-publicity was all about who the new characters were," he said, "but [Boba] was already a star before the movie came out, and we were all looking forward to seeing him.

"Anything called a bounty hunter back then was immediately a badass," he said, but Boba Fett was everything a young kid could want from an interstellar rogue. "He had a cool ship, a cool name, he was shrouded in mystery, and you couldn't see his face, so he was always my favorite character."

Now the kid that smuggled his action figures into school so he could play with them under his desk has the best Christmas gift imaginable. The director of Desperado and Alita: Battle Angel is now the executive producer of The Book of Boba Fett, the new series about the mysterious Mandalorian. Not only that, but he's directing several episodes in the first season, which debuts on Disney+ on Dec. 29. He said, "When I started doing this show, I realized how many times I've dressed as Boba Fett at Halloween, how many toys and images I have around the house. After all this time, I can go back and write it all off as research." 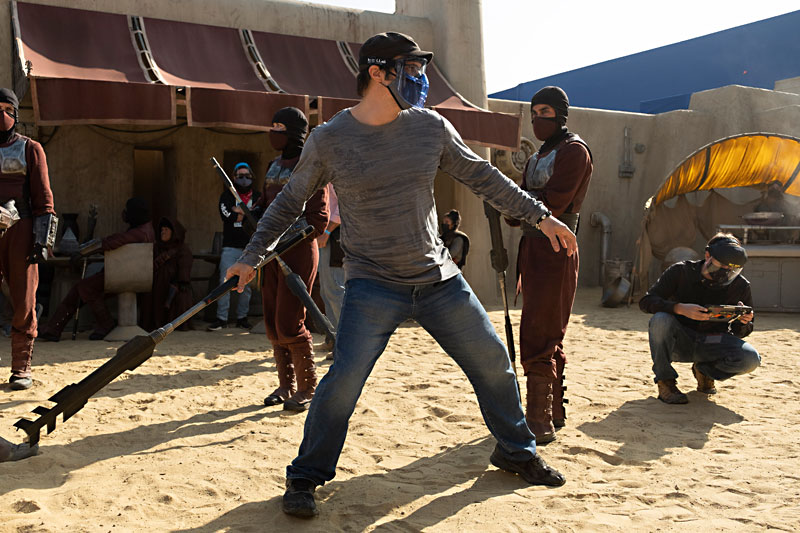 It's also been an amazing opportunity to enter the world of one of his all-time cinematic heroes: George Lucas – or, as Rodriguez called him, "the biggest independent filmmaker of all time." It's hard not to see similarities. Both built their own indie studio outside of Hollywood – Lucas' Lucasfilm in San Francisco, Rodriguez's Troublemaker Studios in Austin. Both created franchises outside of the studio system. Both were always on the bleeding edge of filmmaking tech. Over the years, Rodriguez has been lucky enough to call Lucas a friend, kindred spirit, and mentor. "Being able to handle his babies like this, yeah, you feel like you're from that pedigree."

“[Boba Fett] had a cool ship, a cool name, he was shrouded in mystery, and you couldn’t see his face, so he was always my favorite character.” - Robert Rodriguez

And Boba Fett was a perfect fit for Rodriguez, whose movies are filled with antiheroes like Machete, El Mariachi, From Dusk Till Dawn's Seth Gecko, and the vengeful bulldozer Marv in Sin City. But the pairing almost never happened, and the opportunity caught the filmmaker by surprise. He knew his old friend Jon Favreau was producing The Mandalorian, and when he saw the first few episodes of season 1 Rodriguez wrote the Iron Man director to compliment his work. "He wrote back and said, 'Hey, thanks. Any time you want to come play, let me know.' I wrote him and said, 'Anytime, anywhere.' So he wrote back again right away and said, 'Can I call you tomorrow?' He called me the next day and said, 'I need you to bring some of that Alita magic, because I just lost a director for this episode, and we need to start right now. Could you come tomorrow?' 'Oh, yeah, I can come tomorrow.'"

The two friends had both left a little something out. Rodriguez was knee-deep in editing We Can be Heroes, "but I signed up anyway." At the same time, Favreau omitted to mention that his episode, "The Tragedy," was the full onscreen ass-kicking return of Boba Fett (Temuera Morrison), last seen heading for a new definition of pain and suffering as he was slowly digested over a thousand years in the belly of the all-powerful Sarlacc. But appearances can be deceiving when it comes to this merciless merc. "When I saw the script and saw Boba was in it, I didn't know if he was going to stick around. It wasn't until I finished that episode that [Favreau] said, 'I'm doing a series, and I'd like you to be a part of it.'"

Not much of a surprise, considering Rodriguez's love of antiheroes, his Fett fan status, and the fact that "The Tragedy" was one of the most popular and talked-about episodes of The Mandalorian. The usual calculation is that a page of script equates to a minute of TV. This, he said, was "only about 18, 19 pages," leaving a lot of space for what he was there to do: carnage. "You see in that episode what I'd do with my action figures," he laughed.

It was also one of the episodes least like the rest of the series in how it was shot. If there's one thing that everyone knows about Rodriguez it's that he's a tech head. He was one of the earliest adopters of green screen filmmaking and digital cinematography. In part that's thanks to Lucas, who showed Rodriguez footage of Attack of the Clones while he was mixing Spy Kids at Skywalker Sound and immediately inspired him to go digital. "That's what turned my whole career around," said Rodriguez, "and that's why Jon even asked me to be a part of this show, because of things like Sin City and Alita." So the fact that The Mandalorian was mostly shot on the cutting-edge Volume soundstage, where hi-res LED screens create real-time backdrops, would seem like another plus for Rodriguez. In reality, Boba Fett's return to battle was too big for the Volume stage, and Rodriguez had to head out to Simi Valley with a Star Destroyer's worth of Stormtroopers. "[It] was the one episode that actually shot on location." 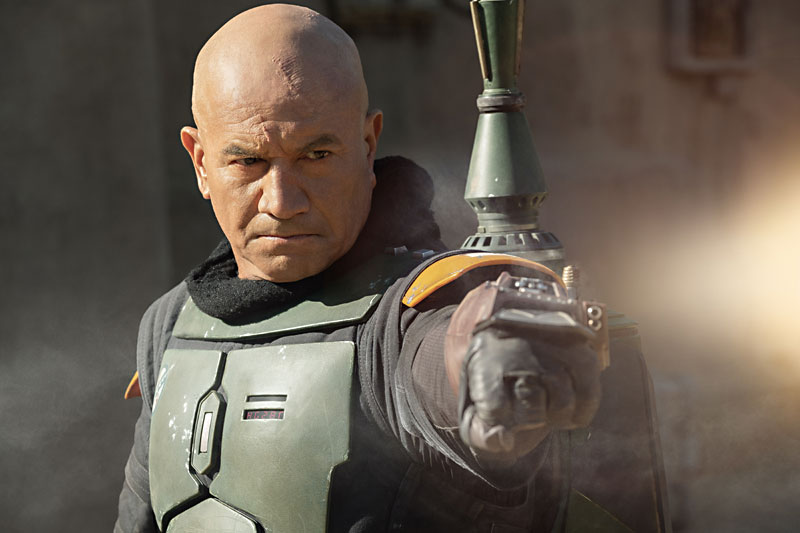 By filming "The Tragedy" while not knowing about The Book of Boba Fett he had inadvertently set the tone for the series: Luckily, he said, Favreau's scripts meshed with his visions cherished since childhood, and the mantra for the show became, "What he was like in my episode, let's make him more like that." However, the team wasn't handed a completely blank slate. When Boba Fett debuted in 1980 (we don't talk about the 1978 Star Wars Holiday Special) all audiences knew about Mandalorians was a passing reference in Donald F. Glut's novelization of The Empire Strikes Back. Since then, there have been more films, TV shows, comics, novels, and games that have added extensive details to the Star Wars universe, and that includes much more backstory for Fett himself. Woe betide the storyteller that incurs the wrath of fans by making some canonical blunder. Fortunately, Rodriguez said, to make sure that they didn't use the wrong robot or make some technical blunder that would have fans screaming, there was a whole Jedi holocron of experts to hand: "Resident knows-everything-about-Star-Wars [Lucasfilm Executive Creative Director] Dave Filoni, Jon, and people on the crew. We can run everything through a fine sieve [but] we're still telling our own story."

And right now that story is as mysterious as the OG Mandalorian himself. The little that is known right now is that Boba Fett and mercenary Fennec Shand (Ming-Na Wen) are back on Tatooine, trying to build their own criminal empire out of the ashes of Jabba the Hutt's syndicate. But Rodriguez promises there's a big galaxy out there. "What you see in the trailer is in the first 15 minutes of episode 1. So people have no idea what's in store. It's going to blow their minds."

The Book of Boba Fett debuts on Disney+ on Dec. 29.