Check out some creature features this weekend David Giovanni and his cat Lucky, two of the stars of Cat Daddies, screening this weekend as part of the Animalis Fabula Film Festival (Photo by Eric Yang)

The World Animal Awareness Society is an Austin-based nonprofit dedicated to providing the resources needed for worldwide animal welfare. This year, the organization's impact is expanding with the in-person debut of Animalis Fabula Film Festival, a selection of diverse films about or including our nonhuman friends.

Festival director Tom McPhee said that while the festival is open to all kinds of films about animals, many of those submitted and selected are activism-oriented. "Even the more comedic movies, they are very powerful and very potent and remind us of the relationship we have with animals all around us."

With a history of using storytelling to amplify awareness around animal welfare for years, one way that WAWS was able to expand its presence with the unique film festival was by partnering with collaborators such as Rainforest Partnership. The nonprofit works toward the conservation and preservation of tropical rainforests and will be showing a selection of films from their own curated program familiar to Austin audiences, Films for the Forest.

However, the festival will also bring new talents and perspectives into the discussion, such as Cat Daddies. The debut documentary from Mye Hoang, it follows how men's lives have changed because of their relationships with their cats. Hoang said the feature examines the relationship between animals and gender roles while also looking at animals as an expression of compassion and healing, and that this unique festival is the perfect platform to spotlight those issues. "I am very aware of communities needing representation and needing to feel seen," she said. "I feel that way about Animalis Fabula because I know I'm going to have a good time around 100% animal lovers. It's a safe space. Cat people are often considered weird, but here we can put on our cat T-shirts or our cat ears and feel OK about it."

Not every animal faces such a kind fate from humanity. Michael Webber's The Conservation Game investigates the dark side of conservationism, especially the plight of big cats in American private collections and where so many of those animals come from. Producer Jeff Kremer said, "The conversation is not just about the people that exploit these animals, but how our country and the world view animals." 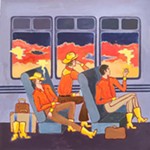