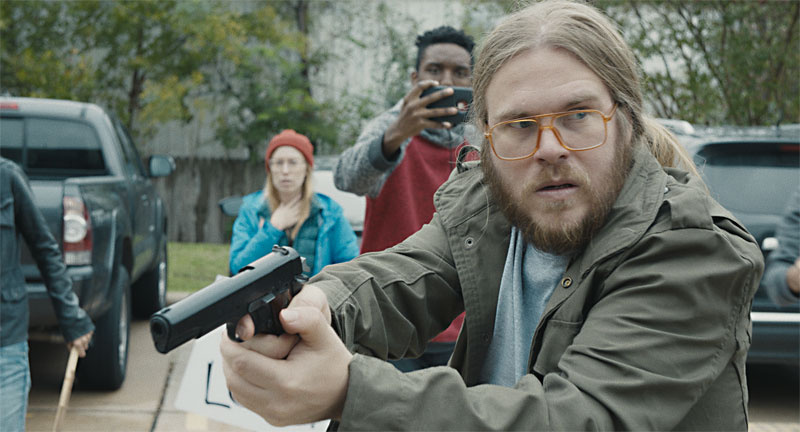 The first-time feature director's movie, Austin-shot character piece Duncan, could not get into festivals. At all. Just couldn't get arrested. "We thought we were dead in the water," Valley said of his movie's 2020 status. "The reactions we were getting were terrible. The movie was getting turned down left and right for festival slots. Several of them said, 'We can't show this because this is an ongoing issue.' I think they were absolutely afraid the content would attract attention from lunatics but I also think you can write the best drama in the world and unless you have A-list actors, nobody gives a shit."

Valley finally booked the movie, about a far-right conspiracy theorist and an aspiring journalist who team up to investigate a possible confluence of cults and lizard people, into the horror-based Nightmares Film Festival. That's where it promptly won an audience award. Earlier this year it played the streaming Panic Fest, another horror-based festival, where it was again embraced. The horror audience got it right away. "It felt like a genre film, a conspiracy horror," Valley said. "And Duncan is this creature, this sort of monstrous character, and the reality of these fringe movements is pretty horrific."

Valley knew what he had to do: Embrace the audience right back.

Duncan is now known as The Pizzagate Massacre, and the new title fits the movie perfectly. Starring Tinus Seaux as Duncan, the QAnon type, and Alexandria Payne as the journalist Karen Black (with a frankly terrifying Lee Eddy as an Alex Jones-type television ranter), The Pizzagate Massacre reveals itself to be a pitch-black satire. And the rebranding worked: In July, Archstone Entertainment picked it up for distribution, and it arrives on VOD this week.

All the delays have, fortunately and unfortunately, worked in Valley's favor. "The market is pretty bleak now for small dramas and it's much better for genre," he said. Initially, Valley was angry that folks weren't picking up what his movie was putting down. "I was upset that the movie wasn't landing with people," he said. "And I decided when I retitled it, after folks were actively dismissing it, I figured come hell or high water, the title was going to tell you what the hell this movie is about."

“I’m never going to make a movie that is more offensive than what actually happened at InfoWars.” – John Valley

Then again, as the Kyle Rittenhouse trial wraps up and with the civil action against some of the Charlottesville alt-right rioters ongoing, Pizzagate somehow feels even more sickeningly relevant now than it did 12 months ago. (Even allegedly lefto Austin isn't immune to far-right activity – it's entirely possible that the folks who hung antisemitic banners could tell you that the lizard people canard started as a conspiracy theory about Jews. Oy vey.)

Valley says one group of producers he talked to likened it to a "Southern Gothic Taxi Driver," which thrilled him. "I was reminded of the idea that Taxi Driver is a werewolf movie and Pizzagate is also about weird, isolated individuals. It's scary to think these people are living amongst us."

Ultimately, Pizzagate Massacre has a complicated relationship with Austin. Valley definitely needed some footage of Duncan on Sixth Street. "If you're a conservative type who looks at Austin from the outside," Valley said, "I think you might see all of Austin as represented by Sixth Street, where it's just debauchery all the time. It's appropriate that Duncan has some revelations in this place."

But there's a darker stream at work, something perhaps baked into a certain libertarian Texas mindset. There's no question you can draw a straight line from the JFK conspiracy dude in Slacker directly to someone like Duncan. What was once a vaguely amusing aspect of Eighties counterculture has now become fully weaponized. Valley emits a grim chuckle. "If you make movies in Austin, you do your level best to swing away from Slacker, which is an incredible movie from a filmmaker I love. But Alex Jones is in Linklater's work (Waking Life, specifically). I doubt he will be anymore but, as I have said when talking about this movie, this sort of thing is funny until it's not. And it's really not anymore."

Since the movie was made, Valley has talked with former InfoWars employees, some of whom have wondered why he would make a movie about something so horrific. "I said, 'Look, I'm never going to make a movie that is more offensive than what actually happened at InfoWars. Don't be mad at me for the story you were selling.'"

The Pizzagate Massacre is available on VOD now.

A version of this article appeared in print on November 19, 2021 with the headline: Lizards of Sixth Street