Plus good news about the Texas production incentives 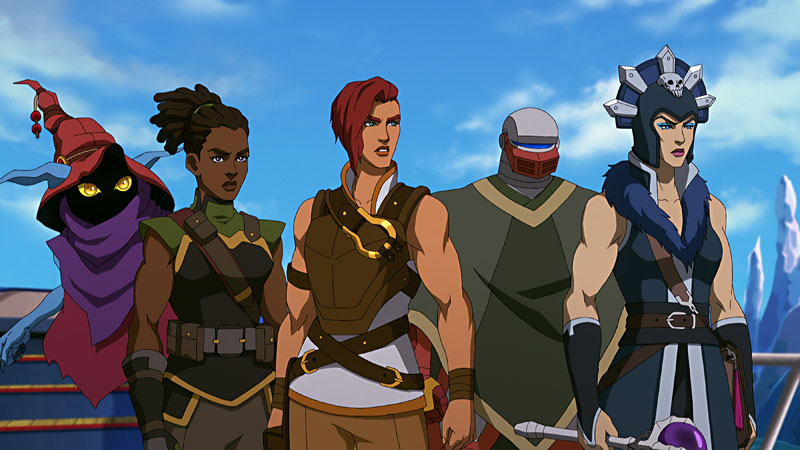 Masters of the Universe: Revelation

Texas film, gaming, and TV incentives roll on. In the recent session, lawmakers allocated $45 million to fund the Texas Moving Image Industry Incentive Program over the next biennium. That's a 10% drop from the current cycle, in line with the budget cuts requested by Gov. Greg Abbott in response to the pandemic-induced budget crunch. That's good news, but industry insiders still worry it's not enough. Rebate programs like TMIIIP are a huge factor in how producers choose locations, and the concern remains: What happens if the pot is emptied before the next session?

They have the power! Masters of the Universe: Revelation is another smash for Austin's Powerhouse Animation. The Netflix original, picking up where the original beloved 1980s animated series ended, was a Top 10 success on the streamer when it launched last week. Starring Chris Wood as Prince Adam and Mark Hamill as Skeletor, but centered around Sarah Michelle Gellar as Teela, the five episodes in Part 1 were written by Clerks creator and longtime Powerhouse friend Kevin Smith. Smith gave a quick update on Part 2, making it clear that there will not be a long wait: Composer Bear McCreary has already recorded the live orchestra score for episode 10, and the sound mix is complete on episode 8. He tweeted, "Part 2 is officially picture-locked, nearly wrapped, and ready to go!"

Speaking of animation, gen:LOCK, the sci-fi mecha anime from Rooster Teeth studios, was confirmed as coming back for season 2 on HBO Max when the Austin-based studio dropped a clip as part of last weekend's Comic-Con@Home. The series, featuring the voices of Michael B. Jordan (Creed, Black Panther), Maisie Williams (Game of Thrones), and Dakota Fanning (Coraline, The Alienist), depicts a future where the last of civilization is protected by giant robots piloted by psionically linked humans – a link that comes at a cost. Look for new episodes soon.

North Austin Drafthouse fans, rejoice! The Alamo Village, the oldest surviving cinema in the chain and the last Austin location still shuttered due to COVID, is currently scheduled to reopen on Aug. 13. Sadly, that means it just misses its 20th anniversary, as the four-screen location on Anderson Lane originally opened in July 2001 – the second Alamo, coming just two years after the first (and now closed) theatre at Third and Colorado.

Feel like films in Fredericksburg? Still time to grab a ticket for the Hill Country Film Festival, running July 29-Aug. 1. The festival kicks off Thursday with a selection of shorts including works by Austin-based filmmakers Zachary T. Scott ("Space Case") and Kelli Horan ("A Grievance With Gravity") at Hoffman Haus before an opening-night, free gala screening of Robert Rodriguez's Spy Kids in the historic Marktplatz, presented by the Texas Film Commission. The four-day event wraps on Sunday with a send-off and awards ceremony at Pedernales Cellars. Passes and info at hillcountryff.com.

aGLIFF, the All Genders, Lifestyles, and Identities Film Festival is adding some Hollywood glamour and London style to its lineup with two big additions. This year's opening movie for Prism 34 will be Blitzed: The Story of the Blitz Kids, the story of the club that launched mainstays of Eighties British music like Boy George and Ultravox, and future fashion gamechangers including Darla Jane Gilroy and Michele Clapton. The centerpiece will be Boulevard! A Hollywood Story, the strange but true story of Gloria Swanson's never-staged musical adaptation of her career-defining role as faded silver screen star Norma Desmond in Sunset Boulevard. aGLIFF Prism 34 runs Aug. 26-Sept. 6. Passes and info at agliff.org.

A tragic loss for Austin's gaming community with the recent death of Andrew Hackard, the guiding force behind the Munchkin card system. His job description may have been "line editor," but Steve Jackson Games gave him the honorific title of "Munchkin Czar," aka the Red Pen of Doom. Since 2009 he helped formulate the wild sense of humor that defined the game and made it a huge global success. Longtime Munchkin illustrator John Kovalic described him as "ridiculously talented ... faster and funnier, but also kinder," while company founder Steve Jackson said, "I'm lucky to have had Andrew's help all these years, and proud to have been his friend."

Cue eyerolling among local filmmakers and gamers as the first images leaked from HBO's TV adaptation of The Last of Us. Fans of the post-apocalyptic PlayStation smash will remember that the opening sections are set in Austin. However, the ATX segments are being shot in ... Fort MacLeod, Alberta, Canada, which has also served as a location for Interstellar, Brokeback Mountain, Let Him Go, and the upcoming Ghostbusters: Afterlife. Sigh. Can't compete against those generous Canadian production incentives, even for projects set in Austin.