The Austin film and TV scene has come back strong, but can that return be sustained? 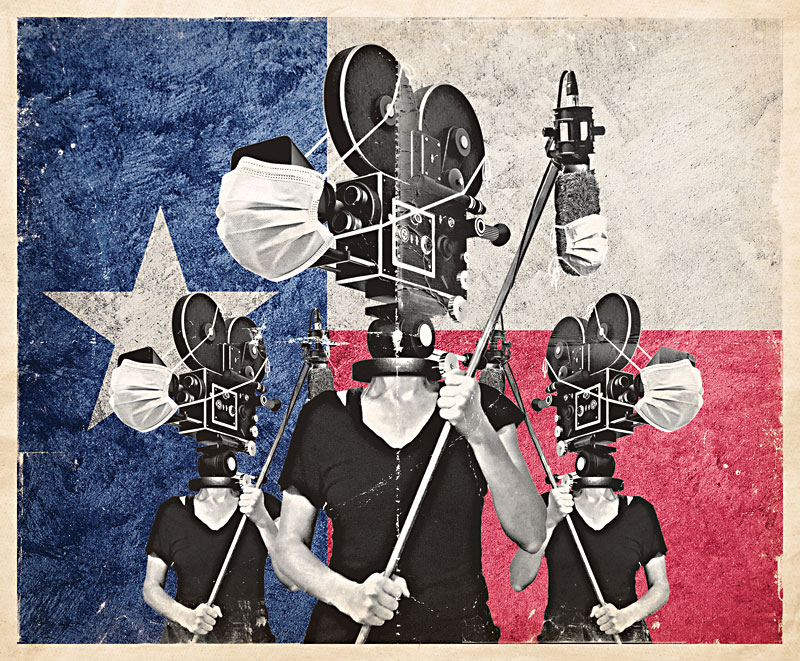 A year ago, the future looked bleak for the Austin film and TV scene. Production shut down on March 13 on all the big shows in town, and small productions had no clear path to getting going. When the Chronicle talked to an array of industry professionals living in the area – from HBO producers to prop manufacturers, studio managers to commercial directors – the future was murky and dire, and no one knew whether there would even be an industry on the other side of the pandemic.

Cut to July 2021, and a check-in with Austin Film Commission Director Brian Gannon paints a surprising picture. "There are a little under two dozen boutique commercial production houses in Austin, and they're all flourishing, Every equipment vendor I talk to, they're out of portable toilets, they're out of anamorphic lenses. Our equipment is booked out, and the facilities are getting there too. ATX Studios is full, Austin Studios is full, Troublemaker has a number of productions lined up, and then a lot of medium- and small-sized production studios have a ton of business too, to the point that we're looking at warehouse spaces for some of those bigger shows that are coming in."

“It cost a lot of money, but our industry could teach a master class on how to operate in a pandemic.” – Austin Studios Director Martin Jones

It's clearly still an uneven landscape, with the shutdown forcing many craftspeople to find other employment, leave the state, or burn through their savings. But Texas, and especially Austin, is on a surprising hot streak. As one of the first states with major production facilities to reopen for filming, studios moved fast to either start production or, as in the case of Amazon's Panic, wrap up shooting that they'd been forced to suspend. Before the end of the year there will be four major productions – including the return of the CW's surprise smash Walker, AMC's shambling leviathan Fear the Walking Dead, and Robert Rodriguez's Hitchcock-inspired Hypnotic – shooting in the Austin area alone. Gannon said, "It started to become apparent last summer [that] there was a demand for content, they needed places to shoot it, and they needed to do it safely." What followed was "a coordinated effort of having everyone come together to move ahead."

Clearly, when word came from the governor's office last June that production could resume, it wasn't going to be business as usual because everyone was terrified of being the production shut down by a positive COVID test. Texas Motion Pic­ture Alliance Communications Director Mindy Raymond explained, "We didn't want to have a target on our back." At the national level, the film and TV industry moved fast to create its own safety protocols: the craft guilds (SAG-AFTRA, IATSE, Directors Guild of America, and the Teamsters) drafted the Safe Way Forward rules, and they were not shy about shutting productions down for violations. The TXMPA and local film commissions became phonebanks, answering technical questions from productions dealing with a positive test, or filmmakers worried they would be blacklisted if they didn't come back to work immediately. Raymond said, "If we didn't know the answer right away, we knew who to contact." At the same time, she saw an incredible sense of camaraderie in the industry, like commercial producers coming together to make sure that they weren't damaging each other in the bidding process. "They were linking arms even if they were competing with one another."

It's been a challenge, especially as a mesh of local and state regulations have created a confusing, sometimes contradictory working environment. Raymond said, "We'd be taking three steps forward, and then there's a shutdown, or a new mask mandate, and a production would have to pivot to remain within the guidelines."

Austin Studios Director Martin Jones put the situation positively but bluntly. "It cost a lot of money, but our industry could teach a master class on how to operate in a pandemic." And he wasn't kidding about "a lot," as Gannon estimated that productions were paying a 25% pandemic premium to cover additional costs, from constant testing to operating a completely sealed set. The reality is that this is the new normal, for at least the foreseeable future. "From everything I'm hearing," Jones added, "COVID protocols will remain in effect for the next year."

But just because things are looking rosier than expected now doesn't mean they'll stay that way, and both Gannon and Raymond cast a weather eye to the perennial block to the industry's expansion: the Texas Moving Image Industry Incentive Program, aka TMIIIP, aka the state's production incentives. During the legislative session, lawmakers assigned $45 million for the next biennium: That's a drop of 10% from the current two-year cycle, which was less than many feared in a pandemic budget crunch, but it won't last long. "We never have any problem spending it," said Raymond. "We're checking the couch, looking for extra pennies."

Austin-based filmmaker Aaron Koontz was one of the indie producers who managed to navigate the budget stresses of the pandemic, but, he said, "We had to shoot everything outside of Texas because they wouldn't give us our incentives."

To support all those big productions, Austin needs more crew, but without incentives there are no guarantees that the work won't dry up in a year, and incentives remain a primary driver on where shows go. "We're painted in a corner," said Gannon. "It can be difficult to grow the crew base when we could run out of incentives [before we get] all the way through the biennium."