Then: "If you're not comfortable wearing a mask, you won't be on set."
Now: "People ... were not very conscious of their own personal hygiene and that's changed tremendously." 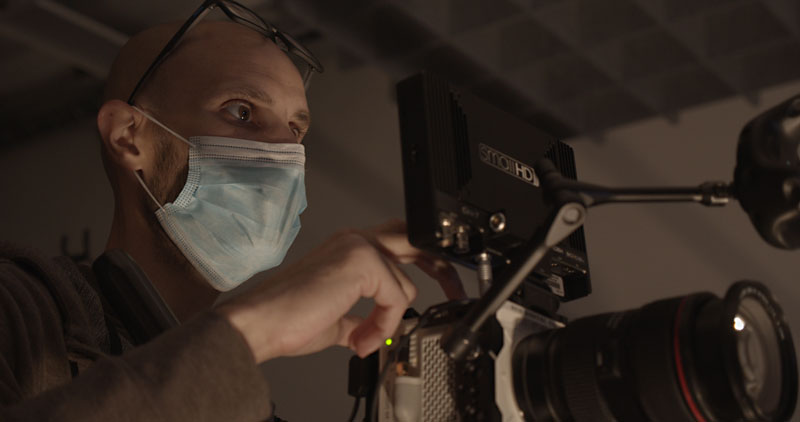 After a year on hold, freelancers like director/director of photography Justin Kirchhoff are reflecting on what the slow shift from the pandemic shutdown has meant for their businesses, while looking forward to future plans. "From last year to this year we've seen an influx of people becoming more comfortable with being in person and actually producing live video," he said.

As sets have begun opening back up for work on a more consistent basis, he's noted that the health-conscious regulations continue to be maintained as an indefinite new normal. He cited the craft services as a specific example: Meals are individually wrapped lunches as opposed to picking from a spread on a table. He said, "It's not a huge change, but it does affect people in a positive way and little things like that will stick for probably years to come. But things like temperature checks will probably fade out over time."

Though productions are moving forward with a health-conscious outlook, Kirchhoff says he hasn't seen anyone take things as far as requiring vaccinations to be on set, a prospect which perhaps didn't seem out of the realm of possibility as the world adapts to living with COVID. "We don't want to pressure anybody into feeling uncomfortable," he explained. "That's a personal choice and that's why we've kept the temperature checks readily available." In any case, there's been a clear shift in individual efforts to keep things sanitary: "There's just people that were not very conscious of their own personal hygiene and that's changed tremendously."

Along with freelance work seeing a revitalization, Kirchhoff has also been able to keep busy with the opening of Co-Production House, a new soundstage here in Austin of which he is the co-founder. "Not to eat all the icing on the cake, but it's been really great," he said. The studio has given him and his team an opportunity to allow other filmmakers to access state-of-the-art technology called Volume to replicate realistic backdrops in-house. The tech is already something that would be in demand for its convenience and efficiency, but it's even more useful for productions worried about pandemic travel – and Kirchhoff is making sure everyone feels comfortable inside his studio. "We require masks walking around in the studio. It's no different than walking into H-E-B and having to wear a mask."

As industry work begins to ramp up in earnest and Kirchhoff opens the doors of his studio to more clients, those priorities of safety and comfort for everyone stay at the forefront. "People are really respecting the rules. If they weren't doing that, we wouldn't have them in the space. It's as simple as that."