Then: "I'm lucky to have two movies coming out. I can't complain too much."
Now: "Next thing I know, we had six films in post." 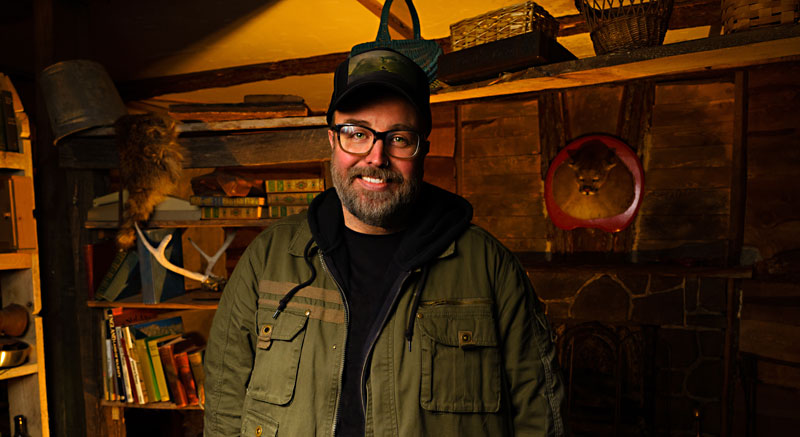 Aaron B. Koontz on the set of Old Man

Indie filmmaking is all about downtime between occasional shoots. So when Aaron Koontz, co-founder of Austin/L.A. production house Paper Street Pictures, saw the pandemic was settling in for the long haul, he saw an opportunity. Distribution for his horror anthology, Scare Package, was set, and so he could dedicate some extra time to postproduction on his cowboys vs. witches Western, The Pale Door. After that, he and longtime creative partner Cameron Burns were going to work on a few scripts. Instead, he ended up with the biggest production slate of his entire career.

Initially, he said, "There was this weird moral dilemma of, is it right to go back to work?" Then he and the rest of the Paper Street team saw how many cast and crew members were desperate for work, and they made a decision: "If this needs to go, then we can put it together safely. ... Next thing I know, we had six films in post."

They'd attracted industry attention because of what they'd achieved on a shoestring budget with Scare Package and The Pale Door; now, as productions were rejigging budgets to include pandemic health and safety protocols as a major line item, Paper Street became their destination. "Because we're so efficient elsewhere," said Koontz, "we were able to make things happen."

There's Old Man, the next feature from Lucky McKee; Snow Valley, the directorial debut of The Hitman's Wife's Bodyguard scriptwriter Brandon Murphy; Revealer, a new horror from comic writers Tim Seeley (Hack/Slash) and Michael Moreci (The Plot); found footage horror Shelby Oaks; and The Requin, a shark survival-horror film in Florida starring Alicia Silverstone, which he called "easily the biggest Paper Street film to date." All of those are in postproduction, as is one more unannounced title, plus three more currently in production, one of which he is directing. Plus, somehow in all this, he signed on as head of development and production for Blood Oath, a consultancy group for horror filmmakers. "It's been completely, utterly wild," said Koontz.

There was no big secret to Paper Street's success. It was simply about having safety protocols, and sticking to them. They worked closely with the craft guilds, and did everything required to make sure the production would not be shut down. For one shoot, they booked out an entire conference hotel. The cast and crew slept at one end, and the other they turned into a sound stage and built the set, an entire two-story house. All meals were preprepared, and sanitation was the No. 1 concern. "You just have to be really, really strict," he said. "We had to fire people off-set. 'You broke our bubble, you have to go.'"

Across all the sets, there was only one positive COVID-19 test, and that turned out to be the hotel bar's fault for breaking their own protocols. Still, Koontz said, "I felt awful. We went, 'Did we put somebody at risk?'"

The biggest disappointment within all this success is that he's had to shoot every film outside of Texas because the state's production incentives are still so weak. Still, Koontz has never forgotten Paper Street's local links, especially when it comes to crewing up. "We're not making them in Austin, but we're bringing people from Austin."

Read our original 2020 interview with Aaron B. Koontz here