What Next for the Former Alamo Ritz Location?

After the Alamo, an unclear future for the historic Downtown cinema 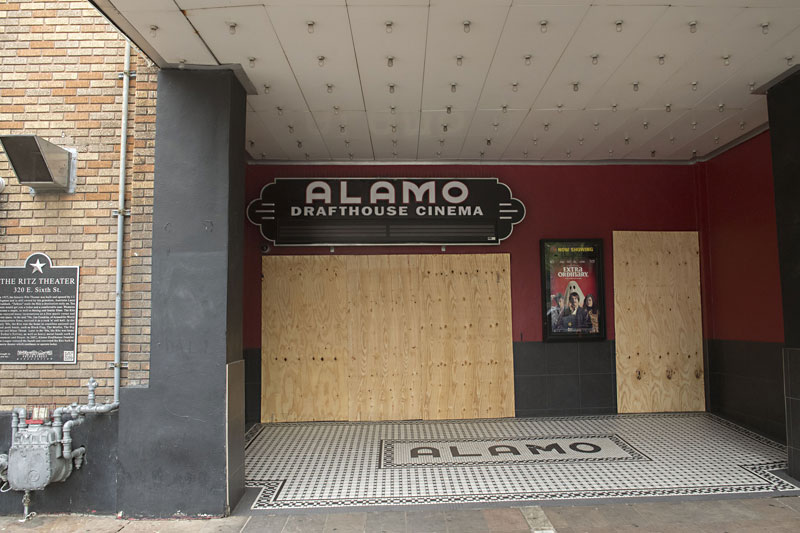 The Alamo Ritz, boarded up in 2020 (Photo by John Anderson)

Take the Alamo out of the Ritz, and it's still the Ritz. The Draft­house's signature Sixth Street two-screen location may have been a familiar sight to locals and out-of-town visitors, and the tiled entrance, with the Alamo logo picked out in black tile on white, has made it synonymous with the local chain. But with the Drafthouse officially giving up its lease as part of pandemic­-related cost-cutting, the historic structure's exact future is unclear.

Its past, however, is historic and storied. As Downtown Austin properties have been increasingly shuffled between out-of-town investors and anonymous holding companies, the Ritz is a rarity, having stayed in the same family since opening day. It traces its history back to 1929, when J.J. Hegman opened it as the first theatre built specifically for the talkies. It was also the first integrated cinema in pre-desegregation Austin (not wholly integrated – Black audience members were only allowed in the balcony). Eight years later Hegman handed management over to his son, Elmo Hegman, and in 1991 the site was transferred to Elmo's niece and nephew, Bette Linbeck and Judge Larry Craddock, who in 2007 moved it under Craddock Properties LLC.

Yet while ownership has stayed constant, the building itself has changed purposes. It has been a cinema, a music venue, a bar, the onetime home to Esther's Follies, and even an XXX-rated grindhouse. Since the Drafthouse renovated the site back in 2007 as a replacement for the chain's original location at Third and Colorado, it's been a prestige venue, hosting new releases, 70mm archival screenings, and fan favorite shows like Master Pancake.

Letting it go was tough for Alamo founder Tim League personally, who oversaw the conversion from a bar into a working cinema, and his family's fingerprints are literally in the construction. "It was the last one my father did the table refinishing, but ultimately it's a two-screen theatre, and it's hard to make money." The economic reality was that, for all the prestige and its role in the local and national film scenes, running the Ritz has been more about passion than profit for the Alamo, and in the current economic situation reopening it would have been financially irresponsible.

But that doesn't fill the hole left in Austin's festival scene. It's been a core venue for national events like South by Southwest, and out-of-town visitors would schedule their day around a combination of programming and being able to grab a meal there. "People want their chips and queso, they want their buffalo cauliflower," said ATX Television Festival co-founder Emily Gipson. A regular guest herself, she's programmed her festival in the Ritz since its second year, and the news of the closure hit when she and her team were busy putting this year's virtual fest together. However, it had to go on the back burner: She said, "We can't worry about what we're going to do in 2022 when we're just trying to get through 2021." Yet she was astounded by how many festival regulars contacted her and asked if there was any fund to which they could donate, or petition they could sign. The Ritz was just so pivotal to the festival's identity, and even to the programming. "Between the Stateside, Paramount, and the two spaces in the Ritz, we could fit any part of our programming." What they do to replace that invaluable space, she said, is "to be determined."

Austin Film Festival's involvement with the Ritz predates the Drafthouse days. Founder and Executive Director Barbara Morgan recalled hosting screenings upstairs in the mid-Nineties, when downstairs was still a dive bar. It remained a home to AFF screenings through to the early Alamo era, but after a couple of years screen rental costs became prohibitive, and so AFF concentrated its Drafthouse screenings at Alamo Village. However, she still saw the damage to the cinematic ecosystem. "We don't have a lot of screens Downtown," she said, noting that many of them used by festivals are multiuse facilities that happen to have screens, and that's just not the same. "People like seeing movies in a movie theatre."

However, all hope is not lost. League said that he is "actively" working with Craddock Properties to keep some kind of cinematic and performance presence. "Nothing would make me happier," said League. "We left a lot of gear there, and we're open to being a part of seeing someone get set up in there."