Into the Downtown rabbit hole with local comedian Mohit Jasawal Like every Austinite, Mohit Jaswal has a love/hate relationship with Austin's most internationally iconic thoroughfare. "Sixth Street is one of the worst streets in America," he said, "It's awful and horrible, and we all have to do it at some point, but I just think it's fascinating."

Still, the love was enough to spark Jaswal to make free-form Austin comedy-drama Night on Sixth. Filmed in 2019 (back when wandering around and meeting random strangers was still a thing) it makes its premiere at Austin Asian American Film Festival with a special screening outdoors on June 16 at the Long Center.

A fixture on Austin's improv comedy scene as part of the Y'All We Asian comedy troupe, Jaswal's best known in local film circles for bizarre and hilarious shorts like "Butt Fantasia." The short (which can only be described as an anally fixated musical odyssey) may seem a long way from the loose, observational style of Night on Sixth, but provided the unexpected trigger for his feature. It screened at the Slamdance Film Festival in 2019, and while he was there Jaswal went to a panel by Moonlight co-producer Andrew Hevia about the state of the Florida film scene. "I basically wrote down everything that he said," said Jaswal. The core of his advice for making a film was "to make it as personal as possible," and Jaswal took that to heart. With co-writer Redd Jefferson, he assembled a cast drawing from the established talents he knew through the Austin scene. "I don't do casting calls. I just see what my friends are doing and mold the roles around them." That included Yola Lu as Yola, the aimless protagonist facing big decisions about her future, and shirking making any choices with a night of drinking with strangers Downtown.

"Everybody in the film is from the comedy community," said Jaswal. "They're all incredible improvisers, and I knew that they all knew each other, so the connections were going to be there."

“Sixth Street is one of the worst streets in America, [but] it’s fascinating.”

Initially, Jaswal planned to make the entire film on Dirty Sixth, but moviemaking reality set in fast. "The chaos of that street is too much to handle," so he shifted focus to the cultural space that it fills in Austin. "It brings into the mind a certain feeling of recklessness. You go there to get messed up and evade your problems." That decision liberated the film, opening it up for a ramble around locations that, while familiar to Austinites, aren't from the tired list of Hollywood B-roll regulars (no long walks across the Ann W. Richards Bridge, he confirmed). That choice came from one of Hevia's most important lessons: "To not be a tourist in your own movie. ... Don't be amazed at things the character would not be amazed by." Thus, no Instagram photo-op hot spots. "Yola wouldn't go see the bats."

That's why Yola's journey (inspired, Jaswal said, by Alice in Wonderland) takes in stops like the Central Library, the bench across from the Paramount, and the Hideout. Access came from calling in favors: a friend who worked at Cosmic Coffee vouched for them with management, and access to a holy of Austin cinematic holies, the projection booth at the Alamo South Lamar, happened because at that time Jaswal was working there as a projectionist. Then there were some quick shoots that were more about seeking forgiveness later than asking permission. "At one point we were on a bridge and two cops walked past us. I thought, 'Argh, now we're done,' but they just went, 'Good luck with the shoot, guys!'"

Looking back at the film for final edits before its AAAFF premiere has been "devastating," Jaswal said, "because at least three locations have changed since then. MugShots is gone, the Ritz is gone." Even the opening sequence, with Yola staring out from the patio at the Alamo Mueller across vacant grassy lots is now an artifact of a different Austin. "I went back there recently and it's covered in construction." 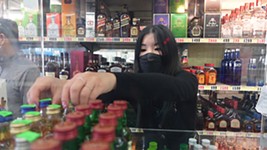