The queer film canon is an ever-growing coterie of movies based around the experiences of LGBTQIA individuals, but it can also be something very personal. Taking this upcoming Pride Month as ample opportunity, aGLIFF, the Austin-based All Genders, Lifestyles, and Identities Film Festival, is hosting its Pride Mini Film-a-Thon, a selection of four narrative features and two shorts programs, all of them worthy additions to anyone's queer film canon.

While the queer filmography at large has no shortage of morose fare, this short virtual fest is meant to beam into viewers' homes and give them a warmer, more positive feeling in advance of the full hybrid festival, scheduled for Aug. 26-Sept. 6. "I hope people come watch [the Film-a-Thon] virtually at home, dressed up or in their boxer shorts," said aGLIFF Vice President Todd Hogan-Sanchez, "and realize just how fantastic an aGLIFF festival can be. Then they just are left wanting more, and will come and join us in August for our hybrid festival."

“I hope people come watch [the Film-a-Thon] virtually at home, dressed up or in their boxer shorts.” – aGLIFF Vice President Todd Hogan-Sanchez

Bears Rebecca Fonte, artistic director and programmer for aGLIFF, said her aim in selecting the four films (Sublet, No Ordinary Man, Cocoon, and Nora Highland) was to "inspire and instill pride." All four features represent different parts of the queer community, which Fonte explained was a deliberate decision and not confined to just making sure all the alphabet letters were accounted for. While there is diverse representation in both the characters in the films as well as their international origins, the four films also explore many issues being faced by LGBTQIA folks – including the specific struggle for queer people within the film industry. Nora Highland, Fonte says, is one of the most important films in the fest as "it speaks to queer authenticity, which is a real problem right now in our industry."

"We have so many films that portend to be queer," she said, "but they are being directed by straight people who are hiring straight actors to play these roles. And it's very difficult to get anything that feels like a real experience."

Both Fonte and Hogan-Sanchez recalled their own history in finding themselves, and pride, in cinematic queer representation. "I often talk about a little shelf of VHS tapes that got me through my 20s and 30s," Hogan-Sanchez said. "And every time I was feeling, you know, down or depressed or like I was never going to find love or happiness, I would go to that little row of VHS tapes, and they were all queer films."

Fonte's own personal coming-out, she says, was directly tied to a film she saw at an aGLIFF screening – Boy Meets Girl – which presented to her the first depiction of a trans woman who she could relate to. "She's just living her life as a cute girl, you know, like, having relationships and, and I was like, 'Oh, see, I can be that.'"

Through aGLIFF virtual fests like the Pride Mini Film-a-Thon, Fonte said she hopes to give folks from Odessa to Midland to San Angelo access to that same euphoria: "You're going to have people who have never really gotten to see themselves on screen and it opens your eyes [to] an experience out there that makes sense to you."

The aGLIFF Pride Mini Film-a-Thon screens virtually June 4-6: access is free for aGLIFF members; badges are $25 for nonmembers. Details and passes at agliff.org. 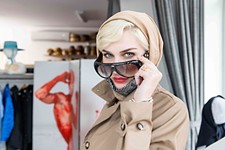 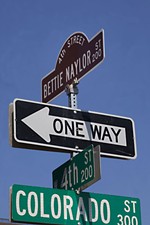 What's a Little Rainbow Crosswalk Between Friends?
Plan to celebrate the gayborhood heads to Council