Sparxs Studio Is Turning Cinema Into a Single Mom's Game 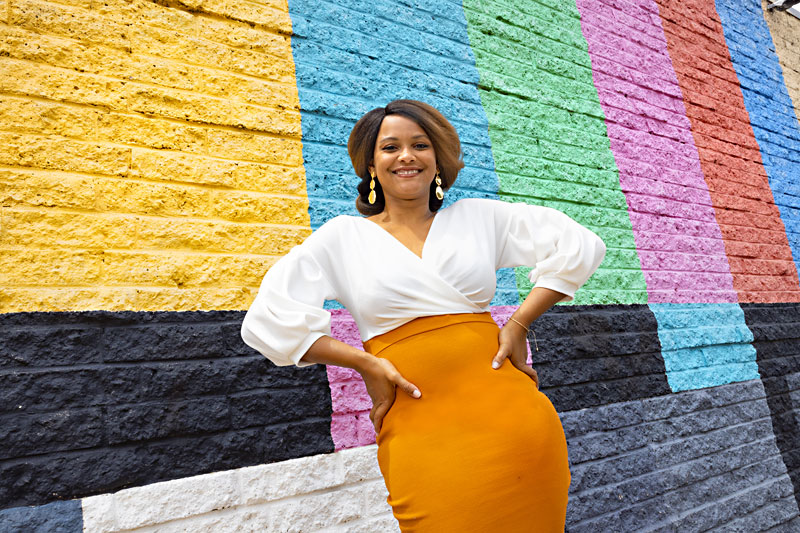 Samenta Bruington isn't just another California transplant. In fact, she hardly chose Austin at all. Bruington was all set for a career in Hollywood: taking classes, joining a union, and connecting with people and resources that could lead her to a stable income in the film industry. But against her will, Texas chose her, and now she's founded a new production house, Sparxs Studio, in Austin.

Bruington's grandparents are responsible for sparking her love of film. "Turner Classic Movies, that whole catalog. A lot of white people that are dead now. But they were a part of the Black Screenwriters Guild of L.A. So I was also exposed to classic Black cinema as well," she said over Zoom, sitting under a framed poster of Spike Lee's Malcolm X.

Bruington grew up in a military family, often moving around, and while she considers herself a Californian, she had her two children in Fort Hood. As a single mother, she had support to be able to leave them in Texas temporarily and check out Los Angeles on her own, but when she resolved to move there, custody laws got in her way: "The judge said I could go, but I had to leave them here. I told him, 'You're making me choose between my career and my children!' And he said, 'Life is like that sometimes.' So I decided to stay. But I'm a very tenacious person. I don't like being told no."

Without a hitch, Bruington began mapping out what a Texas entertainment career could look like. Austin is no Hollywood, but it didn't take long to uncover why that's a good thing. "[Austinites] just get it done. In L.A., you gotta have permits. You gotta have a lot of stuff in order. But Austin is amazingly open and welcome," she said. In 2017, Bruington had been daydreaming about shooting something in the golden-doored elevators of the Driskill Hotel, but didn't think she could afford it. "But my art department manager Capri [Isles], she was like, 'Let's just go in! Let's just talk to them!' We were literally partying on Sixth Street. And we went in and said, 'Hey, we're filmmakers. We'd like to use the elevator. Can we?'" They got the location for free.

“[Austinites] just get it done. In L.A., you gotta have permits. You gotta have a lot of stuff in order. But Austin is amazingly open and welcome.” – Sparxs Studio founder and CEO Samenta Bruington

That elevator scene evolved into the award-winning short film "Seeking Woman $$$," the first project under the Sparxs Studio shingle. As of March 2020, Sparxs is an official LLC, with Bruington as its founder and CEO. "I wanted there to be a place for people who could not afford to live in California," she said. "Or if they had some kind of circumstances where they couldn't go to these giant cities where filmmaking careers are happening. I wanted to provide opportunities here."

Bruington organically found a community of other Black women and single mothers. "Honestly, I don't have to seek them out," she said. "It seems like they find me." Some of her collaborators found her via Twitter, some through mutual friends, and others on film shoots around Austin. Sparxs now employs four women full time (Bruington, COO Danyelle Weatherford, EVP of Devel­opment and Acquisitions Alexandra Varka­rotas, and Senior Accountant Khai Parker), and Bruington estimates that they've been able to give freelance or part-time work to 20 people total. It's an impressive number for a company that's only been around for a year, especially when that year coincided with the beginning of a pandemic. But Bruington isn't satisfied yet.

The pandemic inspired a new project called Indie Sparxs, a new platform where audiences can get to know indie filmmakers and their work. Bruington called it "Spotify for film ... a creative ecosystem of filmmakers, theatres, and film festivals, working to cultivate the virality that you see in platforms like TikTok, or even Prime Video or – I'm always afraid to say Netflix, but I'll say Netflix." She plans to launch beta testing of Indie Sparxs in June, hosting work from several Texan filmmakers. However, creatives from places as far as India, Turkey, and Nigeria are already reaching out to participate once Indie Sparxs goes global.

On the production side, Sparxs has already met one of their major goals for 2021: Their new short film, "Tiger Eyes," which follows a biracial child learning to connect with his Asian heritage, is now on the festival circuit. Writer/director Kelly Riot was the cinematographer on "Seeking Woman $$$" and showed Bruington her script for "Tiger Eyes" after it had won a few screenwriting awards. Bruington fell in love: "I was like, 'Who is going to be producing it?' And she was like, 'Well, can you?' And I gave her a budget."

Long term, Bruington and Sparxs are also developing a bar-hopping anthology series called Tequila ("It's my love letter to Austin," Bruington said, "because Austin has been a city that's given far more than it's taken.") As if that's not enough, she's now dreaming up how the company can move into Austin's commercials market, as well as working with educators, including possibly UT Austin. "There are tons of creative dollars at work there," she said, "What I see for Sparxs in five to 10 years is that I'll definitely be able to service more than 20 people." But even with all that ambition, she's working toward a bigger picture than just career success, so that her employees don't have to choose between their work and their personal lives the way that she had to. That judge may have rerouted her Hollywood dreams, but Bruington now has the balanced, creative lifestyle she'd hoped for, and she wants to offer it to her community in the city she now calls home. She said, "I see a culture of allowing people to go out into the world and be happy."