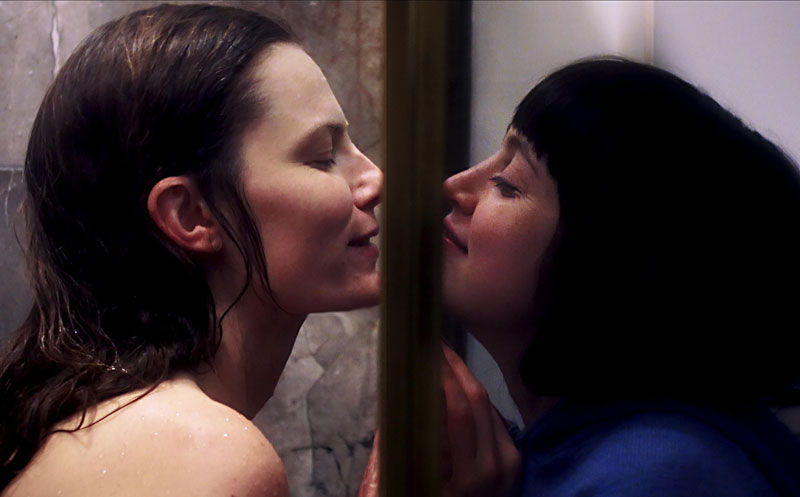 Lindsay Burdge and Tallie Medel in Austin-made The Carnivores, streaming this weekend as part of Panic Fest

"And they all lived happily ever after." That short phrase may be the most intriguing words in literature, and sometimes you wonder when ever after begins. Austin filmmaker Caleb Johnson's alternative romance The Carnivores was supposed to debut at South by Southwest 2020, but the pandemic derailed those plans. However, this weekend it streams alongside two other local films (John Valley's Pizzagate satire Duncan and the Sundance-selected dark fantasy The Blazing World) as part of Kansas City's Panic Fest.

In the film, "happily ever after" is a dangerous invitation. Alice (Tallie Medel) has found contentment with Bret (Lindsay Burdge), but then it seems like everything falls apart at once. Their dog is dying, and Alice has developed a strange new obsession with raw meat. That, and she has started walking in her sleep. Her world is tumbling in different directions, and for Johnson that makes this superficially strange story instantly recognizable. He said, "The thing about being in a relationship for a long time isn't that you fit perfectly. It's the fact that you remain individuals and have things about each other that you still don't understand."

Alice personifies that sense of confusion, and that made for a very demanding part – not least because she spends a lot of time around, eating, and sometimes even covered in raw meat. That was a lot to ask of an actor, so that's why Johnson turned to Medel. The New York-based actor and dancer led his first film, 2014's Joy Kevin. "She is nothing if not bold and adventurous – not only being able to try those things, but being able to sell them in a way that very, very few people I know would be able to do."

For long-suffering Bret, the casting of Burdge came from another personal connection: this time director of photography Adam J. Minnick, who worked with her on 2017 feature Actor Martinez. Johnson called the decision to get her onboard "a slam dunk," especially once he saw her and Medel together. "From the first 30 seconds it was just obvious that they were going to be fantastic together."

Yet, like relationships, filmmaking is the art of happy accidents. As Alice is dealing with what feels like implosion, she is plagued by a tedious workplace lunchtime buddy (Austin actor Vincent James Prendergast). At first, Johnson wasn't sure whether their scene would work, as he'd only had time to chat briefly with Prendergast before shooting, and when he arrived on set they were running behind. "I had planned to have this whole conversation and go, 'Here's your talking points,' and we didn't have any of that. I just went, look, she's just told you that she's lost her dog and you need to be like, 'Oh, I know all these ways you can do to find it.'" What Johnson saw made him immediately add two more scenes, making Prendergast a one-man Greek chorus with hints of Milton from Office Space, whose appearances become chapter breaks within the narrative. "I couldn't believe what was coming out of his mouth," Johnson said. "It was very hard in the moment to hold it together. In fact, I didn't. I had to move away from the camera because my laughing was going to ruin the sound."

He described those scenes as both a tribute to Prendergast's improvisational talents (Prendergast, along with Burdge, Medel, and co-stars Frank Mosley and Jason Newman, got a writing credit for additional dialogue for his contribution), but also to Medel's physical presence and control. After all, he noted, she was able to perform while even the director was cracking up. "She doesn't say a thing in any of those scenes, but her physicality makes it work in a way I would never have expected. ... To have Alice going through all these things and trying to contain these things to herself, to have someone there to voice the things that she couldn't, and also trivialize them. So there is this implication that she is acknowledging these things in some way, and they're being reflected back to her in a way that makes her problem worse."

That's one of several unexpected strands of humor in this sometimes mordant tale of collapse. Yet equally, just because there's raw meat and dying dogs and somnambulism, that doesn't mean that Johnson doesn't see something deeply romantic in The Carnivores. "A long-term relationship can be a cycle of death and rebirth," he said. "It's not this one thing that you find at the beginning and it lasts for however many years until you die. You continue to change as people, and things seem like they're falling apart, and then you rediscover it."

The Carnivores streams as part of Panic Fest April 8-18. Tickets, passes, and info at www.panicfilmfest.com.