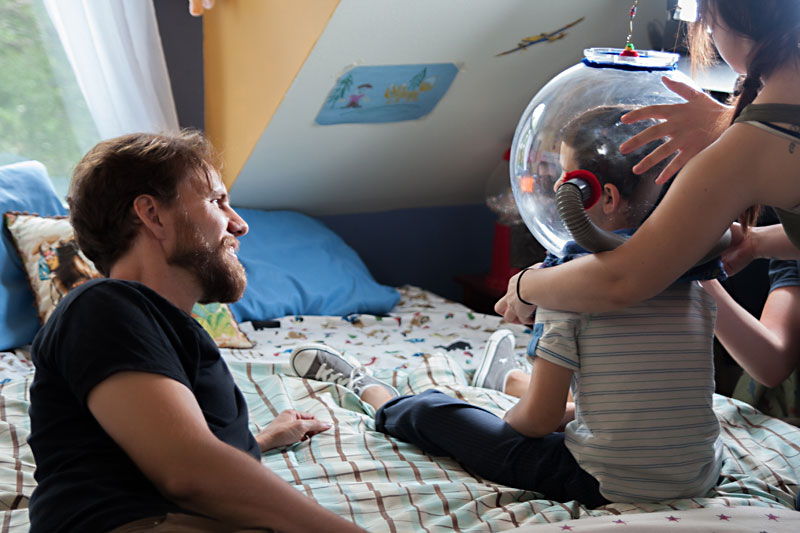 Director Micah Barber on the set of The Adventures of Thomas and Felix, with Bryce Gheisar as Thomas (Photo by Lisseth Lopez)

They say that making a movie is kind of like raising a kid. No one mentions that it takes about as long.

Writer/director Micah Barber shot his childhood magical fantasy, The Adventures of Thomas and Felix, around Austin in 2015. He wrapped post-production two years later, before starting a two-year festival run (you may even have seen it under its original title of Into the Who Knows! at Austin Film Festival in 2017). Late last year it was acquired by Gravitas Ventures, and now it's finally out in the wild world. To put that into perspective, if the titular Thomas was really 10 when the film was made, he'd be applying to college by now. "It's been a journey," laughed Barber.

His film is a classic, simple tale of two good friends, Thomas (Bryce Gheisar) and Felix (Delaney Wingrove). Thomas is a regular boy, a little shy and awkward. Felix is a little bit of a troublemaker but not in a bad way – just a little overenthusiastic. What else would you expect from an invisible fox?

Growing up in rural northern Michigan, Barber's own childhood involved a lot of time out in the woods "playing in the creek, just living wild and free out there in nature." Unlike Thomas, he didn't have an imaginary friend, but his little brother did. He had a bear called Bear, and when they would go into the woods, "Bear would come along on those adventures. That's something that's lost a little bit now. Childhood is handled a little different now." 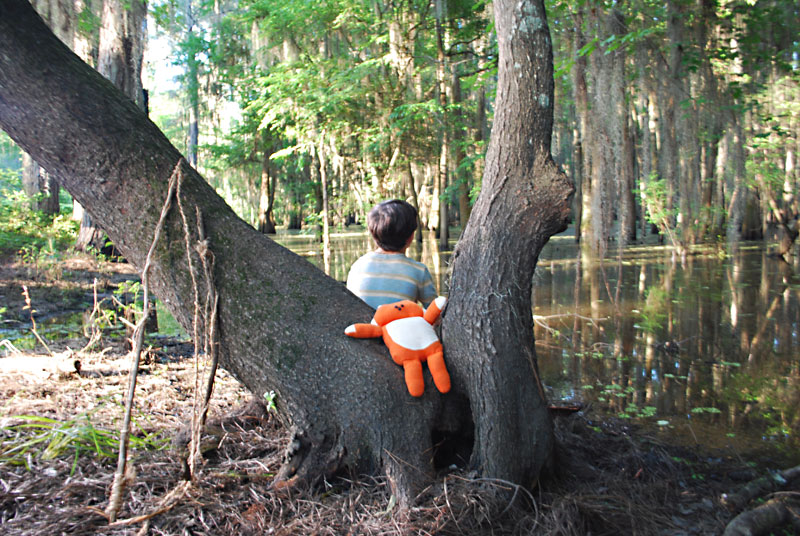 That's not just because parenting has changed: It's also a polite way of saying that it's tough to get movies aimed at children made now, especially small-to-mid-budget features that aren't piggy-backing off an existing character or brand. As his first kids film, Barber wanted The Adventures of Thomas and Felix to tap directly into traditional stories of growing up, like Pippi Longstocking, Where the Wild Things Are, and The Sandlot. "That stuff is so inventive, and it exists outside of these very controlled ways that things get made," he said. In creating a story that wouldn't talk down to kids, he looked to other filmmakers for inspiration. First, there was Ron Howard, who Barber had seen discuss the idea of "a movie without an antagonist." Second was Hayao Miyazaki of the Japanese animation house Studio Ghibli, and most especially his 1988 magical fantasy My Neighbor Totoro. In Miyazaki's stories, Barber said, "The world doesn't have the 'big threats.' That doesn't mean that bad or unfortunate things don't happen, or that people don't get hurt, but it's really just humans all just trying to figure it out, and often with a young protagonist at the center of it, trying to figure out, 'What is this messy world that I'm entering and how do I navigate it?' They're trying to navigate pain and loss, and the bigness of it all."

In the writing process, Barber was inspired by his own experiences: not just as a big brother to a kid who really, truly believed his teddy bear was alive, but also later, as a camp counselor himself. Looking back, he saw those years as time filled with what he called "existential questions for kids. ... What's the place for imagination? The 'what's beyond me?' questions."

He was particularly inspired by a question one of his producers, Alexandra Malick, told him that she and husband Terrence Malick always ask of their own children: "What do you wonder? Kids, everything is new to them, so they're always asking questions, they're always in new environments, they're always wondering. So taking a kid and plunking them into a brand new summer camp is something we just do to them. Just think about that. I'm sure you've had that experience in childhood where you go, 'Oh my goodness, I'm on my own, and now I have to fend for myself.'"

The summer camp is also one extreme instance of a natural setting for kids movies being co-opted for older audiences, as their wooden cabins and shaded groves were long the preserve of horny teens and sharp-bladed slashers. However, when Barber sends Thomas and his fuzzy stowaway Felix off to Camp Slumber Falls, the only threat is that the other kids think Thomas is kind of weird, and they can't understand why he still drags around a stuffed fox. As for monsters, there's no such thing: except for maybe the camp's mascot, the Great Forest Totem, and that's just a camp counselor in a silly costume ... or is it?

At the actual Slumber Falls, located just outside of New Braunfels, the actual biggest threat was the rain. When Barber and his crew shot on location in May 2015, it was the wettest month in recorded Central Texas history. "Everything flooded," recalled Barber. However, rather than try to reschedule the shoot (a major challenge, since Slumber Falls would be welcoming its real-life summer campers in only a few weeks), or wait for that morning's downpour to abate, Barber just stuck umbrellas in the hands of Thomas' parents, played by Austin acting mainstays and real-life married couple Lee Eddy and Macon Blair. By having the already-unwilling Thomas be abandoned to the wilds in the middle of a storm, he said, "It adds drama. 'Oh, man, camp sucks because it's raining so hard.'"

Yet now Barber's little film has gone through all its own unexpected storms, and he's experiencing the same pride a parent feels when their kid is ready to go into the world. Before this month's release, the biggest single audience The Adventures of Thomas and Felix had was around 300 kids and parents at the Tumbleweeds Film Festival in Utah. Now, he said, "It's everywhere." Aside from stores and VOD providers, a lot of libraries are acquiring copies, making it even more accessible for kids who can't take themselves to the theatre. "It's now going to places that I have zero connection to, and people are just going to start seeing it and experiencing it." After holding its hand for so long, Barber said, seeing it out there on its own is "a strange experience. It feels like it's going from being this little family, we made this movie and we shared it, and now it's having this life."

The Adventures of Thomas and Felix is available now on Blu-ray, DVD, and VOD from Gravitas Ventures.

A version of this article appeared in print on February 5, 2021 with the headline: To the Wonder