Not your regular Hollywood demon 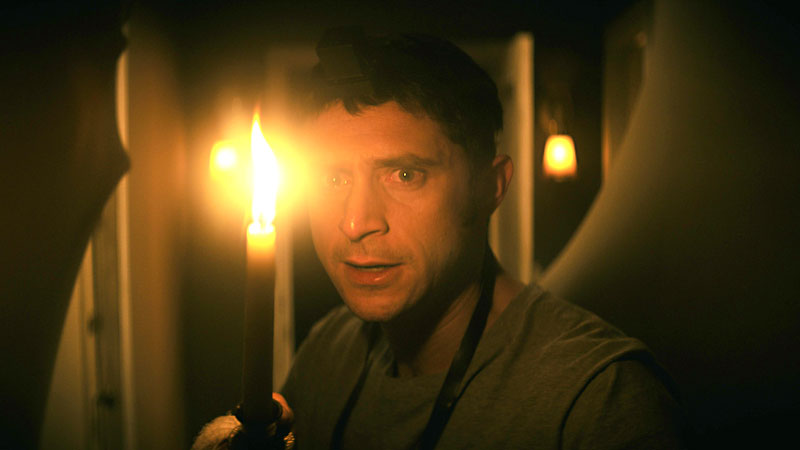 Since The Exorcist, American supernatural horror has become so synonymous with Catholic rites that it's rare to see a movie that looks beyond the Christian eschatological order of angels and devils. Yet for his first feature, The Vigil, writer/director Keith Thomas instead draws on Jewish traditions, giving audiences a new kind of uncanny force. Thomas said, "There's a hunger for stories from different perspectives and these culturally specific things that may not be familiar but that people can identify with certain universal themes in them."

The supernatural horror will be released by IFC Films on Feb. 26, but this weekend Texas audiences will get a sneak preview, courtesy of Austin's dedicated science-fiction and horror film festival, Other Worlds, as part of their year-round Virtual Orbiter screening series. It recounts one long night for two souls when Yakov (Dave Davis) is hired as a shomer, or guardian, to look over the body of the late Mr. Litvak (Ronald Cohen) and protect it from evil spirits before burial. Only it seems the spirits were there long before he took up his duties ...

Thomas didn't want to just put a Jewish spin on Christian horror, but instead create a truly Jewish horror film, weaving the Talmudic cosmology into his story. For a start, those myths don't have what mainstream (read: Christian) cinema would recognize as demons. Fortunately, he had a background in the topic. When he attended rabbinical school, he said, "My master's thesis was on monsters in the Torah." From his research he selected the mazik, whose name translates as destroyer. They are numbered among the shedim, the dark spirits of Jewish myth, but they are definitely not demons. "They are essentially animals. [They] are sparks of life who were made between the days of creation. They [were] never given a body and do not have a soul, and so they wander around and prey upon the life force of people."

Rather than the aggressive devils of Christian myth, hunting for souls to corrupt and steal, his version of the mazik is more like a tick. He explained that after ticks feed, "they'll drop off, all bloated, and they'll live off that blood in hibernation for months and months and months, just waiting for something else to come by. They're not crawling, looking. It's this idea of this malevolent entity that doesn't even think it's malevolent. It's doing its thing, and if you happen to be unlucky enough, like Mr. Litvak was, to have this horrible, traumatic incident in the woods, then you'll awaken it. It's the same with Yakov. He's unfortunate enough to be the guy that comes into this house, and it was ready and waiting."

Other Worlds film festival presents a Virtual Orbiter special screening of The Vigil with cast and crew Q&A, Jan. 28-Feb 1. Preorder and screen at watch.otherworldsfilmfest.com. Only open to Texas residents.

The Vigil goes on general release Feb. 26. We’ll have a full review and a longer interview with Keith Thomas then.