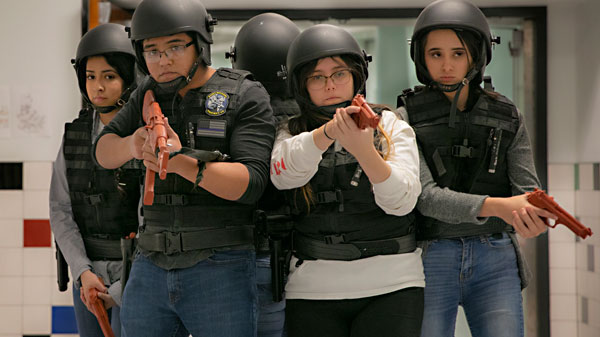 If you walked into a school and there were kids with fake guns running police-style room clearance operations, what would your first response be? For journalist and filmmaker Maisie Crow, it was very simple: "What? What's happening? ... I'd never seen a visual like that, these high schoolers holding guns in SWAT gear."

She'd been invited by a video production teacher in Laredo to talk to his class. When she saw those kids, she quickly realized that no one seemed surprised by their presence. It turned out it was the Criminal Justice Club. At its simplest level, it's ROTC for cops, a high school club where kids are taught the basics of law enforcement, with an eye to joining the police or the United States Border Patrol when they graduate. Some are attracted by the idea of helping their community; others by the promise of a well-paying job after high school; and others by the idea of having somewhere to belong. Immediately, Crow was fascinated by the potential for a documentary: "I wasn't aware that these programs existed. [And] if I don't know about it, who else doesn't know about it?"

This wasn't a one-off but a program run on many campuses around Texas. She managed to get permission to film the CJC at Horizon High School in El Paso's Clint ISD, which she saw as a way to explore the shades of gray in the border and immigration debate. She noted that El Paso is traditionally a very pro-law enforcement community, but she was filming just after the Texas Legislature had passed Senate Bill 4, the state's notorious and controversial "papers, please" bill. She said, "I wanted to know what that meant for kids who were interested in law enforcement careers, particularly kids who have immigrant parents who are very familiar with the story of living on the border."

The footage she filmed has become At the Ready, her new documentary selected for Sundance Film Festival's main programming and as part of the satellite screenings series of drive-in events organized by Austin Film Society. She was right about her belief that people would be surprised that these clubs even exist: When Crow met producer Hillary Pierce at an AFS workshop during production, Pierce said she was completely unaware of "these programs in schools that are fast-tracking teenagers into Border Patrol. ... [Crow] showed me some early footage and I was just stunned, the way I imagine people will be when they see the film."

Yet Pierce also realizes that she'd been through a similar experience when she took a hunter safety class in eighth grade. She said, "It's crazy that they're learning how to handle a gun before they're learning to raise their credit. That's the order of things: Learn how to use a gun, and sort out everything else later."

The fact that the Criminal Justice Club is not seen as extraordinary, and is in fact lauded by many, is part of what fascinated Crow. It also allowed her to get access to the program, as well as to the families of the students taking part in it. Most importantly, it allowed her to become a confidant to many of the kids, who were prepared to tell her things they would not discuss with their parents or teachers, all as they are trying to find out who they are as they get closer to adulthood. She explained, "That's where you're able to start looking at the complexities of growing up in a program like this, in a border community."

At the Ready streams at Sundance Film Festival 2021, Sun., Jan. 31, 11am: second screening available from 6am on Mon., Feb. 1. Tickets and info at festival.sundance.org.

Producer Hillary Pierce will be part of the Sundance/AFS Texas Women Producers panel (Sat., Jan. 30, 11am), while director Maisie Crow will participate in Shifting Perspectives About the Border (Mon., Feb. 1, 1pm). Sign up at www.austinfilm.org for streaming access.