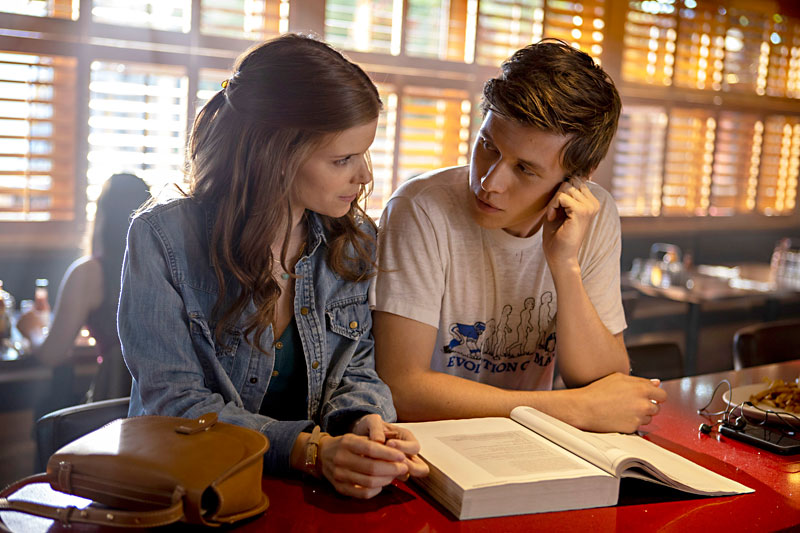 A teacher sleeps with a student. The headline always leads to prurient and salacious giggles, especially when it's a young woman teacher. But in A Teacher, the new FX/Hulu series adapting Hannah Fidell's 2012 debut feature of the same name, there's no nudge-nudge, wink-wink. Instead, it's a story of the kind of grooming where the word never seems to be used.

Illegal student-teacher interactions are surprisingly common, especially in the show's setting of the Lone Star State. "Texas is a hotbed," said Fidell. Its only real competition? Florida, natch. "I had to bounce between my Google Alerts for press about where this happens with most frequency." Not only is it disturbingly common, but the number of cases in the news is on the rise – something Fidell ascribes to social media both enabling grooming and ensuring that it comes to light. "The increased access to the personal lives of students and teachers plays a major part, but teachers are being found out more than previously."

In 2013, Fidell's debut feature took a sober look at the inappropriate relationship between high school teacher Diana Watts (Lindsay Burdge) and one of her students, Eric Tull (Will Brittain). Now Fidell has reworked that basic story into a new 10-part series. The framework is similar: High school English teacher Claire (Kate Mara) seduces one of her students, Eric (Nick Robinson). However, transitioning from a 75-minute feature to five hours of television, especially after years of heated debate about consent and grooming, allowed Fidell to come at the show as essentially a new work. "Even though there are parallels between the film and the show, I had to separate them in my head."

For Fidell, the story comes down to a betrayal of trust by an adult in authority, but having the antagonist be a woman forced viewers to explore their preconceptions. "If it's a man, it's just so clearly wrong," she explained, but she described a double standard when it comes to women teachers. "You see on Buzzfeed or the clickbait websites, you see these '50 Hottest Teachers Who Sleep With Their Students.' I was just curious, looking at their mugshots, what drives seemingly normal-looking women who seemingly aren't predators in the terms we traditionally think of – meaning the guy in [a] van who hands out candy, convinces kids to get into the car and drive away. At what point did they break from reality enough to perpetrate these crimes and this abuse?"

As with the film, Fidell set the story in Austin (a former and, she confided, hopefully future Austinite, she said she always writes with the aim of shooting in Texas). Yet even though the series ended up primarily lensing in Alberta, Canada, she kept the Austin setting for more than just sentimental reasons. "The legal aspects worked to our advantage," she said. "In Texas, no matter what, she's his teacher and she's going to go to jail, even if the student is over the age of consent."

Tackling the story again after years of discussion about consent opened up the narrative for Fidell as a writer and director. When she made the film, she said, "People weren't ready to talk about this stuff with the same sort of openness that the show allowed us to." Moreover, it gave her space to get into Claire's mindset and explore her motivation. "How can someone who can perpetrate this abuse of power, this abuse of trust, help herself in order to get through the day without thinking they're some evil person or inherently bad?"

Austin Chronicle: For a filmmaker to adapt a film into a TV show – beyond the paycheck – there must be an itch that you still felt the need to scratch.

Hannah Fidell: The film came about because of a variety of reasons. Looking back at the press we did when it came out, I wasn't in a place where I could openly talk about my intent in making it, which I can do now. For me, I made the film as a way to understand the experience that I had, which was a sexual assault by a friend of mine, someone that I trusted and considered to be a close friend. This was a different sort of abuse of power because it wasn't a teacher, it was a classmate of mine, which is quite different to the film.

The show gave me an opportunity, seven years later, to really explore the situation that I had found myself in from a different perspective that is even closer to what I experienced, because I really empathized with Eric's character deeply, on a personal level. Whereas in 2012, for me, it was about trying to understand what this guy was possibly telling himself in the moment, the show is allowing myself to show the long-term effects of this abuse that I experienced through this parallel story.

“The one thing that we noticed was the number of cases increasing [and]just how frequently it was because of text messages, and Instagram messages, and Snapchat that the relationships were being found out.”

AC: You mentioned how social media has played a role both in the number of cases and their detection, and you're able to use that in a way that you couldn't in the film, just because people weren't using social media that way in 2012.

HF: Yeah, it helped show the boundaries being crossed. There's no organization that's tracking the cases of teacher-student affairs, and it's hard to track for the reason that sexual assault is hard to track, which is a lot of victims don't come forward. [But] the one thing that we noticed was the number of cases increasing and, in the write-ups that I read as we were prepping the show, just how frequently it was because of text messages, and Instagram messages, and Snapchat that the relationships were being found out and being able to be prosecuted, because there was digital evidence.

AC: That's another part of the power dynamics – kids who may want to come forward feel they won't be believed. Like with the height difference between Claire and Nick, that he's a head taller than her. How would anyone believe she forced him to do anything?

HF: That's what helps again muddy the waters. Unlike Notes on a Scandal, where the boy in that movie was really young, we were interested in one of those 17-, 18-year-old guys – and we all went to school with them – that looks like they're 25. One of those guys that looks like they're older than they actually are, [and] the height difference helps make the visual pairing of the two of them much more complicated.

AC: You wrote the series and directed six of the episodes, but you brought Gillian Robespierre (Obvious Child) and Andrew Neel (Darkon, King Kelly) on to direct two episodes each. Why bring them on, and why bring them on for the particular episodes you brought them in for?

HF: They're both good friends, and that helps. Andrew, I've been a friend of since his film King Kelly came out at SXSW, and I reached out to him then and fangirled out. Then I saw his film Goat, and that really blew me away. My college experience, I hung out with a lot of guys who were in frats, and I felt like he captured that experience well. I brought him into the writers' room, and he was the only male writer in the room. I like to describe him as a sensitive bro, and I challenged him with the episodes that I gave him. He did sort of a repeat of Goat with episode 7, which I have to say, I think he really aced that one. Then we also gave him episode 5, which is where Eric and Claire rent a house in the Hill Country, and it required a lot of subtlety and nuance. I don't want to speak for him, but I think he was nervous about that because it was so different from anything he'd ever had to do, which made me even more excited to have him direct. I knew he would make it that much more interesting because it's not in his normal wheelhouse.

And Gillian, I've seen her work, I think we have very similar sensibilities, and I just trusted her to fulfill what the vision of the show was. She went above and beyond, and she did a fantastic job.

A Teacher premieres on FX via Hulu on Nov. 10.

If you are in need of help or suspect someone is being abused, you can reach out confidentially 24/7 to the National Sexual Assault Hotline at 800/656-4673 or chat online at online.rainn.org. Find more information at www.a-teacher-resources.com.