Horton Foote: The Road to Home Takes the Writer Back to His Roots 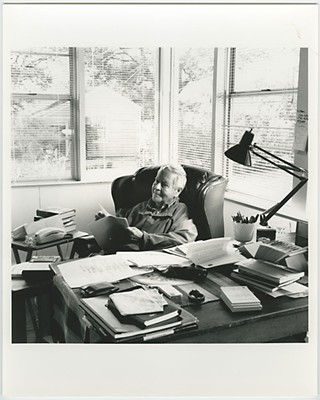 "When I first asked Horton [Foote] if I could start following him around with a camera? He didn't immediately say yes," director Anne Rapp confessed. "He said, 'Let me think about it.'" It wasn't a totally out-of-the-blue question. Rapp met the Pulitzer Prize-winning playwright and Oscar-winning screenwriter of To Kill a Mockingbird when she was script supervisor on his 1983 film Tender Mercies, and they'd become friends in the intervening years. But he took the matter for documenting his life seriously. "Two weeks later, he said to me – I was at dinner with him and he said, 'Okay, I've thought about your proposal and I'm gonna let you do this 'cause I trust you. But you have to promise me one thing.' And I said, 'What's that?' And he said, 'I don't want you to ever ask me on camera if there were real people in my town that my characters were based on.' And I said, 'Okay, fine.' So we didn't."

The town in question? Wharton, Texas: 60 miles southwest of Houston, with a population of under 9,000. It's where Foote grew up and the central location of Rapp's new documentary, Horton Foote: The Road to Home, which premieres at the Austin Film Festival later this month. The film covers a good deal of Foote's career but offers a particular focus on the last three years of his life, when he spent a good deal of time visiting his hometown. Although Foote left Wharton at the age of 16, he credited it as the inspiration for much of his writing and returned there regularly to work. "He was able [to] write just beautifully for 70 years and almost everything he wrote was based in a small town in Texas – a fictitious version of his hometown."

With the exception of his Orphans' Home Cycle of plays, which Foote explicitly noted as being based on his own family history, he skirted the question of who inspired what character in any piece of writing and Road to Home respects that boundary. But that doesn't mean that the documentary skimps on intimate details of Foote's life or inspiration – Rapp lets us sit on the porch with Foote as he reminisces, as well as takes us on outings around Wharton so the author can point out the alleyway where there used to be a brothel or where in the local cemetery different generations of his family is buried. There are some talking heads woven throughout – fellow playwright of note Edward Albee, actors like Robert Duvall and Matthew Broderick who starred in films written by Foote – but the largest presence besides Foote himself is that of his daughters and a series of relatively unknown Texas actors performing short monologues from various Foote plays directly to the camera. The effect is intimate and theatrical and betrays Rapp's deep respect for her friend's family and art.

"I did this mainly because I love Horton so much. I didn't say to myself, 'Oh, you know if I take that subject, then I can make a good documentary. Might get my first director credit.' Had nothing to do with that. I'm not sure I'll make another documentary – this one was so hard!" Rapp said, laughing. "I've been on it for over a decade. Anyone who watches the film will do the math and realize how long I've been on it! But I didn't do this for me. I did this for him. [I wanted] to show this man who had this incredible body of work, but was so understated, so not likely to ever toot his own horn, to beat his own chest or something like that – the world needs to know who he is."

Horton Foote: The Road to Home