Austin Filmmaker Chinwe Okorie Gets a Boost From Issa Rae 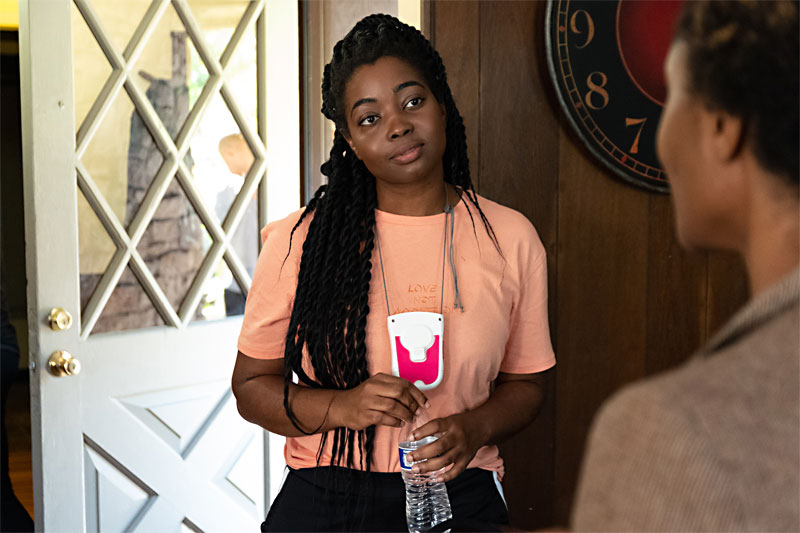 Chinwe Okorie on the set of her short film, "Lovebites" (Photo by Ursula Rogers)

When SXSW was canceled, Austin filmmaker Chinwe Okorie was left in limbo with her new short, "Lovebites." Now it's been given the Issa Rae seal of approval, and after only a week she's already seeing her career elevated.

The intimate drama about Cat (Khali McDuff-Sykes) and the final 24 hours of her collapsing relationship with her boyfriend, Chidi (Ukairo Ukairo), was supposed to screen during SXSW as part of the AFS Showcase. However, when the festival was scrapped for 2020 she saw filmmakers help each other create new platforms. "I was really astounded by how the film community came together and shared links."

Yet, knowing how easy it is for short films to get lost in the torrent of content, she was cautious about how to proceed, initially only putting the trailer for "Lovebites" online and sharing the link with people if they contacted her. "That got my name buzzing," she added. She also gave credit to her producer, Nava Mau, who was both a mentor and had been cast as a series regular in HBO's upcoming Generations. "Her name was in Deadline, so that helped me tremendously," Okorie said.

It was another local filmmaker, B.B. Araya, who suggested that she submit the short to Rae, who had already hosted Araya's Austin-made web series "We Are" on her YouTube channel, Issa Rae Presents. Okorie wrote a long email, explaining who she was and about the film, submitted the link, and on Sept. 13 "Lovebites" got its streaming premiere under the Insecure star's Sunday Shorts banner.

While having good advice and a helpful support system around her has undoubtedly helped, everything came back to the film and Okorie's faith in the project. At every stage, she'd leaned into her own decisions, including using a split-screen effect to show the divide between Cat's dreams of her relationship and the reality. "A lot of people read the script and didn't get the split-screen at all, and I just believed that it worked." While she took on a lot of advice and notes, she also knew when to stick to her vision. "There's a balance. I trust my instincts a lot."

Those decisions are what really led to her success, because Rae's team knew nothing about who she knew or who advised her: It turned out that they skipped over that long essay she sent. "They just clicked on the video, and then they read the email."

However, Okorie still gives praise to everyone that helped her: Mau, Araya, and now Rae for using her YouTube channel, "the place she started her career" to boost the careers of up-and-coming filmmakers. "I don't think there's someone with her profile who has done as much as she has."

Okorie is already seeing the benefits of that exposure. "The response is great," she said. "Issa's fans have said how relatable it is. ... Career-wise, I've had people reach out, and I have some general meetings set up." She's already working with Araya and other members of Austin's Black Film Geniuses collective on an anthology "to showcase the diverse stories we tell," while also planning her next film, Elephant, which she described as being "about mental health and identity in middle-school girls." She was originally planning a short version as a kind of proof-of-concept but, with the wind at her back, "Maybe I can skip the short film and go straight into a feature."

A version of this article appeared in print on September 25, 2020 with the headline: Austin Filmmaker Gets a Boost From Issa Rae