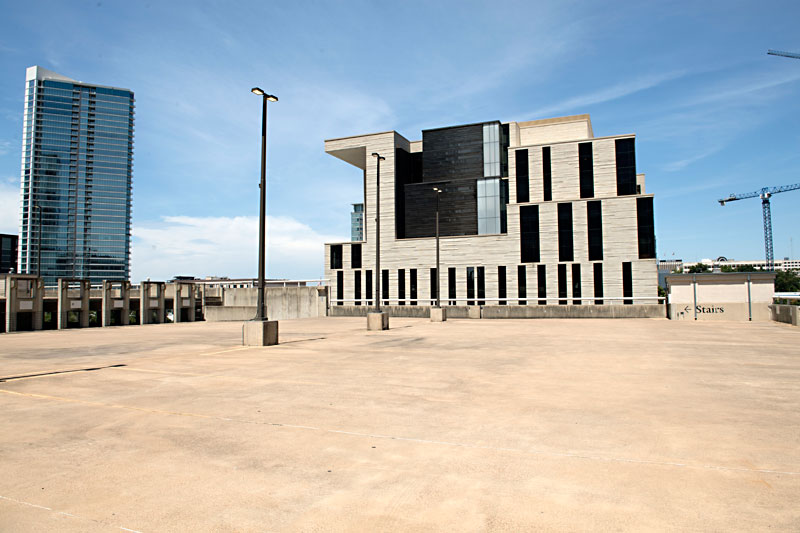 The State of Texas Garagetop desk, the newest location for the Blue Starlite Mini Urban Drive-In (Photo by John Anderson)

The drive-in is back (courtesy of the pandemic), and this week Austin is adding three additional outdoor screens. Two established theatres – Blue Starlite Mini Urban Drive-In and the Community Cinema – are opening extra drive-ins, and arcade wizards Pinballz are getting into the cinema business at their site in Buda.

Blue Starlite, which celebrates its 10th anniversary this year, already has two sites in the Austin area (plus one in Colorado) but their new site is in the heart of Downtown: the top deck of the State of Texas parking garage at Third and San Antonio Street will light up the skyline starting at dusk on Thursday, Aug. 27 with a screening of Hairspray: The Musical. Founder Josh Frank has tried to put a different emphasis on booking for each location: Round Rock has been more family-focused, Mueller has mixed repertory screenings with a selection of new indie titles and late night horror, but this site will bring more music into the mix – including a series of new performances by Austin Opera, specially recorded for this new screen.

The new site brings some sorely needed entertainment back to Downtown and was organized by Frank with the Downtown Austin Alliance Foundation. DAAF Executive Director Molly Alexander said. "At a time when we are all doing our part to keep our community protected, this offers an opportunity to get out of the house to enjoy a movie, live music or a theater production in a safe way."

Safety has also been the top priority for Community Cinema at the Community First! Village. The management closed down on the on-site outdoor amphitheatre that hosted weekly screenings back in March but now will recommence their programming, starting Fri., Aug. 28 with Spies in Disguise (based on the short cartoon "Pigeon: Impossible" by Austin-based animator Lucas Martel). However, rather than using their existing permanent cinema, they'll be lighting up a 36-foot inflated screen on a parking lot on phase two of the homeless facility, which is currently under development. This way, Community Cinema Director Ed Travis explained, the theatre customers will have no contact with the residents, many of whom are at increased risk due to health issues or age. "Drive-ins are thriving because it's the only place people can go and feel safe," he said.

Filling out the calendar, Pinballz launches Pinballz Moviez at The Kingdom in Buda on Sat., Aug. 29 with an outdoor screening of Dazed and Confused. The local arcade chain has been open during much of the pandemic and will be offering carside food and drink service from its restaurant. Founder Darren Spohn said he's wanted to open a drive-in at the location for years and sees audiences craving the experience again as self-quarantine fatigue sets. "It's a piece of culture that we lost for a while. They were a social environment, just like arcades."