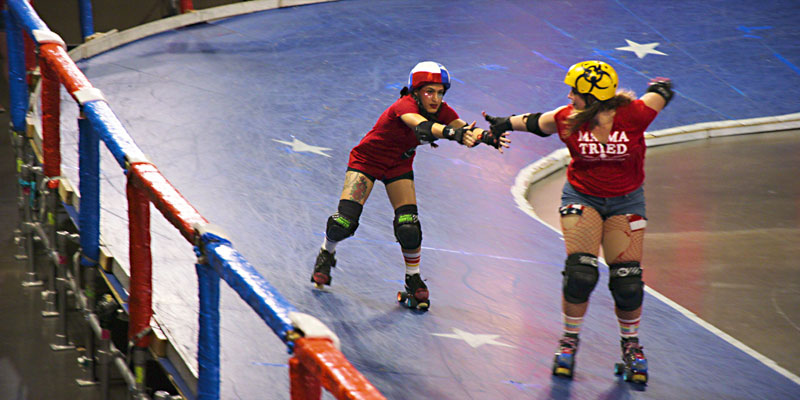 Roller Derby. The sport revived, re-created, and unleashed out of Austin in 2001, only to become a global phenomenon. Evolving from endurance rink races in the 1930s to its modern incarnation as a high-speed contact sport run and played primarily by women, it's still struggled to gain mainstream media attention, or to be presented as a sport rather than a novelty. That's why documentarian Austin Reza wanted to include Austin's TXRD banked track league in his new show for Netflix, Home Game.

The series was created by producer and former The Vice Guide to Everything correspondent Ryan Duffy, and he and executive producer and episode director Reza shot a pilot several years ago. "It definitely had a different vibe," Reza said, "but it didn't change that much." The idea was simple, he explained: "To find unique sports, and highlight the culture and the athletes that thrive in them."

It became a yearlong global expedition to find some of the most distinctive and extraordinary competitive contests in the world. Reza traveled from Bali, where farmers compete in Makepung Lampit (imagine drag racing but with water buffalo); to Italy for the no-holds-barred street rugby known as Calcio Storico; to Kyrgyzstan where riders play Kok Boru, an ancient variant of polo with a goat carcass instead of a ball; and even to the depths of the Pacific, following freedivers who risk their lives to set new depth records without oxygen tanks. He'd actually planned to film all eight episodes of season 1, but he had to concentrate on the imminent birth of his first child. "It came down to availability and time," he said, but being raised in Texas, and as a former Austinite, he knew he wanted to direct the Roller Derby episode. However, even though Austin is the sport's birthplace (the modern rules were literally written here, and it's home to two of the most respected leagues, the banked track TXRD and the flat track Texas Rollergirls), it was a new phenomenon to Reza. "I'd never seen it before we started researching it," he said. "Once I got there and watched them and saw them skate, I knew we had a gem of an episode."

It all came down to those characteristics that he and Duffy were searching for in their subjects, and "TXRD checks all those boxes. It's a really unique sport that has a really unique league, in a fun and exciting location, which is Austin."

However, the purpose of the series was always to remember that these are real sports – maybe not what mainstream audiences are used to seeing, but often widespread and wildly popular. So aside from treating the subject matter and the players with respect, Duffy and Reza always wanted to make sure that audiences weren't just getting titillated by smash-mouth violence, or distracted by the location. The sports, the competitions, had to be front and center, and that meant presenting them in a way that makes visual sense. For sports that don't have established rules for filming, or with which viewers aren't familiar, the show had to explain a lot more than if it was covering baseball or golf. "For example," Reza said, "Kok Boru is complicated to watch if you don't know the rules."

With Roller Derby, the first challenge is in explaining the difference between jammers (who can score points), pivots (who set strategy), and blockers (who both assist their own jammer and try to put the opposing team on their asses). That was easily solved with illustrations, but the bigger challenge was in capturing the action. At ground level, the sport can look like a car crash, but from above it's a different story, as skaters maneuver around each other and set up plays long before they happen. That's why Reza put a camera in the rafters of the Palmer Events Center, where the episode's key bout – the 2019 playoff matchup between the Cherry Bombs and the Rhinestone Cowgirls – was played. Sadly, he said, they ultimately didn't use much of that footage, because the sport was still too big to be caught by his camera. "I wish I would have [had] either had a little bit wider lens, or the Palmer Center be five foot shorter."

From the Track to the Screen: Roller Derby Movies and Shows

Kansas City Bomber (1972) Hollywood caught up with old-school Roller Derby just as it was going out of fashion. Raquel Welch went undercover for several months to research and train for the part of a skater from the Midwest who becomes everyone's favorite skater to hate. Shot in Portland, Ore., but filled with many players from the Los Angeles Thunderbirds, it's remained a cult favorite among skaters. Available on DVD, and streaming on Amazon Prime, Google Play, iTunes, Vudu, and YouTube.

Hell on Wheels (2007) The definitive documentary about the birth of modern Roller Derby. Documentarian Bob Ray had the pure blind luck to be at the second ever meeting of what would become Texas Roller Derby, and followed the women through the painful growth, ugly split, and eventual development of Austin's two leagues: the banked track TXRD and the flat track Texas Rollergirls. Available on DVD, Amazon Prime, and Vudu.

Rollergirls (2006) Flat track Roller Derby may be the bigger sport in terms of players and leagues, but banked track has proved to be more appealing to the camera, as shown when A&E moved into Austin Studios with TXRD and followed them through the 2005 season. The entire 13-episode run of this reality show is available on DVD.

Whip it! (2009) Director Drew Barrymore desperately wanted to shoot her Austin-loving adaptation of former L.A. Derby Doll Shauna Cross' semiautobiographical 2007 novel Derby Girl where it was set, but the merciless studio accountants made her move production up to Michigan for the more generous tax incentives. Still, she managed to keep it set in the home of Roller Derby and managed to sneak star Ellen Page (skating as Babe Ruthless) back into town for a few days of B-roll to at least give a touch of the ATX. Available on Blu-ray and DVD, and streaming on Amazon Prime and Starz.

Join Chronicle Screens Editor Richard Whittaker for a livetweet of Hell on Wheels at 8pm on Tuesday, July 14. Follow the hashtag #NowStreamingInAustin. 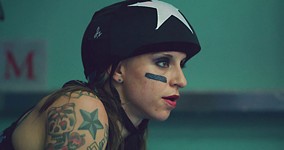