“Grab what you need from the trailer, we don’t know when we’re coming back” 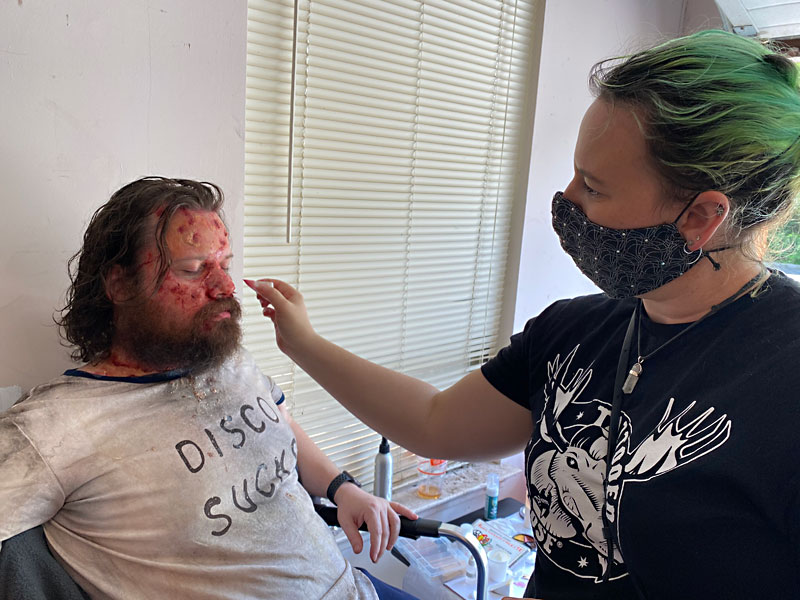 Meredith Johns on the set of Dawn of the Dude: Dorito Rising (Photo by Fairy Godmother Ninja Productions)

Credits include: Machete, Grindhouse, El Rey's From Dusk Till Dawn: The Series

On March 12, Meredith Johns – the Emmy-nominated founder of practical FX house Hawgfly – was in Wimberley to work on Amazon's upcoming new series, Panic. It was going to be a big crowd scene, with a whopping 300 extras. Filming never happened (the actors didn't feel comfortable due to coronavirus fears) but Johns was told to show up on set in Austin the next day for a smaller hospital scene. "I got into the makeup trailer and set up to get people ready," Johns said. "Then they called the day again, and said, 'Grab what you need from the trailer, we don't know when we're coming back.'"

The other big show Johns' studio was working on, Fear the Walking Dead, shut down that same day and every project Johns was working on – 10 in total – followed. At first, she was thrilled (no more 14-hour workdays) and she now had free time to prep for her summer events: genre convention Monsterpalooza in Los Angeles and the World Bodypainting Festival in Austria. "Then we couldn't work in our studio for about a month because we were a nonessential business," Johns said. She managed to take three carloads of supplies home from the studio to prep for both events – and then they were canceled. "Everything you kind of had been prepping for and hoping for was gone," she said.

With no film productions, Hawgfly had to pay studio rent in another way: selling masks and little 3D-printed tools (Johns called them Doorasaurus because they look like a T. rex) for opening doors and pushing buttons. She said, "[We're] just kind of figuring out the new normal, and figuring out things we can make and sell to kind of float us until things start up again."

Johns was able to get back into her studio space in June, just as some small projects have started filming. She first went back to set for Dawn of the Dude: Dorito Rising, a zombie-themed series. "They had questionnaires, took our temperature, we set up in the garage where we had nice air flow," she said. Additionally, the actors wore masks as much as possible and were separated from everyone when they weren't wearing one.

Johns also worked on a commercial for a popular cracker brand. "There were probably about 20 people on the set, and they had a much stricter protocol," Johns said. "[There was a] huge stage, and they had [different] wristbands for access to certain parts of the stage." They also had questionnaires, liability waivers, a medic that checked people's temperature, and boxed lunches. But most notable was the "sanitation team that came through every 30 minutes to an hour and sprayed down everything," Johns said.

"I honestly felt safer on that set than I think I feel at H-E-B," she added. "It was very controlled and we were very well taken care of – subsequent projects have all been kind of like that."

Yet these small projects are still nowhere near the usual workload Hawgfly would have at this time of year, and she fears work could cease again due to the rise of COVID-19 cases. Plus, there are still questions regarding the bigger TV and film productions, of how and when they will restart. "You're not going to have a crowd scene with 300 extras," she said. "You just can't. So how does that work?"