Lights, Camera, Safety: Film and TV Production Is Coming Back to Texas

Now producers and unions are making sure no one gets sick 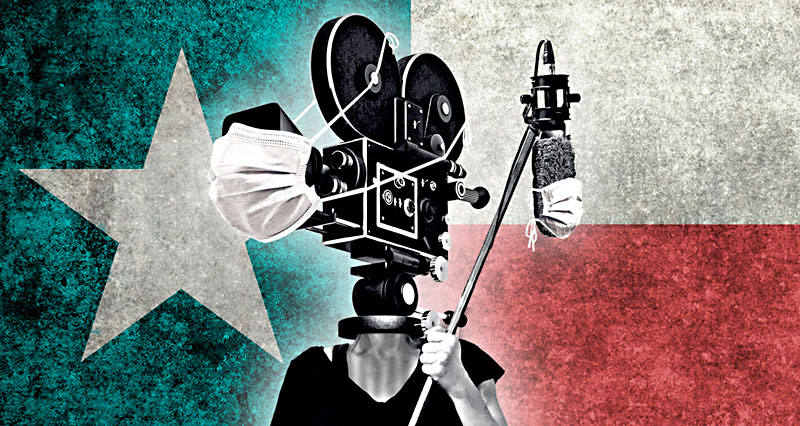 Businesses have found three possible responses to the coronavirus. Option one, ignore it (and the continuing exponential increase in cases shows the dangers there). Option two, get everyone to work from home for as long as possible. But what about industries that can't work from home, like films? That's where option three comes in: Make the workspace as safe as possible. That's what's happening in the Texas film, television, and commercial industries, as producers and unions are coming together to cautiously set the cameras rolling again. Texas Motion Picture Association Communications Director Mindy Raymond explained, "The first stage, we were in pre-production on reopening Texas. Now we're in the second stage, as we're in production, and people are working out what they need to move ahead."

She should know, because she was on one of the first productions when restrictions started to lift. She wasn't there in her TXMPA role: She was cast as the pharmacist in a CVS commercial, and it was the smallest shoot imaginable. She said, "It was myself, the director/cameraman, the producer, an intern, and the PA." Rather than shooting in a regular store, everything was filmed on a soundstage, and the background was composited in later. Everyone wore masks, everyone stood 10 feet apart. And that's what the new normal may look like.

If that sounds rough, the first stage was much rougher, and Texas was ill-prepared, even as the studios on the coast started to go into lockdown. Laura King, business manager for International Alliance of Theatrical Stage Employees (IATSE) Local 484 covering Texas and Oklahoma, said, "The first and second week of March, Texas had some kind of feeling that it wasn't going to reach this far, and then we went, 'Oh, this is going to affect us.'"

The axe dropped on March 12. Locally, that was when all the biggest productions – Fear the Walking Dead, and Amazon's upcoming Panic – went into forced hiatus and sent everyone home. For craftspeople, this couldn't have come at a worse time within the set production cycles of the industry. King said, "You work when there's work and you play when there's no work. People were just beginning to recoup the money they spend during the holidays."

That's why Austin Film Commission Director Brian Gannon spent much of the next month walking local professionals through applying for unemployment benefits. "At the same time," he said, "the big productions needed paperwork to show that production had shut down."

“The first question that came up is, how do we even begin to do this?” – IATSE Local 484 Business Manager Laura King

April was the dead time for most, but not all, productions. Raymond called it "a tale of two cities ... on one hand, you have the animation companies, graphic design, games. They are drinking from a fire hose and can barely keep up, and on the complete other end of the spectrum, the traditional productions – the films, the commercials – have ceased to exist."

That changed on April 27, when Gov. Greg Abbott issued the Phase One order reopening parts of the economy, including limited film, TV, and commercial production. Immediately, Gannon started fielding 20 or more phone calls a day. Texas, it seemed, was in a unique position. While other states were reopening, none had the same crew base or studio facilities that Texas offered. However, King said, "The first question that came up is, how do we even begin to do this?" Spinning up production safely is a major priority for everyone, but it's a matter that King takes particularly seriously because, aside from being a union officer, she's also a qualified set medic. Her first concern is that the last few months have seen radically changing demographics for infections, with growth in numbers for people aged 20-40 "and that's a big section of our industry."

There was little to no guidance from the state or the feds, so the various craft guilds sat down and worked out their own rules. That's why the gold standards for production – or at least as close as anyone can get at the moment – are the Safe Way Forward protocols. Released on June 12, they are the result of close consultation at the national level between IATSE, the Directors Guild of America (DGA), International Brotherhood of Teamsters (IBT), and the Basic Crafts, and Screen Actors Guild-American Federation of Television and Radio Artists (SAG-AFTRA), with in-depth medical consultancy. The plan is to create industry standards for all union shoots, covering every aspect of production (the greater hope is that non-union shoots will take these onboard). Meanwhile, on the advertising side, the Association of Independent Commercial Producers (AICP) issued its own COVID-19 Workplace Guidelines and Considerations on April 29 and had already updated the 14-page document four times by the beginning of June.

The 37-page Safe Way Forward document covers every moment and aspect of a production, from location scouting to the moment the last truck loads out. What it shows is that, for the foreseeable future, film sets will look radically different from the relaxed but frenetic environments most people would recognize. Buffet-style catering, gone. Digging in an ice chest for sodas, gone. Carpooling, gone. Video village, where the crew will gather around to watch footage while it's being filmed, gone. The whole set will be broken down into zones: Zone A, the most restricted, will be where the performance will take place, and because actors won't be wearing PPE it will be restricted to essential crew only. Zone B is basically everyone else, and contact with Zone A will be kept to a bare minimum. No one gets into either space from Zone C – the outside world – without being tested. And that's just scraping the surface.

Gannon referred to them as "step-by-step instructions for different facets of set life," designed to create industrywide standard operating procedures. "My talking point with a lot of productions, and even non-union projects, is that they want crew to be able to bounce between productions and go, 'Why was that last set so much less safe?'"

All of this costs money, and studios are scrambling to redesign projects and rewrite scripts to reduce risk and cover a swathe of new budget items (including the new post of Health Safety Supervisor), PPE, additional wash stations and bathrooms, and constant testing. That takes a lot of work even if your budget is in the tens or hundreds of millions – so much so that Solstice Studios has relocated their new film, Hypnotic, from Los Angeles to Robert Rodriguez's Troublemaker Studios to make the finances work. It's also proved easy for commercials, which are used to short, tight shoots. The unanswered question is what happens to the kind of indies that have defined Austin film. Gannon said, "It's much easier to insure a commercial that's going to shoot for three to five days than something that's going to shoot for 35 days."

Coming at the problem from her medical background, King is still concerned about what implementation of the guidelines means. Take temperature checks: They're borderline meaningless without having baseline readings for every cast and crew member. Even then, what if someone has an underlying medical condition that means they normally run hot or cold? How can the producers handle that information without risking a potential Health Insurance Portability and Accountability Act (HIPAA) violation? "Handwashing stations, having fresh water and fresh air, cleaning equipment, they're all going to be key," she said, "but it's a work in progress."

Yet Gannon remains optimistic that craftspeople and creatives will understand that the trade-off of implementing the guidelines in an effective way (and no longer having all-you-can-eat filet mignon at craft services) is getting to go home healthy and carrying a paycheck. "People will get used to it," he said. "We're an industry of problem solvers, [and] keeping everyone healthy is everyone's top priority."