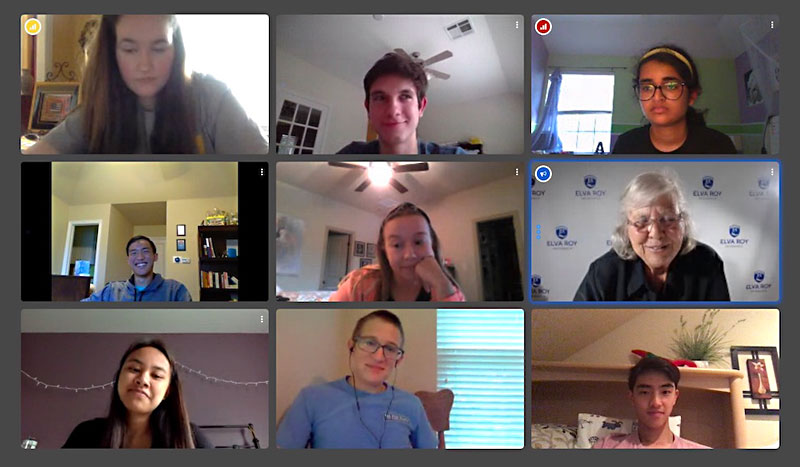 For Carol Marak, the best part is being remembered.

Marak, a Dallas senior, has no husband or children of her own. She advocates for seniors aging alone, or "elder orphans," as her 9,500-strong Facebook group is named. And as someone over 65, at high risk for COVID-19, she's been largely isolated during the pandemic.

Well, that is, except for 19-year-old Avery Gann. The two of them have never met in person, but on Saturday mornings they meet over video chat and talk – about their current lives, their past experiences, their religion, and their shared passion for writing. Marak gushes about Gann's personality and creativity on record and on her Facebook group, and Gann always checks in on her and sets up times to talk. The past month of calls has brought the two close: Marak sees Gann as a granddaughter, while Gann hopes the two can "stay in each other's lives for a long time."

The organization that brought Marak and Gann together is Big & Mini (www.bigandmini.org), founded two months ago by UT-Austin first-year Allen Zhou, an electrical & computer engineer. He felt lonely isolating at home with his family, and was gutted by news reports of nursing home residents isolated without family or friends. So he set up the nonprofit with brother Anthony Zhou and friend Aditi Merchant, using his coding skills to program a website to connect Bigs (seniors) with Minis (youths), hoping to help them form friendships.

The team's "biggest thing" was making the Big & Mini website as easy as possible to interact with, to increase accessibility to less tech-savvy participants. The Zhous used their own experience video-conferencing with their grandparents in China, as well as consulting with Karen Fingerman, a professor of human development and family sciences at UT Austin, to understand what potential pain points might be for older people. One adaptation: The meetings work over Jitsi, a video web-chatting service, which requires no download.

However, some awkwardness was unavoidable. The nonprofit is a rarity by definition – a technology organization aimed at older people. It has faced difficulties in getting the word out to the seniors who it hopes to connect with: 107 Bigs have signed up, compared to 174 Minis.

Zhou said he recruited Minis mostly through word of mouth and posts to college Facebook pages, but had more difficulty in advertising a video chatting program to seniors, so he's been reaching out to print newspapers and radio outlets. Michael Tee, who heads UT-Austin's B&M chapter, said that his pitch had been turned down by several Austin care homes, in part because of the online-only focus of the organization.

"I think that's just intrinsic to the nature of our platform," Zhou said. "It's just easier for us to outreach to the younger populations."

Marak, who has worked to correct anti-tech views in her own groups, said the idea of video-chatting induces "paranoia" for some older people, frequent targets of scamming. Elva Roy, a 74-year-old who leads a group for people over-50 in Arlington, knew it might be met with some pushback if she recommended it directly to her group, so she decided to sign up for it first herself, just as a tryout.

However, she found her conversations with 19-year-old Daniel Formella so "entertaining" that she didn't want to stop talking with him. It is clear, talking with Roy, that she has developed a sincere friendship with Formella — she mentions his indecision over a major, his favorite Peruvian food, his childhood passion for Roman coin collecting, his brother's "high-falutin'" job in New York. After conversations with him, she bought a book on Roman history and began taking Spanish on Duolingo. She says she is growing, and learning new perspectives.

"That's all because of Daniel."