Bill Lawrence on the serious side of his crazy hospital comedy 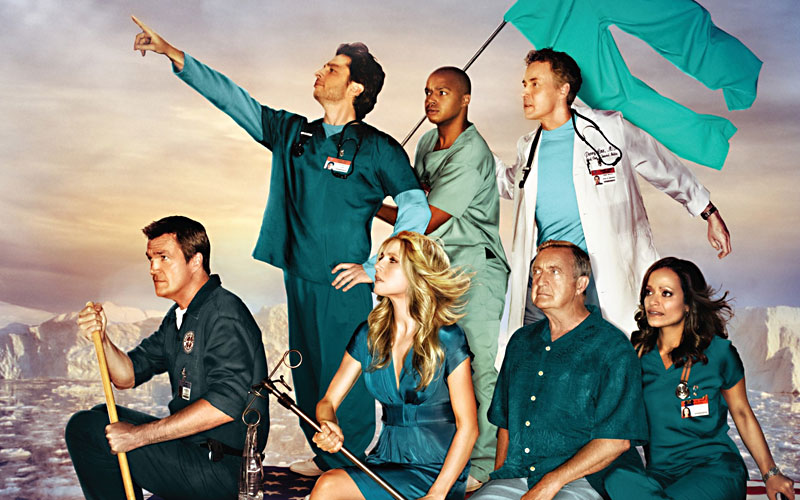 It's been a big month for Bill Lawrence and Scrubs, the medical comedy he created 20 years ago. His youngest son just finished watching it for the first time – a landmark, since all his kids were born while he was working on the show. At the same time, stars and best friends Zach Braff (who played nebbish medical intern John Michael "J.D." Dorian) and Donald Faison (his closest pal, trainee surgeon Christopher Turk) have launched a successful podcast, going through the show episode by episode. This weekend, all three – and other cast members – are part of a retrospective panel/cast reunion for the streaming version of the ATX Television Festival, with the in-person version already lined up for next year's fest.

But the most pervasive and unexpected return of the show has been the viral return of a one-minute clip. It's a moment from the season 5 episode "My Cabbage": An infection spreads like wildfire through the hospital, and it's shown by whatever touches the virus, whether it's a hand or face or surface, suddenly glowing green. It could have been filmed specifically for the coronavirus pandemic, but Lawrence blanches at any suggestion of prescience. He said, "My wife tells me I'm really bad at taking compliments."

The showrunner already had a legitimate smash success – political comedy Spin City – under his belt when he first pitched Scrubs. Superficially, it was another wacky take on life in an unconventional working environment, but for Lawrence that was the only similarity. "Spin City was a classic American sitcom," he said. "One of the things I talked about on Scrubs was, 'Man, I'm trying to do something different, and I fully expected the show to run one season.'"

Only in production would it show itself to be so much more poignant, morbid, tragic, heartfelt, and weird – all elements that could be the death knell for a show. He pointed to Freaks and Geeks: "It really captured the incredible pain and emotional anguish of that time and adolescence, but it did not live purely in the comedy world." Critically adored, held by writers as a classic, it didn't hit quickly enough with audiences and was canceled after one season. By contrast, Lawrence said, "Where we got lucky was that people received it better than we thought they would."

Take that viral transmission sequence. It's not just a teachable moment but a profound insight into the thinking behind Scrubs. The last person to contract the disease is an already sick patient. The next episode, she dies, and this wasn't some "very special episode" one-off piece of shock writing. Scrubs reflected the reality of hospital life: Patients die, and their deaths can seem arbitrary. Lawrence recalled, "We're going to kill these three patients right away, and we're going to bring a movie star, Brendan Fraser, and we're going to give him leukemia immediately. The only decision we made was that we weren't going to kill him immediately, because that might be too much even for our networks."

The writer/producer blanches at the idea he was a trailblazer, pointing to a long tradition of comedies made stronger by moments of unapologetic drama. "There were M*A*S*H episodes that just gutted you. Or The Wonder Years. There's an episode where [Kevin's] friend Winnie's brother dies in Vietnam and they just lay that on you. I remember as a kid going, 'Wait, whoa, what's this about? Why aren't they almost kissing and being funny?'"

Scrubs could be wildly weird, littered with pratfalls and surrealist cutaway fantasy gags (Lawrence's favorite: Turk and Carla, played by Judy Reyes, accidentally raise a pumpkin instead of their baby). Yet for Lawrence, it wasn't that the silliness brought them space to be serious. As with Spin City and its glimpse inside the hustle and bustle of the New York Mayor's Office, "You have to believe that people that go into those businesses give a crap, and they're trying to be of service in some way. Then you can have them be ridiculous or behave inappropriately, and still be protected as characters."

Lawrence got that balance in part from the inspiration behind Scrubs, "my goofy friend" Jonathan Doris, and seeing him go through medical school. "He'd meet us at a bar or at a basketball game, and if he'd be 15 minutes late, sometimes he'd be shaken because he, at a very, very young age, was dealing with people dying and families falling apart on a day-to-day basis."

If Doris' name seems familiar, it's not just because he became a medical consultant on Scrubs but also was the real-life J.D. (Lawrence freely admits that naming characters is not his strong point, having called characters in Scrubs and Spin City after his longtime producing partner, Randall Winston). He's also back in the headlines as part of Los Angeles' COVID-19 command center, providing an organized response to the pandemic. Lawrence said, "He goes home on weekends, he changes clothes in the garage and showers in the tiny outside shower he has before he sees his kids, so he doesn't get them sick."

It's a reminder of how Scrubs was always an antidote to the typical disease-of-the-week medical drama. Lawrence said, "I used to laugh with [Doris] that all these doctor shows, people push open doors, and they look very serious, and they say 'Stat!' and you're an idiot, and I would both be terrified and happy if I woke up in hospital and you were standing over me going, 'Hey, man, you're going to be fine.'"