How the celebration of TV is leading the way in streaming fests as it becomes ATX TV ... From the Couch! 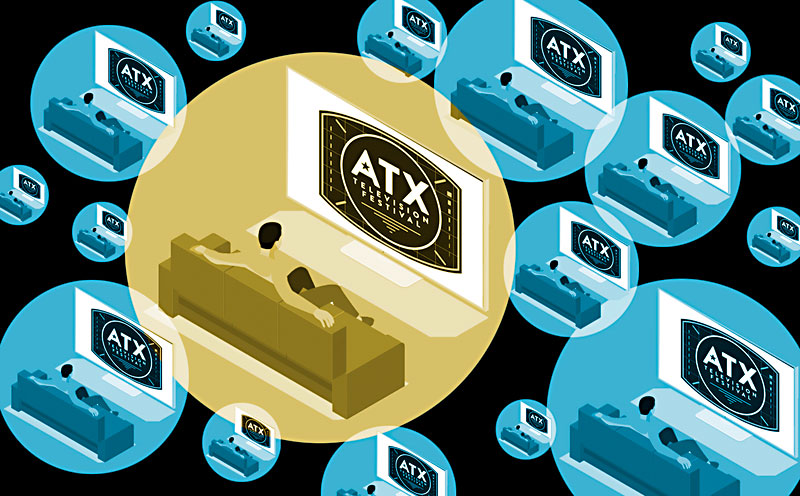 For eight years, the ATX Television Fest­iv­al has brought the small screen to the big screen, with theatrical presentations of TV favorites in a conference that brings industry and fans together. In the coronavirus pandemic, more movies than ever seek sanctuary by heading straight to streaming – and the TV-centric festival is following suit with a special free weekend of online shows and retrospectives that they're calling ATX TV ... From the Couch! Festival co-founder Caitlin McFarland explained, "What makes more sense than celebrating TV [in] the place that you watch it?"

So they looked back to the original 2012 fest, when the idea was “to do something, to bet on something, to take a swing.” In late March, they made their choice: McFarland recalled, “We looked each other in the eye and said, ‘We can’t happen physically, we have to go virtual.’”

Three months ago, the switch seemed beyond unlikely. McFarland and co-founder Emily Gipson were busy planning their ninth outing – as they call it, Season 9 – when the shocking cancellation of SXSW interrupted their scheduled programming. McFarland said, "We were on a conference call, and Emily had been on Slack and ha[d] seen it, and as the people were picking up for our phone call, she said, 'Turn off your computer. Don't look at it.'"

Their first response was sadness for the festival team and all the affected artists, and then the realization hit that they may have to deal with the issue themselves. They continued discussions with their media partners, kept booking, even took calls from creatives who had been scheduled for SXSW and were looking to ATX Television as a real option. However, as the dominoes fell, and other festivals like Tribeca Film Festival canceled, McFarland explained they saw three options: "Do we postpone, do we cancel, or do we go virtual?" Resched­ul­ing, date TBA, seemed like purgatory (plus, McFarland added, "Asking 250 panelists to get on planes in Los Angeles wasn't going to happen") while canceling "seemed like canceling 2020." So they looked back to the original 2012 fest, when the idea was "to do something, to bet on something, to take a swing." In late March, they made their choice: McFarland recalled, "We looked each other in the eye and said, 'We can't happen physically, we have to go virtual.'"

Every film and TV festival faces McFarland's trio of options – cancel, go online, or reschedule – and there's no guidebook or industry standard on what option to take. Gipson agreed that From the Couch is like Season 1 all over again, in that they're very much flying blind. "The very first year of ATX was like, 'I don't know what I'm doing. I've never thrown more than a birthday party, but this kind of makes sense. OK, who's excited about it?' And this is similar." At least this time, she added, "We know who we are as a brand. We are the past, future, and present of TV. We are celebrating the power of story. We are for both fan and industry. So what does that look like virtually?"

In many ways, ATX Television is at the end of the first wave of festivals trying to work out how to respond. If SXSW was the canary in the pandemic coal mine, last month Tennessee's Chattanooga Film Festival became the national bellwether for how to proceed, with their strategy of going online and dropping badge prices. Yet they weren't the first; Indie Meme Film Festival, the local celebration of cinema from South Asia, switched to streaming first, morphing from one four-day gathering in April to a two-weekend streaming event in May. Meanwhile, Austin Asian American Film Fest­ival has both rescheduled and gone virtual. Their feature films are tentatively rescheduled to November, but the fest will also run a week of streaming shorts on its original dates, June 11-17. Programming Director Jenny Nulf explained that they didn't want to abandon either their attendees or filmmakers, "[So] we're still here, on our weekend."

Rescheduling festivals isn't about just arbitrarily picking another date. The festival calendar is finely balanced and delicately negotiated, built around tentpole fests like Sundance, SXSW, Cannes, and Tribeca, with smaller events booking in between – or, in ATX's case, around the midsummer TV hiatus, when talent is between production and networks want to preview their fall lineup. AAAFF's November date is still dependent on AFS Cinema being open in time; if they go virtual, technology becomes an issue. SXSW curated a small number of titles on Amazon Prime; rather than trying to negotiate, Indie Meme went with a schedule of streaming links; Chattanooga used password-protected VOD, limited to specific web browsers with no casting capability, to reduce piracy. Tribeca and a host of international festivals are currently running a curated event via YouTube called We Are One, and Toronto's Fantasia Film Festival will go online in August, with all its titles geolocked so they are only available to Can­ad­ian audiences. Yet those kinds of platforms can be prohibitively expensive for a small festival, Nulf said, "And a lot of our filmmakers don't want their films online."

Most festivals are waiting to make a final decision until the situation is much clearer, although the clock is ticking. Bears Rebecca Fonte, founder and executive director of dedicated science fiction fest Other Worlds, said that they are waiting until September to make the final decision about whether the event will be in-person or virtual, but "we're intending on having some form of festival this year." The festival is scheduled for Dec. 5-8, "being at the end of the year is an advantage and a curse," Fonte said, "We get to look at what everyone else has done and learn from that, but there are so many unknowns between now and then." How­ever, even if they do go online, the fest is offering all of this year's selected titles the chance to play as part of Other World's 2021 theatrical lineup – because, as Fonte noted, festivals are as much about filmmakers getting to see their movies with an audience as they are about where they're projected.

From The Theatre to The Couch ... And Back Again

Even though it's a pure TV festival, ATX has had the same complex discussions about tech and scheduling. Because they'll be using their YouTube channel for streaming, screenings of full episodes and premieres were pretty much off the table, so extra emphasis has gone into panels and previews. At the same time, the organizers weren't interested in just presenting a Zoom room of talking heads, so they're trying to make events as fun as possible. The planned preview of season 3 of HBO's dry comedy Search Party becomes a cast table read of the season 2 finale, while the Cougar Town retrospective is now a happy hour with stars Busy Philipps and Christa Miller. Gipson explained, "Share a glass of wine with these two people who drink wine constantly on the show – that felt like a good shift."

Yet even while organizing this year's virtual event, Gipson and McFarland are already looking ahead to next year. Several of what would have been Season 9's big bookings – reunions for Scrubs, Parenthood, and Justified, plus a screening of the "lost" pilot for CBS's adaptation of James Ellroy's L.A. Confidential – have simply slid back a year, and this year's badges are being honored for either 2021 or 2022. Gipson said, "Season 10 is going to be bigger and better, and everyone is going to come together in a huge celebration."

ATX TV ... From the Couch! runs online June 5-7. Register for free at www.atxfestival.com.

A version of this article appeared in print on June 5, 2020 with the headline: Small Screen, Big Screen, Small Screen Again