With movie production in lockdown, try the sounds of Paper Street 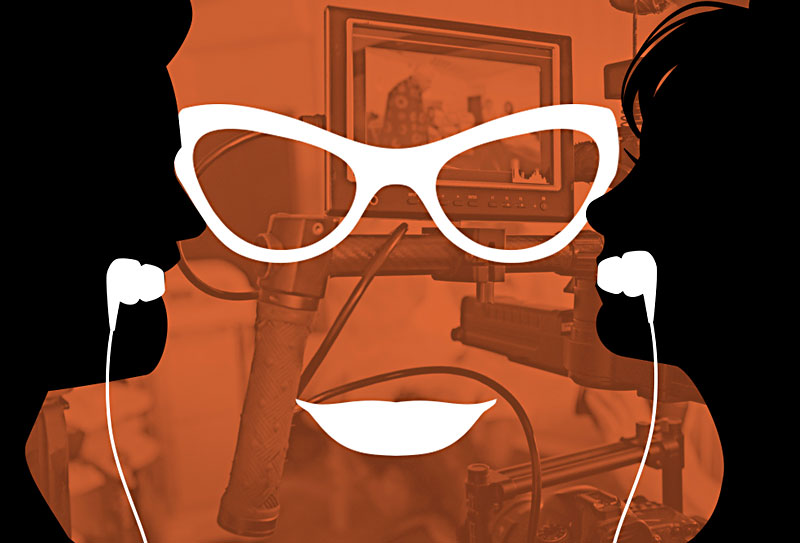 If the podcast boom has proved one thing, it's that people love talking about film. But it often seems that, while there's a banquet of reviews and news shows, there's very little for new and aspiring filmmakers. That's where the Paper Street Podcast, the new biweekly audio series from Austin-based film studio Paper Street Pictures, is different. "This is a podcast for indie filmmakers by indie filmmakers," explained host and filmmaker Becky Sayers.

"There definitely are more than enough film podcasts out there," added Sayers' co-host, Paper Street producing partner Shawn Talley, "but we've found that the business and production side of film is an aspect that isn't discussed enough."

Launching the show in March also wasn't just a response to being stuck home during the COVID-19 pandemic but part of the growth for the Austin-based production company. Paper Street Pictures just had its latest feature, horror-comedy anthology Scare Package, acquired by genre streaming experts Shudder, while the team is just wrapping post-production on their most ambitious project yet, supernatural Western The Pale Door. They'd already been exploring ways to expand the brand to promote their own work and that of their indie/genre filmmaking peers. Since Talley had already done some podcasting it seemed like the ideal format, "and Becky was the first person we thought of as a potential co-host due to the fact that she's a fellow independent filmmaker and has an incredible knowledge of genre films, especially horror."

The first episode was supposed to launch the week before SXSW, "but a scheduling conflict pushed us back a week," said Talley. They even planned to have Paper Street co-founder and The Pale Door Director Aaron B. Koontz as an early guest, to give a festival recap – which, of course, never happened. Fortunately, the podcast could still go ahead, with Sayers broadcasting from her home in Seattle, and Talley as Paper Street's L.A. rep.

But while the hosts are on the West Coast, Paper Street is an Austin studio, and that's a constant factor in the show's development. "The connections we've made in Austin have certainly helped us in every facet as a company," said Talley, "and the podcast is no different." That's why one of the earliest guests was Austin filmmaker Emily Hagins, who also directed the opening segment of Scare Package. Talley added, "We're making a concerted effort to pay it forward by also promoting a local filmmaker's work on every episode."

Yet this isn't just a Paper Street newsletter. One big myth of cinema right now is that there's nothing happening. Ask any film journalist and it's been a constant deluge of surprise high-profile VOD releases, the birth of virtual cinema and online film festivals, and evolving questions about what film production looks like on the other side of this. For example, Talley said, "A big industry headline we've been able to discuss is Amazon putting a version of SXSW 2020 on their streaming service, including the pros and cons of filmmakers opting into it."

That's especially important because the podcast isn't aimed at Hollywood executives, but the more diverse lower branches and roots of the industry, as well as non-professional listeners looking for movie recommendations (guests so far have included Z writer-director Brandon Christensen and Powerbomb co-writer and co-director BJ Colangelo, and Florida Film Festival Programming Director Tim Anderson). Over time, the idea is to go deeper, with single-topic episodes on particular aspects of production, from casting to distribution, "without being exclusionary," said Talley.

The hosts want the show to remain fun and accessible, with movie recommendations (including regular recommendations on obscure slasher flicks – one of Sayers' unmatched areas of expertise). But when it comes to making sure that new listeners don't get lost in the weeds of insider talk, Sayers said not to worry. "If we start using dumb industry jargon without explaining what it means, you can sacrifice us to a cult."

Projecting in Your Ear: The Best of Austin's Movie Podcasts

Certified Forgotten Chronicle critic Matt Monagle, /Film's Matt Donato, and a roving coterie of guests tackle the darkest corner of horror movies, with only one rule: The movie must have fewer than five reviews on Rotten Tomatoes. www.certifiedforgotten.podbean.com.

Double Toasted "Best of Austin"-nominated critics Martin Thomas and Korey Coleman are Austin's Siskel and Ebert. After 20 years as the go-to TV and now streaming critics, there are few better in the business. www.doubletoasted.com.

Lights Camera Austin Miss an episode of Robert Sims' always-enlightening and informed movie show on KOOP? Catch all his reviews and interviews online, dating back to 2014. www.lightscameraaustin.net

The Magic Lantern Ericca Long and Cole Roulain reappraise classics and put a new light on movies that should be in your own personal canon, with a globetrotting love of cinema in all forms. www.magiclanternpodcast.com.

On Story Austin Film Festival's deep-dive companion to the long-running PBS series of the same name pulls back the curtain on the writing process, with an archive of over 100 interviews. Their latest initiative, AFF at Home, is intended to spur writers to keep creating during the pandemic. www.onstory.tv/podcast.

One of Us Not just one podcast, but a whole family of shows. On the film side, Highly Suspect Reviews covers mainstream releases, while the Streamer Squad takes on new VOD and streamer service releases. Plus, every weekend founder Chris Cox hosts his Live From the End of the World streaming extravaganza of guests and fun. www.oneofus.net.