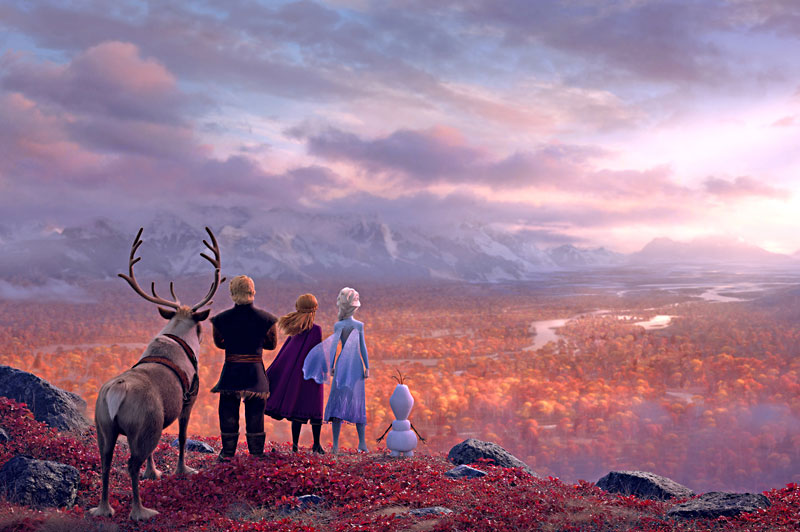 Creating new realms beyond Arendelle for Frozen II required both artistry and technology, and Texans Jay Jackson and Brandon Jarratt provided both.

Every time you see a snowflake in Frozen II, someone made it. Sometimes they are drawn by animators, but no one can illustrate every flake in a drift. So most are built by software, and there is just as much artistry in the computer tools as there is in the cartoonist's pen. Increasingly, the programmer and the illustrator are one and the same.

“I was so fascinated, because I loved art and I loved film but I never actually thought it was possible to work in that realm.”

Jay Jackson is someone who straddles both worlds. As an environment look supervisor at Disney Animation, he's part of the asset department. "We build the characters and environments that get reused throughout the film," he explained. He'd already worked in the world of Elsa and Anna as a look development artist on the 2017 short "Olaf's Frozen Adventure," and for this return to Arendelle he was part of the team that created the environments and elements within a shot – the leaves, the trees, the spray from the sea. With Frozen II, one of the first big challenges for that group was to create the enchanted forest – a massive new environment that had to feel like part of the same world, but also add something new and distinctive. "We'd try to push stuff, taking aspen trees and really, really stylize the texture, but then we had to pull back and make them a little more realistic just to fit in that same world." Once the directors and producers were satisfied, "It was up to us to package that up and make it really easy to apply that similar palette and feeling."

Asset creation isn't the kind of work where you can point at a single character or shot and say Jackson did it, but instead his creativity is part of the world. "I feel really lucky to have worked on a good portion of it."

Cartoons have always been a technical endeavor. Remember the moment in Snow White and the Seven Dwarfs, when the camera tracks through the illustrated forest like it was on a rail? It wouldn't have been possible if it hadn't been for Disney Technical Director William Garity's multiplane camera, a vast contraption that created layers and depth. Now the machinery is virtual and the images are digital, but for Jackson's fellow Texan and Frozen II Technical Director Brandon Jarratt the mindset is the same. "Being able to look at a problem, break it down into pieces and figure out how to address each piece and connect them together in order to solve the larger problem, that's what computer science is all about."

Jackson didn't exactly take the most traditional route to animation. A classroom doodler, he ended up studying human biology at UT-Austin. Even though he showed an interest in cinema (interning at Austin Film Festival in his senior year), his career track was medicine. However, there was a slight kink in his plan: He didn't like being in hospitals. From there he took an even more bizarre diversion, spending eight months as a market researcher for a nanotechnology energy company in China. If that seemed to be taking him ever further away from his doodling days, it turned out to simply be a circuitous route when he ran into an old friend from summer camp who was working at DreamWorks Animation. "I was so fascinated, because I loved art and I loved film, but I never actually thought it was possible to work in that realm."

Before that conversation, Jackson had seen working in animation as "some dream job that other people could have, but talking to him it actually seemed possible." Now that friend recommended that he apply to the same school he had – Texas A&M, to take the Master of Fine Arts in visualization. So back to Texas Jackson came, taking a job as a plant genomics lab manager in College Station, assembling an art portfolio and a show reel for his college application. After being admitted and graduating with an MFA, he said, "I got an internship at Disney, and then an apprenticeship and now a full-time artist." Elsa, the protagonist of Frozen II. Technical director Brandon Jarratt described her scenes in Ahtohallan's ice cave of memories as some of his favorite as a technical and storytelling challenge.

It was a similar roundabout story for Jarratt. As a kid growing up in Belton, Texas, his world changed when he saw the first Toy Story. "I loved animation and I loved computers, and this was those two things melded together in a perfect fusion." However, when he started thinking seriously about schools, he found out that there weren't many relevant degree programs, and the best one he could find was that A&M visualization MFA. Having studied computer science as an undergrad (he admits that it was his fallback, just in case he didn't get into the grad program), the appeal was that it was not built solely to produce filmmakers, but to immerse students from wide disciplines, from molecular modeling to game design, in the available tools: For example, architects use Esri CityEngine to build virtual concept models, but Jarratt and his team used it to lay out the wild and varied environment of Zootopia for the 2016 Disney film of the same name.

Moreover, it provided him with an in-road at Disney. Every year the department offers a summer industry course, in which animators work with a studio to make a 30-second short. "The year that I took that course happened to be the year that we were partnered with Disney Animation." That opportunity led to an internship, which led to him being hired by the House of Mouse. Seven years and counting as a technical director, with credits on Big Hero 6, Moana, Ralph Breaks the Internet, and another Frozen project, the 2015 short "Frozen Fever," and he sees the coding and project management skills he picked up in both the computer science and visualization courses as vital to his career trajectory. "Helping maintain and build tools for artists, looking at structures to make sure that all our data and all the performances our artists create, all our assets and the beautiful work that Jay does, gets out onto the screen the way that it's intended to be seen."

That's the real secret of animation: Storytellers have an impossible idea, and technicians make it possible. When it works, that's magic, and for Jarratt that idea is crystallized in one of the most important scenes in Frozen II: when Elsa finds Ahtohallan's ice cave of memories. "Nailing the look of that, and understanding what we would have to do in order to achieve that, was really hard. We didn't really know at first if we had the tools to do that." However, he only had to look as far as his last big project, Ralph Breaks the Internet. "The screen graphics pipeline that we built for that ended up working really well in creating these facets of the ice dome as screens that we could project these memories on. ... That was something I could point at and say, 'Hey, that's this cool problem I helped figure out.' Plus it was such an emotionally impactful moment in the film that, for me, it's something that I'm very proud of."

Frozen II is on Digital now and arrives on Blu-ray and 4K UHD on Feb. 25.