When Yasujiro Ozu's Tokyo Story was released in 1953, the film didn't immediately gain worldwide traction as international distributors found the film to be "too Japanese." Decades later, Ozu's stunning work is featured in countless film history lists and has even been voted as the best film of all time via a Sight & Sound poll of directors. Another film that graces these very same polls and lists is Edward Yang's Yi Yi (2000). Both films that patiently display the smaller, day-to-day trials of family life are featured this week in AFS Cinema's "Home for the Holidays" series, proving the timeless quality and universality of these unique family dramas.

With Tokyo Story, Ozu explored the delicate moments between family members. He filled his film with the duller interactions of everyday life, from packing for a family trip to discussing what the plans are for that day. He follows two elderly parents visiting their older offspring in Tokyo, where the children, now with families and careers of their own, don't feel obligated to entertain their parents. Each scene is filmed from Ozu's signature low angle, perfectly composing the shot with exquisite line work that directs your eyes to the characters' precise movements.

Yang (who was so influenced by Ozu he re-created his own version of Tokyo Story in 1985 with Taipei Story) also utilized single takes with intricate compositions within the frame to display quiet family moments in Yi Yi. He shot a lot of scenes outside of the designated intimate space of the home, using the city's architecture to frame many of his shots. Like Ozu, Yang was observant when it comes to daily life and found the beauty in patient storytelling. Families can be distant – strangers living in one space orbiting around each other as they go through the everyday motions.

"Perhaps we expect too much of our children," grandfather Shukishi Hirayama (Chishu Ryu) states in Tokyo Story. Perhaps that can be said for all family members. In Tokyo Story, older children are constantly trying to push their parents onto another sibling and fathers go to work instead of taking their children to the mall; in Yi Yi, parents disappear and some even commit adultery. Family isn't warm, but rather there are flaws that are treated as normal. Inevitably, acceptance of these flaws is crucial. Both films also end in death, bringing the family together once more to mourn as a unit, and each depicts the process not as tragic but rather as accepted traditions you're required to partake in as a unit.

Being "Home for the Holidays" isn't always arguments and tearful reunions composed of powerful moments that represent the strength of familial relationships. Sometimes it's benign, and sometimes you can feel unwanted by your own family. The youngest daughter in Tokyo Story, Kyoko (Kyoko Kagawa), understands this. "Isn't life disappointing?" she rhetorically asks her sister-in-law Noriko (Setsuko Hara), and she replies, "Yes, it is." What both Tokyo Story and Yi Yi have in common is that Ozu and Yang saw these very moments we usually brush away, and recognized that family is defined by them. 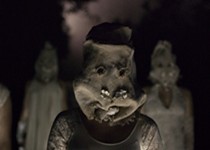 SXSW Selection The Toll Keeps Rolling
As special screenings are added, we talk to the filmmakers