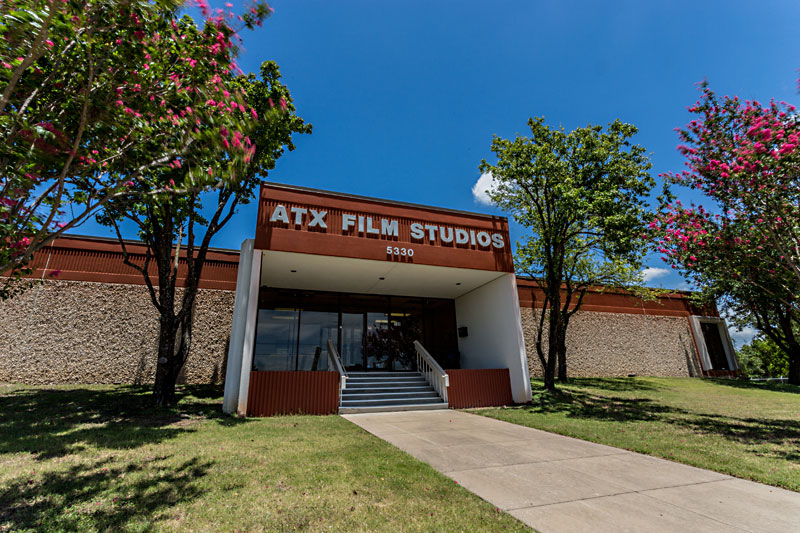 Where the magic happens: ATX Studios, the Austin home to Fear the Walking Dead, Revolution, The Leftovers, and more. (Photo by Arts + Labor)

There's a paint outline on the floor of Stage 3 at ATX Studios. If you're an eagle-eyed fan of Robert Rodriguez's Alita: Battle Angel, you'll recognize it as a Murderball track. A few hundred feet away used to be the well in which Kevin drowned Patti in The Leftovers. And when Althea's not out mowing down walkers in Fear the Walking Dead, this is where she parks her gun-laden, armor-plated MRAP. That's just a few of many memorable scenes from TV and film shot in the South Austin studio, and the most low-key of the city's big filming facilities is about to undergo a massive expansion.

ATX Studios may not have the institutional acclaim of the Austin Film Society-run Austin Studios or the instant name recognition of the world-famous Troublemaker Studios. But the facility, down winding service roads in a South Austin industrial estate, has been pivotal in Austin's growth over the last eight years as a destination for TV production.

Not bad for a former food warehouse.

Studios have a long history of adapting unconventional spaces (Austin Studios used to be airport hangars) but then, similarly, ATX Studios principal Stephen C. Bieneman isn't your average studio executive. A capital investor by trade (he made his reputation and fortune leasing commercial jets), in the 1990s he acquired a portfolio of real estate including a 250,000-square-foot warehouse in Austin. He sold most of the properties, but the Austin building had a 14-year lease with U.S. Foodservice that covered all the debt. He recalled, "So we went, 'How complicated is this?' and we kept it."

Fourteen years came, 14 years went. USF moved out, other commercial tenants moved in. Then, in 2010, Bieneman's agent called him with an intriguing offer. "He said, 'This is really odd. ABC-Disney just called me and would like to lease half your building and your office for a one-hour, one-year TV show." One condition: ABC wanted all the storage racks pulled out. "I said, 'I don't know, what's the rent?' He said, 'The rent is X,' and I told him, 'The racks will be gone by noon tomorrow.'"

That show was Noah Hawley's My Generation, which became Bieneman's introduction to the unpredictable world of running a studio. The series had eight episodes in the can, the network broadcast three – and then it was canceled. That was Christmas 2010, but just because the show was over, that didn't mean the lease was done, so ABC sublet the space to another production, the movie Angels Sing starring Willie Nelson. After the one-year lease was up, Bieneman thought he was out of the TV business, so he rented the space as a warehouse again. "Then my agent calls and says, 'This is really weird. Warner Bros. just called, and they'd like to do the second season of an NBC prime-time show called Revolution.' 'Same rent?' 'Same rent.' 'OK.'"

A year later, Revolution moves out, Warner Bros. calls again, and books the space for season 2 of The Leftovers. "I start thinking, 'Well, we may not be that bright, but there's got to be a reason.' So I come down and I see a director and a stunt guy, and I say, 'Why are you guys down here?' They say, 'You've got the biggest and best TV studio in Texas.' I have two business partners; I called them up that afternoon and told them, 'This half of the building will forever be a film and TV studio.'"

“We want people to go back to Hollywood and New York and say, ‘We had a really good experience.’”

What had originally appealed to ABC – and now to AMC, which is shooting a second season of Fear the Walking Dead out of the studio – is the space: 105,000 square feet, with 33-foot ceilings and a 5-acre back lot. Another huge plus was the transportation: not just easy highway access, but 11 truck bays, plus one ramped doorway big enough to back a truck right inside the studio.

However, space isn't everything. The last eight years have seen massive renovations, partially driven by studying other studios (this year alone, Bieneman has visited facilities in Shanghai, Mumbai, Bucharest, Sofia, Rome, and London), but mostly by his tenants telling him what they need. The 15,000 square feet of offices had to be updated for production needs; the studio space itself, all 90,000 square feet, was broken into three sound stages, with 14,000 square feet set aside for milling and construction, and a 3,400-square-foot secure wardrobe.

True, it helped that Warner left a lot of fixtures and fittings behind, and the building itself had a lot of essential infrastructure, like an industrial-grade power grid and a U.S. Foodservice test kitchen that converted easily into a production canteen. But that wardrobe needed a laundry, so one was built: Out came the buzzy, sickly yellow commercial florescent lights and in came less distracting LEDs; and most warehouses don't need gigabit internet for handling the huge data files that are part and parcel of modern TV production. Then there were the bathrooms, which were fine for warehouse work, but production crews working 60 to 80 hours a week in the office need something a little more comfortable. Post-remodel, Bieneman said, "Someone said when they went in, 'My God, it's like a Kimpton Hotel.'"

Yet this was all happening on one side of the lot. Over on the other half it was still a working warehouse, but the current tenant, Calendar Holdings, has announced that they are relocating to New Braunfels. With their exit confirmed for the end of February 2020, ATX Studios will take over the remaining 125,000 square feet of the facility and turn it into a mixture of studio space and offices. "It needs some work," Bieneman admitted, "but even the way it is, it's better than when Noah Hawley came here."

While ATX Studios expects to remain attractive to TV shows, the expansion isn't banking on that. Bieneman, still a businessman at heart, said he saw a low ceiling to how many shows Texas can support, even with a 56% increase this year to the Texas Moving Image Industry Incentive Program, the state's TV and film rebates. What he sees the new space doing is filling all the other gaps – space for shooting pilots, commercials, and films, and especially for flexible, short-term-lease production offices – which are currently in short supply in Austin. He said, "What's that saying, an army marches on its stomach? Well, a TV show marches on its offices."

For Bieneman it's about making Austin – and ATX Studios – more attractive than any of the national competition. "We want people to go back to Hollywood and New York and say, 'We had a really good experience.'"