"If you hate what you're seeing, you call it sex and violence. If you like it, you call it 'romance and adventure.'" – Joe Bob Briggs

When the rackety sprocket gods of the 42nd Street grindhouse Valhalla and their Lone-Star-swilling country cousins – the demoniacs of the dead end drive-ins – birthed countrified critic-fu sensei Joe Bob Briggs way back in 1982, the world of cinema was born anew. Rumor has it that the heretofore sacrosanct pages of Cahiers du Cinéma briefly burst aflame, lit from within by the glow of St. Hooper's Fire; Pauline Kael's fountain pen ran red with the blood of untold numbers of backseat deflowerings; and Rex Reed inexplicably transformed into a pillar of Sweet'N Low. It was a momentous occasion, and across the land, lovers of heretofore disreputable moviemaking rejoiced. Their champion had arrived.

Nearly four decades later, Briggs – in reality the alter-ego of John Bloom, redoubtable film scholar, investigative journalist, multi-award-winning author, and cineaste – continues to level, if not utterly destroy, the cinematic playing field between Jean-Luc Godard and Ray Dennis Steckler while hosting his newest televised incarnation, The Last Drive-In, on horror-centric streaming service Shudder.com. It's a testament to Briggs' perpetual populist popularity that its 24-hour marathon debut completely crashed the service. That's fitting, since so many of the 4,000-plus drive-in theatres that lit up the American nightscape during the peak era of their popularity in the 1950s nearly always came with at least one carbon arc projector bulb liquefying a jammed 35 mm film frame, thus resulting in whatever was being screened that night turning into Rick Baker's The Incredible Melting Man. Hey, you buy your tickets, you take your chances.

Now, Briggs is touring behind his all-new live exploitation presentation/lecture, How Rednecks Saved Hollywood. The two-hour program is part multimedia cultural history lesson and part wily and humorous inquiry into the hillbilly and country boy as all-time-best American antihero. Who would've guessed that the Great American Redneck evolved from the frigid wastes of Scotland before finally landing in Appalachia and morphing into every chaw-chomping, rubber- burning hellraiser from Burt Reynolds' trans-American badass Bandit to the wild, midnight moonshine riders down that legendary Thunder Road? Robert Mitchum his own bad self crooned the red-hot rockabilly theme song to that classic of American outsiderdom, but the lyrics could just as well apply to Briggs' explication of the enduring panache of the American redneck: alcohol, thunder, fast cars and faster women, and, as always, those goddamn revenuers trying to pilfer a poor man's hard-earned hooch profits.

Alas, the heyday of the brick-and-mortar drive-in movie theatre is long gone; estimates put the current number of functioning drive-ins at roughly 330, a precipitous decline from their 1950s-60s glory days. But take heart, even if it's not from the backseat of your '55 Chevy Bel Air hardtop. Joe Bob Briggs, like those fabled molar-yanking Jujube candies of yore and the iconic all-American redneck, is sticking around to make sure that the memory of those hot-topped holy shrines to A-plus B-movies and starlit summer nights remains unforgotten. 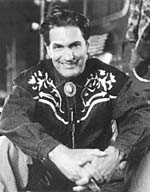