From the Fonz to Gene Cousineau: Henry Winkler's Career of Fearless Reinvention

The man who defined cool of the changing demands of acting, being an icon, and the joy of fly fishing 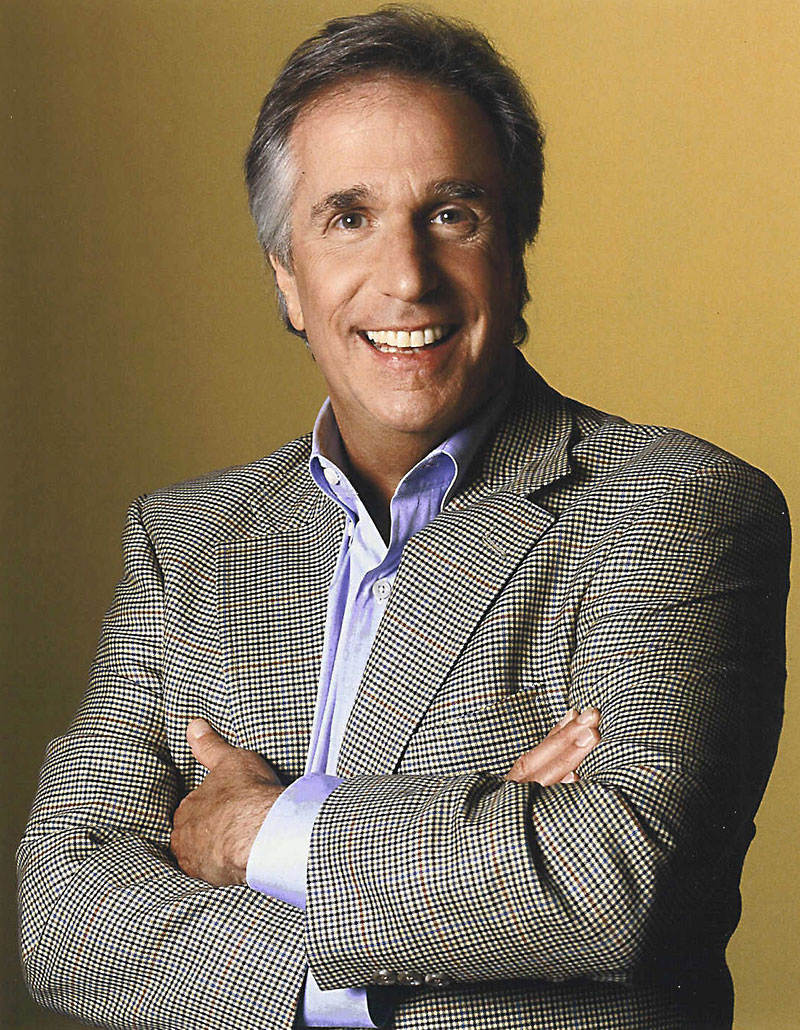 Henry Winkler has momentum. He always has. The Yale graduate took the minor supporting part of Arthur Fonzarelli on the breezy sitcom Happy Days and turned him into the Fonz, the epitome of cool. When the show was canceled after 11 seasons, he became a producer, a director, an author, plus kept acting on TV, film, and stage. His recent Emmy- and Golden Globe-nominated performance as acting coach Gene Cousineau in HBO's Barry is just another spin of the wheel.

At 74, he shows no sign of slowing down. "It does not interest me at all," said Winkler, who was taking a break from writing the second book in his new Alien Superstar series of kids' books (following on from his popular Hank Zipzer series), before filming some independent films, producing the next season of MacGyver, and then season 3 of Barry starts shooting in March. In the middle of that, he's heading to Austin, where he plans to stop by two of his favorite local eateries – Franklin Barbecue, and most especially Loro. "Oh my god," he said. "I'm sitting here now thinking that when I get off the plane that Loro's where I'm going to go first." But the priority is meeting with fans at this weekend's Wizard World convention. "It's where you really do get to meet the people that are responsible for keeping you on the air," he said.

Winkler's last trip to Austin was in March for SXSW. He was supposed to be publicizing Barry, but he ended up pulling double duty as a real life Gene, hosting an acting workshop. "I thought, oh, this will be great." He put out the call, asking people to prepare a 90-second performance ("a monologue, a song, a poem, whatever it is, and then we'll work on it together"). He expected maybe 50 people: He ended up with 600, and every one was memorable to Winkler. "This wonderful 56-year-old person who wanted to do a poem all his life. A women, 49 with five children, who flew from Israel. A young couple from Austin, in their early 20s, who did a scene together. A CEO. It was astounding. It was one of the best experiences of my professional life."

Getting in front of an audience is scary, but getting past that fear is something Winkler knows a lot about, having reinvented himself and taken huge career leaps time and again. His guide to taking on a role is simple. "My stomach," he said. "I know when I read it that, yes, this is something I can do. I know if I'm really frightened by it, I must do it – because I can talk myself out of anything." What he avoids, he added, are roles that are "like eating celery. If there's no nutritional value, that's when I walk away."

When it came to playing Gene, as always it came down to the script, which he described as "like reading cashmere." But when he first read the part, Winkler said, "he was written much darker, much meaner, much more of a louse. He was the teacher who went, 'If you can't do it, teach and be angry about it.'" What Winkler feels he brought to the character, and what series creators Bill Hader and Alec Berg responded to in his version, was warmth: "He can't help but care a little bit." “He was written much darker, much meaner, much more of a louse. He was the teacher who went, ‘If you can’t do it, teach and be angry about it.’” Henry Winkler as acting coach Gene Cousineau in Barry with Bill Hader

Austin Chronicle: Over five decades of performing, the craft changes. How do you keep up with the evolving nature of acting?

Henry Winkler: The craft changes because if you keep concentrating on it, it matures with you. I was 27 when I got the Fonz, and I had now gone through college, majoring in drama and minoring in child psychology. I went to drama school at Yale where I got a masters in theatre, and you know what you want to do but I was a late bloomer. So as you get to know yourself better, you get to know your character because inside of every character is you. That's why Shakespeare is popular after 500 years, because everybody in your family is in one of those plays and they act exactly the same way. They're crazy or conniving or loving or misguided or confused. Every character you know from your aunts and uncles and brothers and sisters and mothers and fathers.

When we were shooting [Happy Days], it was film. So you had these gigantic cameras on dollies with 10 minutes of film, so you could only do 10 minutes at a time and you had to stop and change the film. Now, with a little cartridge, you can go 40 minutes.

AC: How does that affect the work for you as a performer?

HW: It's the degree of concentration. When they changed film, you could not let down, you couldn't break from what you were doing, because you had to stay in the moment. With tape, you have to stay in the moment longer, and really that's it. Where you see what they film and how they film has changed. The cameras are smaller, it's longer, the process is much more magical, they can do things that are shocking now with these cameras and the editing. You can watch it on your phone on the plane – crazy. But the making is exactly the same. You still need great creators, great directors, great technicians, wonderful actors to work with, and until we become holograms I don't think that's going to change.

AC: And you clearly are someone that has wanted to stay engaged with the evolving art, and the industry as a whole.

HW: I'm telling you, you just hit it. That is absolutely the truth. I pinch myself when I drive through the gates of the studio to go to work to do something that I dreamt about when I was seven.

AC: Having played the Fonz, you're on that list of actors who have created a truly iconic character, and that can be both a blessing and a curse because it can overshadow whatever plans you had. You have to evolve a relationship with the character, because they're always in your life.

HW: First of all, for me, it is amazing because the Fonz introduced me to the world. So no matter where I were go, someone on the street invites me home for dinner. That's quite a wonderful thing.

Number two, there was a time when it was difficult because people would say, "Well, he is so talented, he's so lovely and funny, but he was the Fonz," and that's when I became a producer. Then in 2003 there was a lull, and that's when I became a writer. It all happens by chance, and it's whether or not you're willing to say, "I'm going to try this. I don't think I can do it, I'm not sure, but I'm going to try to do it." And then 35 novels later ...

It was literally a time filler. It started off just as an experiment, to write. I never thought I could just do this. For me, I was filled with anxiety. Am I ever going to be able to earn a living, to provide for my family? What am I going to do? So I kept reinventing myself out of panic.

The thing is that I love that I got to play him. We went on the air in 1974, and the next generation down watched it in reruns, and the next generation down watched it on DVD because their parents said, "Oh, you should see this." And the warmth that I given on any given day, walking down the street, talking to somebody on the phone, traveling on a plane, walking through an airport. Holy moley. That's not something that you can dismiss.

AC: So how do you prioritize what it is you're doing, or balance out between all your different endeavors?

HW: I don't think about it. In the morning, when I'm here and I'm not traveling, I meet my partner [Lin Oliver] in her office and we write until 12:30, 1 o'clock. I then go to Paramount Studios up the road and I edit an episode of MacGyver. I speak publicly – before I go to Austin I'm going to Denver to speak at the Global Down Syndrome Foundation. So I have a wonderful life.

AC: That's part of keeping going, to not slow down.

AC: And speaking of keeping yourself constantly moving, how did you take up fly fishing as a hobby?

HW: In the Eighties, my lawyer Skip Brittenham III took Stacey [Winkler] and I down the Smith river in Montana. I didn't catch anything, but I was hooked – no pun intended. Since then we have gone every summer. My technique is still ugly, but the amount of fish has increased.

AC: Is fly fishing ever really about the fish?

HW: For me, I'm competitive, so it is. I would have to be a liar to say it's not. I take photographs, and the only adult book I ever wrote is I Never Met an Idiot on the River, which is photographs I would take while I'm fishing and everything I've learned about fly fishing that I've applied to life. I cannot wait until each time I can get back on the river.

HW: In a day? Seventy-four, and that's not including white fish, but that was way back when. It's harder now, because there's more pressure on the river, more people. Along the Madison in Montana there was the Whirling disease (affecting the development of young Rainbow Trout), there was drought. It really screwed up the ecosystem.

HW: I love them all like my children, and the proudest moment of my life, honest to god, are the books. The fact that my name is on that book with my partner Lin, it makes me out of my mind. Children come up and say, "Oh my god, yours is the first book I ever read." "Oh my god, I laughed so much." Parents will say, "My child wouldn't read." ... I was in Lancaster, Pennsylvania, and I'm going to speak there. I get out at the hotel, and the bellman runs out from behind his desk. He's now 25, and he said, "Oh my god, your books got me through school." I thought he was going to take my bags, and the first thing out of his mouth was about Hank.

A version of this article appeared in print on November 8, 2019 with the headline: From the Fonz to Gene Cousineau