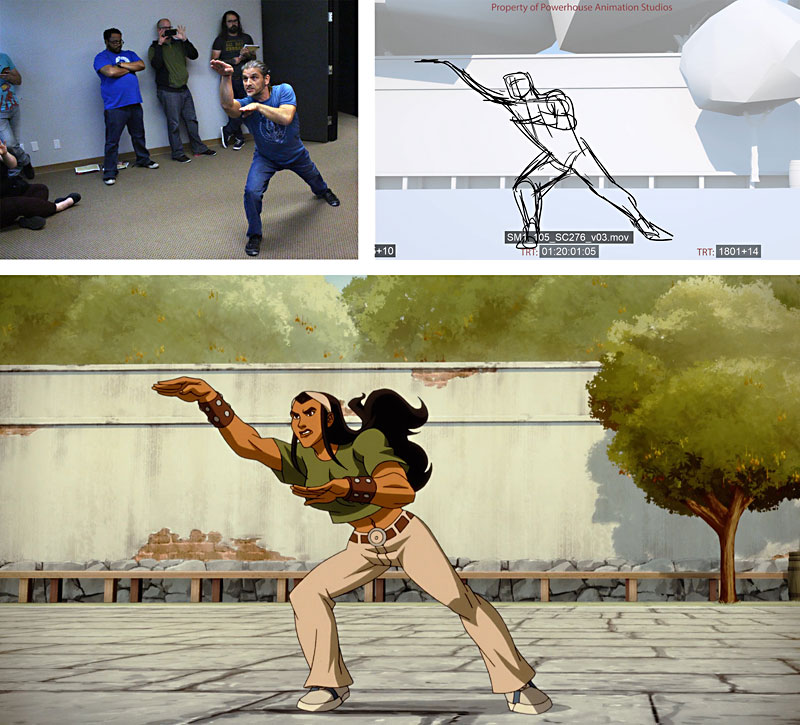 All in the details: Seis Manos' storyboarding process

Brad Graeber has two notepads. They're pocket-sized scrapbooks, crammed with references to martial arts films. In one, he keeps a complete list of every form and discipline used in a film. In the other, an exhaustive record of films and every fight sequence – where it takes place, what weapons are used, and, of course, the time code.

It's an obsession that has led to his company, Austin-based Powerhouse Animation, unleashing their new show Seis Manos on Net­flix last week. And it all began with those notepads, and how the Powerhouse storyboard team turned them into some of TV's most thrilling and unique action sequences.

The last three years have seen Powerhouse go from video game cutscenes and adverts (both still part of the business) to animating major shows like Castlevania for Netflix. Yet Seis Manos – the story of three orphans in Mexico seeking bloody revenge for the death of their kung fu sensei – may be the most meaningful for co-founder Graeber. Not only is it the company's first original series, developed in-house, but it's also a summation of his childhood influences, beamed into his brain watching grindhouse movies on UHF channels. "You'd see Kung Fu Theatre, you'd see Monster Theatre, they were all Seventies films," said Graeber, "and to me they all existed in a similar box."

Still, Seis Manos was a tough sell. Graeber starting developing the show in 2014 but was constantly rebuffed. "'It's not tied to a toy, it's not for 11-to-14-year-olds or 6-to-11-year-olds.' ... People who were friends would say, 'This is really cool, but it will never, ever happen.'" But it was more than simply a cool idea to Graeber; he wanted to expand the kinds of stories told in animation: who is portrayed, and who creates them, "and now we have an opportunity to do this, it's the kind of thing I want to do more and more of."

Like everyone at Powerhouse, series director Willis Bulliner said Graeber would give him details about Seis Manos "in little spurts [and] I said, 'That sounds awesome. I want to be a part of it in any way that I can.'" When anime experts Viz Media first expressed interest in the show, Graeber had Bulliner work up some storyboard samples, "Then it was, 'Oh, we got picked up,' and then we hit the ground running."

But while the show came from Graeber, he also knew when it was time to step aside and let other voices in – most especially Latino artists. The first big addition was scriptwriter Álvaro Rodríguez, co-writer of Machete and fresh off a run as story editor on Chicago Fire. Graeber credited him with giving the show heart and soul, as well as a deep knowledge of Mexican mysticism and cinema. "Every little thing he puts into the script has some 1930s Mexican black-and-white film that it ties back to, but also its own unique thing."

Once Viz and Netflix decided to pick up the series, on came co-writer Daniel Domin­guez, while Powerhouse staff animator Eddie Nunez was in charge of character design, giving the show its trademark flex and sinew. However, suddenly Powerhouse was working on three shows: Castlevania, Gods & Heroes, and Seis Manos (and has now added the revamped Masters of the Universe), and that meant the team had to grow quickly. "That immediate ramp up can be scary," said Bulliner, "but when they say, 'the series is a go,' then you need people."

First up was that storyboard team. Patrick Stannard had been working as an animator on Castlevania at that point, while Cassie Urban had been working on boutique animation, and both were looking to move sideways into storyboarding. Then Abbie Bullock, Julie Olson, and Giselle Rosser came on as new hires. According to Graeber, the storyboard artists quickly became the biggest advocates for and fans of the show. No surprise, since they were in from the start of the animation process, and modern digital animated storyboarding isn't just rough layouts. It's the first pass of a show, the muscle and bones under the story, and the Powerhouse team went further than most. "It looks like key animation," said Graeber. "They try to make the action as clear as possible, because we don't want that to change."

Rather than breaking the work up by scene or by character, Bulliner assigned certain locations to each team member. "If we cut between two different locations for quite a bit, then a board artist might get two or three sequences in the Plaza Seis Manos, and another artist would get another location. It was a whole lot easier to get one model and just [storyboard] there, than hop through a bunch of different ones." At the same time, he looked at the individual strengths of the animators on character beats – who had a flair for spectacle, who could bring out the softer emotional beats – and tried to fit them where their skills would have the most impact.

However, as deadlines loomed, the close-knit team depended on what Rosser called "mega-collaboration," with everyone's fingerprints on the big final action scenes. Olson added, "It was like jumping into the ring and going, 'Tag me in!'"

When it came to creating a unified style for the fighting sequences, Olson said, "Brad and Willis kept us grounded." Unlike other fantastical shows, Seis Manos relied on real kung fu, "and that was a nice challenge. It capped us in a good way, because we had to get creative with these characters and the kung fu that they know."

That's where Graeber's notebooks became really helpful: that, and the fact that Graeber actually studies kung fu under Thomas Leverett (Sifu Thomas, as Graeber calls him) of Del Sol Yoga and Kung Fu. Having a martial artist on-set for live-action is standard, but Graeber credits Nickel­odeon's Avatar: The Last Airbender with adding that same discipline in Western animation – a discipline he brought to Seis Manos by bringing Leverett to the studio for the storyboard team to film and study. "Everything from where you twist to where you place a foot for the coming up of the next move – those details add so much."

Even so, while having a martial arts master on call for reference meant a richness of resources, the muscle memory instantaneousness of kung fu had its downside. Rosser said, "We'd have a moment where we'd go, 'Well, there's these two guys on this side,' and [Leverett would] go, 'Well, I'd just do this.' 'Oh, great, can you do it again? We totally didn't catch it on camera.' He'd say, 'Do what?' He had a million ways to do any fight sequence."

Seis Manos is on Netflix now.