Fantastic Fest Asks "Who Is Wrinkles the Clown?"

And why do we want him to scare us? 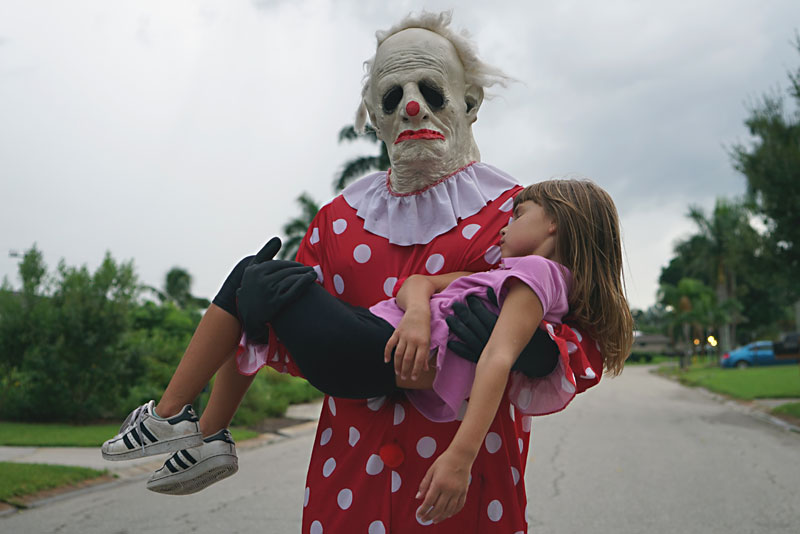 When did clowns stop being funny? Some time in the closing years of the 20th century, they went from buffoonish jesters to the ultimate in invasive creepiness. "Kids today don't have any positive clown role models at all," said Michael Beach Nichols. Maybe it was John Wayne Gacy, the serial killer who slapped on the grease paint to entertain kids. Maybe it was Pennywise in Stephen King's original novel It. Maybe it was both, "a one-two punch that was the beginning of the end," said Nichols.

And there's no clown creepier or more invasive than Wrinkles the Clown. In 2014, there was a terrifying viral video of a man in a polka dot suit and mask clambering out from under the bed of a sleeping small child, reaching up and turning the nanny cam away. Nichols said, "Someone sent me that CCTV footage, and I thought it was completely insane."

Nichols' documentary Wrinkles the Clown (which gets its world premiere this weekend at Fantastic Fest, before arriving in cinemas on Oct. 4 through Magnet Releasing) isn't his first film dealing with America's nightmares. In 2015, before the rising racist tide was on the political agenda, he chronicled the plot by a gang of white supremacists to take over a North Dakota town in Welcome to Leith. He's also dealt with nontraditional artists before, in his 2014 Brooklyn street dance documentary Flex Is Kings. So when the Wrinkles story first appeared, it was too good to miss – not least because it was basically a hometown story. Wrinkles lives in Naples, Fla., while Nichols was from next door in Fort Myers. "I've always been very keyed into Florida weirdness," said Nichols, "and ever since I've left Florida I've come to appreciate more as being this weird place."

Normally, clowns that hide under kids' beds are hard to track down. Not Wrinkles. What Nichols found was that he was hiding in plain sight, leaving his phone number around. Parents could call him, and ask him to scare their kids. Then kids found the number and would call him, daring the hollow-eyed jester to hide under their bed. Turns out, Wrinkles was quite happy to talk to Nichols about exactly why he was happy being the bogeyman. Not only that, but he gave the filmmaker access to an invaluable resource: his Google Voice archive of all those kids and parents who want to invoke his wrath. Nichols said, "It's up to 1.6 million calls and texts and messages that have been left since the number went out around 2014."

But who is Wrinkles? That's the question Nichols poses, as he tries to portray a man who resolutely wants to stay behind the creepy mask. However, what he quickly found was that it's the myth of Wrinkles that is most fascinating. "His larger-than-life presence on the internet is very 21st century, and the way he has bridged the gap between IRL and the internet is really interesting," said Nichols. But what is most fascinating is how audiences have embraced him, reached out to him, created this larger-than-life Wrinkles – like Slenderman with voicemail. Those recordings in Wrinkles' archive, Nichols said, "allowed us to tell a story of people taking these cryptic, creepy videos, that masked face, and that phone number, running with that, and myth-building in real time."

Austin Chronicle: This is basically a case study in semiotics, with the sign, the signifier and the signed of Wrinkles, of what he is, what he projects, and what people are taking away and creating. At what point did you decide that you had to talk about not just who Wrinkles is, but also what he represents – and how did you even get him to work with you?

Michael Beach Nichols: Before we had access to him, and before we knew we could get access to him, we were very, very curious who Wrinkles was, why he was doing it – and then when we got the archive we went, 'Oh, shit, there's so much here to explore.' And once we got access to Wrinkles, because he didn't want to be revealed, we decided it was more about the myth.

We don't reveal who he is in the film. We film with him, we were filming him in the van he lives in much of the time, we follow him as he's doing some scares, but we don't show his face. That was a precondition of him giving us access. We still talk about his motivations, we talk about his biography and what led him to that point. So you're getting a little of that, but for us and for him too, he was just very taken aback by how viral he went. He had no idea that he would get hundreds and hundreds and thousands and thousands of calls coming in over a span of four years. It just blindsided him, and he was very fascinated and sort of disturbed by a lot of the calls that were coming in, and responses that people were having to that phone number. So for him, and then ultimately for us, it became more interesting to see other people's ideas of what this clown is like and his life is like, without having any other information besides a face, a phone number, and a couple of videos.

AC: Since the whole thing is the mystique, how did you convince him to work with you – especially since he's so constantly bombarded with contact from complete random strangers. How do you even get him to return the first call?

MBN: It's never easy, but with Wrinkles it wasn't as difficult as we feared. A big part of that was because I grew up in Fort Myers, I was from Florida, so that was a point of connection. And then as you make film after film you start to have a bit of a track record, so I was able to share with him what I had previously done.

It was really funny: We were going through some of these calls, like Hollywood agents trying to get his life rights for the narrative adaptation. He was definitely getting so many talent agents and filmmakers trying to get access to him, but I think I got lucky because of the similar geographic knowledge that he had, and also because of the films I'd made.

AC: And I can imagine it was a change of pace after doing something as charged and dangerous as Welcome to Leith.

MBN: In some ways it was definitely a pleasure, because you're doing something that's not as stressful as that project was. But in others this was a very complicated project, because a big part of every day during pre-production was texting these phone numbers that we'd culled from this Google Voice archive – basically kids who had left what we thought were interesting messages, for one reason or another. So we're just texting a lot of children all day long, and not getting a response.

Originally we were calling people, but it was just so much, "Oh, hi, I'm a filmmaker and I'm calling because someone from this number called Wrinkles the Clown." We'd get hung up on, so we went, 'OK, we need to text people, to lay out why we're getting in contact with them.' Once you get through to the kids, then it's like, 'OK, let me talk to your parents.' So it had its own set of very unique challenges that were very stressful.

AC: I can imagine that you got a lot of very angry parents.

MBN: Oh, for sure. A lot of them think I'm Wrinkles. That was a big thing. 'Oh, no, you're Wrinkles.' 'No, he just gave me access to these calls.' It was totally ridiculous for about three months. All very surreal, as we were talking to kids for the most part. We did find some parents, thankfully, that had called Wrinkles and used him as a disciplinary tactic, and we were able to get access to them as well. Ultimately we were successful, but there were several months where we were just like, 'This project is going to be impossible to complete.'

A version of this article appeared in print on September 20, 2019 with the headline: Send in the Clown