Here to do the devil's work 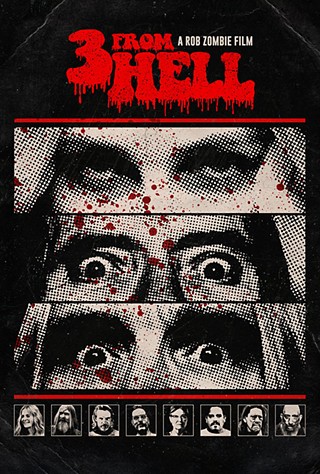 And that was where the story seemed to stop. After all, the denouement was the last remaining members of the kith and kin killers – devious clown Captain Spaulding (grindhouse icon Sid Haig), cheerleader from hell Baby (Sheri Moon Zombie), and the merciless Otis (The Texas Chainsaw Massacre 2's Bill Moseley) – getting gunned down by the law in a Bonnie & Clyde-style ambush. Dead, finito, pushing up daisies, right? That was what Zombie thought, too. But 14 years later, the Fireflies are reignited in the third and (he's pretty sure) final installment in their bloody tale, 3 From Hell. But how did they escape the grave this time?

Truth is, Zombie said, they never really stayed buried. "Every day I'd see another T-shirt, action figure, Halloween costume, tattoo. So they were always in my life, constantly." After years of idle thoughts about how to potentially revive them, around three years ago, "I was like, 'I think I've got this figured out. Fuck it, I'm going to see if I can make this happen.' No one's getting any younger, everybody seems like themselves, it's now or never."

His first intent was to make a third film that felt truly different – just as he didn't want The Devil's Rejects to be House of 1000 Corpses 2. Instead, he wrote an ambitious, international three-act structure. "Any one of those scenarios could have been the whole film," he said. "'OK, we're a prison movie,' 'OK, we're a home invasion movie,' 'OK, they're only in Mexico.'" But by stitching them together, he said, "we make it a Part Three that's an actual Part Three, not just, 'Well, that's Part Two again.'"

Getting the crew back together wasn't that hard: In fact, the biggest resistance came from closest to the writer/director – his wife, Sheri. "She was the most skeptical," he said. "She goes, 'You know what? The last movie was great, it ended great, and we don't want to ruin it. Obviously I'll read the script and if it's something I want to do, I'll do it, but that's my thought.'"

It was a dinner with Moseley and Haig that sealed the deal for her, but that's not who the eponymous three are this time. Spaulding takes a back seat, and enter Winslow Foxworth Coltrane, aka Foxy, played by British character actor Richard Brake. He's the lost half-brother of the family come back into the family business, and without the *ahem* calming influence of the Captain, the children will bicker. Zombie said, "Baby's off on her own, and Otis feels like he's public enemy number one. But then you have the half brother who feels like, 'What about my rep? I'm a badass as well.'"

Austin Chronicle: The biggest change between The Devil's Rejects and 3 From Hell is that the three isn't who you expect it to be, with Sid Haig in a much smaller role and Richard Brake as the lost sibling.

Rob Zombie: To be honest, Spaulding was supposed to be prevalent, because the three from Hell was the main three. That was the movie I wrote, that was the movie I was getting ready to shoot. When someone's that age, a lot can transpire within the course of a year, and a couple of weeks before we were getting ready to shoot, I found out Sid was in the hospital. I went to visit him and he looked like he had lost half his body weight. He looked like a skeleton compared to what he used to be, and he looked really ill. He's 80 years old, and even a healthy 80-year-old is frail. So I was like, "Aw, crap, he's not going to be able to handle this movie." So I started rewriting, lessening his role, because if you're shooting a movie, and you're going to be one of the leads, it's hard and you can't expect someone who is 80 years old and not in good health to do it because you would kill them.

As we got closer and closer, and more thing progressed, I hoped he would get better but he really didn't. And, as with all actors, he had to be cleared with the insurance company. So he had his physical and they went, "Nope, not gonna happen." So at that point I was like, "Aw, fuck." It's two weeks, the set were built, everybody was cast, it was go time. So I quickly rewrote the script, created a new character, hoped that Lionsgate would bring Sid in to work for one day - even though technically he wasn't supposed to - and they did, and we got enough to complete Captain Spaulding's story.

AC: Bringing in a new character, one who wasn't part of the first two films, had to change the story dramatically, especially the mechanics of the prison break.

RZ: I was constantly changing it, constantly rewriting it. I went through a lot of scenarios. Some of them were 2 From Hell, but I always conceived the movie with three people and I thought, "Wow, that's a really crazy rewrite, and I don't know if it's as good." But I wanted Richard Brake to be part of the movie. He was in Spain working on a movie, he said yes, he finished that movie, he flew to set and started instantly. He had no prep time whatsoever, so he had to get up to speed right away - as did we all. How does he fit into this world? Who's this character? What's he about? How's this going to work?

But truthfully he fit in right away, and it kind of reenergized things in a way I wasn't expecting. Because when you put the same three actors together, they're going to bounce off each other in the exact same way that you've seen before. You throw a different person in there and the energy completely changes.

I kept rewriting, because as we would move along the character of Foxy would materialize on different ways. Obviously Otis and Baby have been very established, so this other character needed to be just as solid. It was risky, but it worked.

AC: And Richard knows how you work. Having played Doom-Head in your last film, 31, he knows how this train rolls.

RZ: Definitely. If I have to bring in someone I hadn't worked with before, it would have been a disaster. I need someone that I know they're not going to freak out if you give 'em new lines, if you rewrite stuff, if you change stuff the night before. Because it's a real running and gunning way we're working. Some actors can't do that, and there's nothing with that - that's just the way they work and it's perfectly fine. But for this scenario I knew that's how we were going to be working, so I knew I needed someone who was along for that ride, and having just worked with Richard, I knew he would be down for it.

AC: The first film was about the family in complete control of their environment. The second was about them being forced into daylight, and what they're like when they can't control everything. What did you feel you had left to say about them?

RZ: What I thought was interesting was two things. If the Firefly family was real, and that had happened, the celebrity that they'd create would be huge – much like the Manson family. So I thought, OK, that's a good place to start. And also, in real life, the actual characters had become very, very popular. When I made House of 1000 Corpses, it's this little movie, some people know it, some people don't. But 15 years later, they've become their own weird cult of personality themselves. Well, that just plays into what I'm doing, that these bad guys are just these strangely beloved media figures.

AC: Their fame, both onscreen and in real life, creates a fascinating problem. In Corpses, they were clear, pure evil. In Rejects, they're charismatic but not sympathetic. The risk here is making them seem like the heroes up against even more despicable characters – and it even happens in real life, where people like Charlie Manson and Richard Ramirez get this cult following.

RZ: They are despicable but the thing about them is that they're kind of rock and roll, in the sense that you can be a despicable, drug addict, alcoholic idiot but if you write a good song, everybody likes you. They play on that thing that they don't have any redeeming qualities whatsoever, but they're cool and charismatic, so you go with it even though you shouldn't. ... They're three modern day pirates, off to the next adventure.