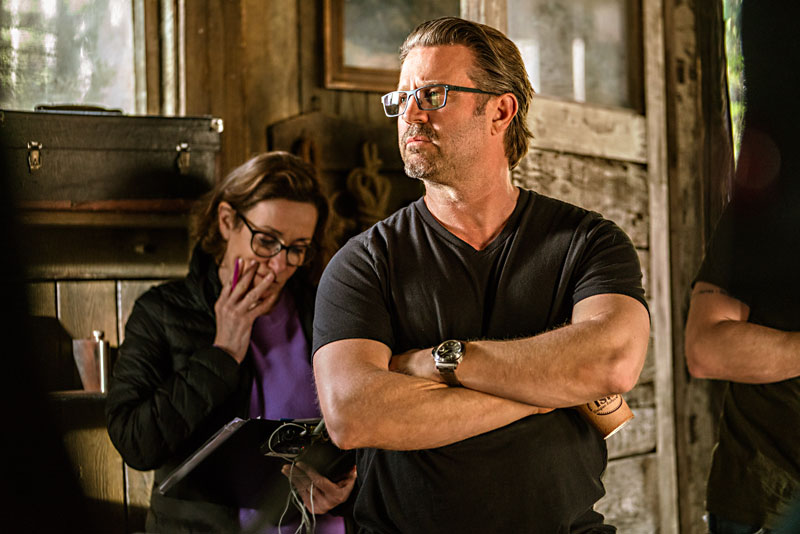 "When [Gerard Butler] called me to come into this franchise and then told me what he wanted to do, it was an easy yes." Director Ric Roman Waugh on the set of Angel Has Fallen. (Photo by Jack English)

Letting a stunt performer direct an action film doesn't sound like a strange choice, but there's something unexpected about Ric Roman Waugh being put in charge of the latest installment in the blockbuster Fallen franchise. In the third film, Angel Has Fallen, the Austin-based director threw out the rules of the hyperbolic series and created the year's most subversive action film. "It was a dream come true to put my stamp on it," said Waugh, "but at the same time keep the integrity of what the franchise means to its fan base."

Waugh's an expert at covert filmmaking. On the surface, 2013's Snitch was a gritty early feature for the Rock set in Waugh's adopted hometown, but hidden in the story was a savage indictment of mandatory minimum sentencing. Same deal with Shot Caller: What looked on the surface like a star vehicle for Game of Thrones' Nikolaj Coster-Waldau was really an inside view of what the penal system does to people. Both movies were inspired by Waugh's time as a volunteer in the California parole system. So why would an ex-stunt coordinator-turned-activist filmmaker take on a run-and-gun franchise like this? It all came down to star Gerard Butler. "Gerry and I have been wanting to work together for a number of years, and we'd been trying to work out what to do and when our schedules would line up. When he called me to come into this franchise and then told me what he wanted to do, it was an easy yes."

The basic mechanics of the franchise are still there, as Secret Service agent Mike Banning (Butler) must yet again deal with an assassination attempt against now-President Allan Trumbull (Morgan Freeman). But while Olympus Has Fallen and London Has Fallen were just sprints between action set-pieces, Angel Has Fallen looks at the intergenerational trauma of war and military service and the addictiveness of action, all while issuing an Eisenhower-esque warning about America's perpetual war and reliance on military contractors and mercenaries. It's as if Sylvester Stallone had made Rambo II and III, and then went back to make the original First Blood – a film about PTSD dressed up as a survival horror. Waugh said, "The idea was to take the big, action-packed spectacle and ride of the first two movies, and then create more of an origin story. As the first two movies were about an event – the first one was about the taking of the White House in Olympus Has Fallen, and the second one, London Has Fallen, was about the assassination of the world leaders – make this one about the man."

Angel Has Fallen sends Banning on the run, set up as the fall guy for an attempt on Trumbull's life. By making Banning a fugitive forced to deal with his own damage, Waugh said he was able to "show his flaws, show his vulnerabilities, show the cost of duty and honor, and the addiction to carrying the gun."

This isn't just another story of an old warrior who suddenly becomes a sprightly action hero when the scene demands. Waugh has always been a details director, and the way Banning is determined to still be the two-fisted hero, even as his body breaks down, is something he dealt with directly in his 2015 documentary about Iraq and Afghanistan veterans, That Which I Love Destroys Me. Even though one of the central figures in that film, ex-Delta Force member Tyler Grey, had his arm mutilated by an IED, Waugh said, "He's dealing with war addiction, dealing with the fact that he's not running from war, he would do everything he can to get back into it because that's how his brain is wired now. ... It's no different to being a professional athlete. You'll do anything to stay on the proverbial field."

Waugh makes it clear that while this film has a point to make, he hopes it's informative, not didactic: "When I come aboard," he said, "I'm always going to want to take on hot-button issues, but I'm never, hopefully, giving you my opinion." Yet as Americans begin to really process the impact of its seemingly never-ending war, of widespread PTSD and traumatic brain injury, and of a global legacy of violence, his version of Banning could well be the hero audiences are waiting for – the one who cannot just mosey into the sunset. He said, "People are tired of the mindless action fare that has been going in, where your protagonist is impervious to pain, impervious to flaws, impervious to danger. We wanted to make him mortal."

Angel Has Fallen opens this weekend. See review and showtimes. 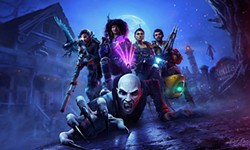 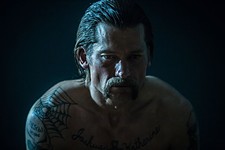