On the shores of the border with filmmaker Sara Selig­man Falcon Lake is a place of contradictions. A beautiful 40-mile reservoir on the U.S./Mexico border, it's a wonder built through international cooperation. When it was completed, Mexi­can president Adolfo Ruiz Cortines and his U.S. counterpart, Dwight D. Eisenhower, shook hands there as a sign of amity. But alongside some of the best largemouth bass fishing in America, it's now also a watery crime scene, with smuggling and even piracy. "It's martial law there," said writer/director Sara Selig­man, but the lawlessness allowed her artistic liberty for her debut feature, Coy­ote Lake. "It allows me to let these women get away with what they get away with."

"These women" being Ester (Camila Mendes) and her mother, Teresa (Oscar nominee Adriana Barraza), who own a boarding house by the lake. Yet Teresa has found a way to supplement their income: one that takes advantage of the area's lawlessness but is destroying her daughter's future. Seligman said, "She's not letting her daughter grow up because they live in such a violent place, and that's the only way she knows how to protect her."

For Mendes, the excitement of the story is in Ester's struggle to be normal when her life is so abnormal. "It's what she's been doing with her mother for as long as she can remember." However, that means she has normalized brutality. "Just a few deaths," she laughed.

Seligman said Coyote Lake combines her two favorite aspects of being a filmmaker: "The deep characters and the relationships [and] the fun stuff with the guns and the blood." Yet, as a woman making a violent crime flick, she still faced nearly a decade of challenges to get it written. "When people read my script, people are shocked when they meet me. I think they have an idea in their head of how someone who would write something like this would look, and I don't look like what they have in their head. ... So if they don't think I'm capable of writing it, how can they think that I'm capable of directing it?"

The real lake's sinister history inspired this dark thriller: In 2010, McAllen resident David Hartley went jet skiing with his wife there, ended up on the Mexican side, and was murdered by pirates. Seligman said, "The police tried to do an investigation, but the cartel didn't let them get in there." She started researching the story, and found it was not the only such disappearance. "It's so weird to me that, in the world we live in, in America, in Mexico, there is this place that people are not talking about. ... It's scary and, as a writer, really interesting."

Coyote Lake is one of the most recent productions at New Republic Studios in Bastrop, and Seligman estimated that the crew shot "90 percent of the movie here. ... It has the stages, but it also has the acres and acres of land." The studio covers terrain as diverse as prairies and ponds, rivers and cliffs, and, being in Texas, Seligman said it added local authenticity "by having the nature that surrounds a place like Falcon Lake, and not having to cheat it." That Lone Star veracity was essential: "Sometimes we tell these stories, and it's in a really faraway place, and people can detach themselves. It's right there, it's in our backyard."

Yet while the border is the inspiration, for Seligman it's the setting, not the story. For her, Coyote Lake is "a mother-daughter story, a coming-of-age story – that cutting of the umbilical cord. That's what's most important to me."

Coyote Lake opens in Austin this week. Read our review and get showtimes right here.

A version of this article appeared in print on August 2, 2019 with the headline: On the Shores of the Border 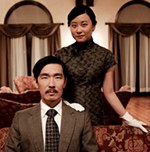