The New-Look Songwriters Across Texas Goes Beyond the Honky-Tonk 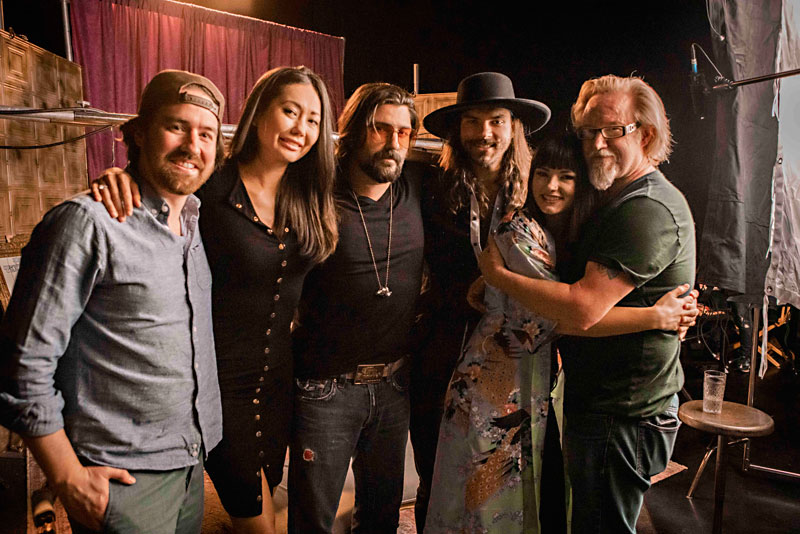 There's a lot more to Texas music than honky-tonks, and the newly revived music series Songwriters Across Texas wants to expand that representation on TV. Series producer/director Ben Foster said, "There's a lot of people that don't get to fit into 'Texas music' because they don't get to use that brand, and they should be allowed to as much as the country guys."

The music performance show, which returns to the CW Austin this July, is a change of pace for filmmaker Foster, who had festival success in 2017 with his Austin-shot sci-fi drama, Time Trap. It's also the first production credit for character actor Karl Anderson. The pair first worked together on the set of Foster's 2011 crime drama, Strings (about, coincidentally, a musician), but the origins of this new version of the established show actually predate that collaboration. Foster had been working with Austin institution Band of Heathens around the time of their eponymous 2008 debut studio album, and he pitched the idea of a show following local bands around town and mixing performance and interviews to now-defunct Austin-based METV (not to be confused with national, free-to-air retro channel MeTV). Unfortunately, Foster said, "By the time we had it done, [the station] was out of business."

Great ideas have a way of coming back and striking different minds, though. In 2012, music lover Pitt Garrett went into semi-retirement from his day job as president of Austin Brokerage and turned his passion toward Songwriters Across Texas. It was very similar to what Foster had been working on – interviews spliced with live performances at venues around town and beyond – and Garrett produced six seasons of the show for the CW Austin, plus a radio spin-off. In 2019, he handed the reins over to producer Bruce Craig, who saw the potential in the format. Foster said, "He wanted to do something a little bigger and a little more streamlined, and that's where Karl and I came in. ... As Austinites, we feel this city has a responsibility to support its musicians, and encourage them, and give them a platform, and it's such a cool thing for us to be able to do that finally."

Their working relationship was clear: Anderson knew the music scene and conducted the interviews, while Foster wrangled the filmmaking. However, it was going to take both of them to handle the complexities of the new-look show. Arguably, the biggest change in the format is that rather than catching the musicians out in the wild, the new iteration of Songwriters brings them into the more controlled environment of Austin Studios. Yet this is still a small production, so the team packed in a hellacious filming schedule for season 1: 12 sets in three days. The first day was the craziest, with five shows in total, starting at 10am with songstress Savannah Welch and closing out with a dinnertime extravaganza from local soul legend and literal Texas Music Hall of Famer Miss Lavelle White. If that wasn't packed enough, the team was back in the studio for two more days and seven more sets.

Foster described the setup on Stage 4 at Austin Studios – currently occupied and outfitted by long-term tenant Soundcheck – as perfect for the show's format. "They have a green room, and the band that's on deck goes there. Then they go to the main stage, and while they're doing the set, we're interviewing the band that went before [them] in the third room. So it was a perfect wheel of production." Plus, by comparison to Time Trap, which Foster shot in a Hill Country cave, "This was so easy."

With its multiple load-ins and live audience, Foster compared the show to a three-day festival. However, most festivals don't film 12 acts in three days plus fit in backstage interviews. The biggest scheduling issue on that first day wasn't actually about timing the sets, which went smoothly – it was that Foster forgot to fit in a lunch break for the crew. Looking back, he said, "Five was too much."

"Just one too much," chimed in Anderson, and it definitely didn't impact the performances. "Everybody brought their A game," he added. "I've seen Bill Carter play 40 times over the years, and I've never heard him better."

Alongside local must-sees like Bob Schneider, there's an emphasis on legacy acts in this first season of the revived show, like Savannah Welch and her brother Dustin or a showcase from Ben Buck, son of drum-kit fixture Mike Buck. Yet the show isn't just about the classic ATX singer-songwriter tradition. Ben, who blew up on Austin's rap scene under his rap nom de guerre Filthy McNasty, keeps up the family rhythm tradition through beatboxing. The new season also includes indie-electro rockers Auto Body, plus Georgia-to-Austin amplified folk transplants the Texas K.G.B. "Most of [the] friends I talk to haven't heard of them," said Foster, "but that's one [where] I'm excited to show their performance. That's a cool band."

For Foster, what really sets the show apart from most other music shows are its interviews, which look at the creative process. Anderson said, "There's a lot of common threads, but then everybody has their own unique thing – I call it 'their hero's journey' – and there's so much poetry in some of these stories of how these people got into this in the first place. Super pointed stuff."

While the show has its deep Austin roots and is designed to highlight Texas performers, it's a format that the pair hopes will expand and give their music a national platform: Moreover, Foster said, shows Netflix's like Chef's Table show how fascinating the creative process can be for audiences. He added, "We'd love to get it to a point where we can dive even deeper into their stories and film something really beautiful that tells us where they're from and how they work."

Songwriters Across Texas debuts on the CW Austin on July 6. For classic episodes from the Pitt Garrett era, head over to www.vimeo.com/songwritersacrosstexas.

A version of this article appeared in print on June 28, 2019 with the headline: Old Show, New Tunes