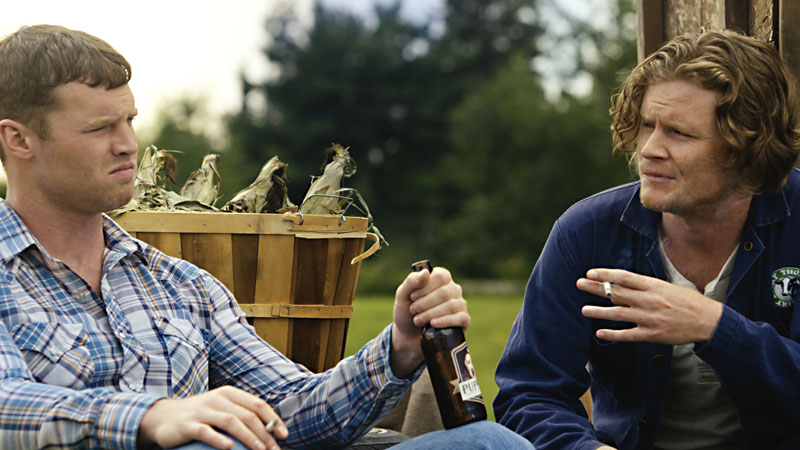 Nathan Dales plays Daryl, best friend to Wayne (series creator Jared Keeso), aka the toughest guy in Letterkenny, and one of the hicks at the heart of the bawdy but brilliant comedy. He met Keeso when they were both jobbing actors, and in 2013 they started making some YouTube shorts "just for shits and giggles," said Dales. "But then [Keeso] came to me and said, 'Hey, I've got another one of these, and it's just about problems you might run into in a small town.'"

It was a simple setup. Two guys on a farm in the fictional Ontario community of Letterkenny, reciting a list of everyday concerns: Tim Hortons closing early, drunk mowing, and the lack of all-dressed chips at KeyBank Center. Dales said, "The idea was, 'Let's do five episodes, make them two minutes each,' and we had no idea that it would take us where it did."

Now, Letterkenny is a genuine cult success. In 2016, Canadian channel Crave picked it up as a series, and it became an immediate runaway success north of the border. Its big break in the U.S. came in 2017, when a handful of episodes were screened in Austin at Fantastic Fest and quickly became one of the festival's most talked-about titles. Hulu now carries all six seasons, with season 7 debuting on Oct. 14 (Oct. 11 in Canada on Crave), and this weekend's panel at ATX Television Festival is the prelude to their first ever "Letterkenny Live!" stand-up tour of the U.S.

Yet for all that growth, the show has never veered too far from the shorts' equation of bizarre, deadpan observational humor. Most importantly, it's kept the unstoppable pace of the original, like a coyote trying to tear your screen door off its hinges when your dog's in heat (another Letterkenny problem). Sitcoms live in the delivery, and Letterkenny violates the unspoken rule that every rural show must have snail-paced dialogue. Its trademark is a breakneck delivery filled with references, rhymes, alliteration, in-jokes, and repeated riffs. The average half-hour TV script is usually around 25 pages long; Letterkenny clocks in at closer to 35 or 40. In an era when TV shows see the classic half-hour and hourlong slots as guides, not rules (like Game of Thrones season 8's episodes running anywhere from 54 to 82 minutes), Letterkenny crams the script into the half-hour format. "If you didn't go as fast as you humanly could," Dales said, "we'd end up having a 40-minute show, and no one wants to watch a 40-minute show with slow jokes."

For Dales, that signature pace is a sign of Keeso's trust in the fan base – "You don't have to baby an audience. You don't have to dumb it down so everyone gets it immediately" – and in his cast. "If you're the person slowing things down and you're not getting those jokes in, you're the weak link. You've got to speed it up. So for me, I want to make sure those jokes are delivered in the appropriate amount of time, because there's huge comedy in that fast, rapid-fire dialogue."

Austin Chronicle: Where did Daryl come from, in all his glorious dimness, and how did he change from the shorts to the show?

Nathan Dales: Even in the shorts, Wayne was going to always be the guy that Daryl was going to follow, and Daryl came from the idea of growing up, having a best friend, and doing all the things that you do growing up. Having somebody you can do everything with. You can make fun of each other, you can have a good laugh, and you can talk about anything. The idea that the two of them would spend all their time together shooting the shit and having each other's backs for everything. Have each other's backs talking about ladies, have each other's backs if you get into a dust-up. That's a very sweet way that comes across from Daryl. He's got a lot of loyalty.

AC: And he's not the sharpest tool in the box.

AC: And if there wasn't a Wayne around, he would be in endless trouble.

ND: He would be knee-deep in sheep shit all day long. A hundred percent he would be. That works, that Daryl gets to be more himself because he knows that he has Wayne and the others as a backup, and they're going to check him. They're going to tell him, "Well, that was stupid." That lends itself to him being able to ask his weird questions and use sunscreen as cologne. Because he's got those best friends, he's got that loyalty from everybody, that lets him be himself. He's very much a thinker, and he would describe himself as a philosopher or a philosophical type of a person, but I think he would be incorrect.

AC: For all the Canadianisms, like the feud between the Hicks and the Quebecois, it's still been accepted internationally.

ND: Part of that is that – just speaking about the Quebecois thing – it's funny because Ontario and Quebec geographically are close to each other; they actually border each other. It doesn't necessarily need to be the Quebecois versus the English people, it's just having pride for who you are – for not really any good reason, but because of a built-in distrust of your neighbors, who you think you're better than as a group of people. That's why I think it translates so well to the U.S., because everybody has that. "Oh, he's from there? I've never met him but I bet he's an asshole." Not everybody gets the French and English aspect, and they may not know where Quebec is, but it's relatable.

AC: Having grown up in a farming community, what Letterkenny gets is that there's often this kind of accidental rural progressivism based on nobody really caring what their neighbors do on their side of the fence.

ND: You're 100 percent right there. One of my favorite quotes is, "Not my pig, not my farm." Not my problem, not my problem. "We're going to talk about the things that matter to us, and if you're mowing your lawn a way that I don't like it being mowed, I don't care, it's not my fucking lawn. You mow it the way you want to. You're going to live in your world, and we're going to live in ours – but I happen to think that my world is just a little bit more important, so I'm going to think about it more."

Within a small town or a small city, it does create an even smaller town – say, at the produce stand. The only problems that matter to us are the problems that are right in front of us, that we're either going to try and fix or go, "Fuck it, I don't care."

AC: That's reflected in the fact that when the produce stand burns down, that's a major plot driver for the hicks; but [local pub] MoDean's keeps burning down, and no one seems to care. What are we on now? MoDean's III or IV?

ND: I think it's III. And I wouldn't put it solely on Gail [MoDean's owner, played by Lisa Codrington], but she does like to drink, and that could explain how and why MoDean's burns down. I like to attribute it to, 'We've been having too much fun after hours there, and somebody forgot to use the proper fire extinguisher,' but it keeps going down. There's no malicious burning of MoDean's. It's more of a badge of honor.

AC: The show knew what it was from very early on, but there've been a few changes, like the disappearance of the Christians and the church youth group.

ND: The Christians were going to be a big part of it, [but] I really like that it turned from a group of people to Glen [played by writer/director/producer Jacob Tierney] as the pastor becoming – using a baseball reference here – a utility player. If there's something kind of odd to be done, Glen is the man for the job. Jacob is such a great performer, and he has taken that there's an undertone of his religious beliefs, but he really gets to play all these great different parts, from starting new businesses to having a Christian Rock band. He does everything.

Another big difference: I thought that Hell would have to freeze over before there would be a romantic interest for Daryl, and then all of a sudden we get Kim Cloutier [as Quebecois Anik], who gets to be Daryl's sweetie. That's another difference that I didn't think was ever going to happen.