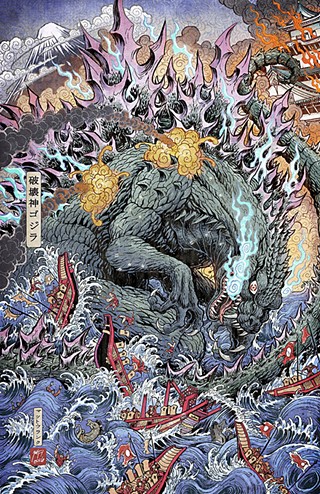 The cover to Godzilla: Rage Against Time #1 by Austin artist Matt Frank

All hail the king! Next weekend, Godzilla: King of the Monsters stomps into screens across the globe, but for fans of his rubber suit origins, the Stateside will host a special screening of the original 1954 Gojira as part of the Paramount Summer Classic Film Series. Suitable for the reigning monarch of kaiju cinema, the Austin branch of Japanese bookstore Kinokuniya is hosting a special pop-up store of exclusive Godzilla merchandise from Toho, the studio behind the giant beast and his assorted massive friends and enemies. Yet the rampage doesn't stop there: This weekend, local comic artist Matt Frank will be there for a special artist signing alongside concept artist Kevin Chin, T-shirt master Mike Keller, and the fusion creations of printmaking duo Half-Human (aka siblings Eric & Vincent Torres).

In the realm of giant monster movies, Frank is Darwin. Nicknamed the Kaiju King, he's achieved the rarest of honors for an American working in the world of giant monsters – his comic, Godzilla: Rage Across Time (which he illustrated and co-wrote), has just been translated and published in Japan. After Godzilla himself, Frank's favorite creature from Toho's menagerie is Varan the Unbelievable, "a giant reptile with the singularly unique ability to fly like a giant flying squirrel." Yet no monster has achieved the universal appeal of the King of the Monsters himself. "I've often said that Godzilla is a Western-style monster depicted through a Japanese lens."

For 55 years, Godzilla has overcome cultural differences to stride the world. Western audiences, Frank said, "tend to view monsters as merely obstacles for the 'heroes' to overcome." By contrast, "The 'strange beasts' of Japan range from allegorical destroyers of worlds to fully fleshed-out characters with wants and needs, and are often depicted as creatures with their own sense of morality, or even positioned as 'beyond' mortal concepts of justice."

The upcoming Godzilla: King of the Monsters hatches the first Western cinematic version of a uniquely Japanese icon: Mothra. Where most kaiju are either malevolent or simply ambivalent toward tiny, scurrying humanity, Mothra is portrayed as a benevolent protector – the Queen of the Monsters. She is beloved in Japan (she had her own successful movie in 1961, three years before the inevitable great clash in Mothra vs. Godzilla – and note that she got top billing) but has never seen the same international adoration as her scaly, atomic-fire-breathing counterpart. Frank said, "Most Westerners see her as a ridiculous creation, utterly pointless or stupidly made, because the Western definition of a monster is something scary, fierce, and horrible. Mothra is rarely these things; she is delicate and beautiful, a defender of natural balance."

However, for her American debut, Frank said that the new Mothra "[has] been redesigned to appear fiercer and more dangerous-looking." Yet with her regal colors, she is still "a counterbalance to the snarling reptilian beasts."

A version of this article appeared in print on May 24, 2019 with the headline: Here Be Monsters