Black, white, and red all over 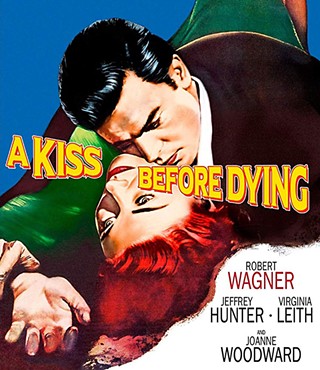 In 1998, journalist Eddie Muller wrote Dark City: The Lost World of Film Noir. Bringing a more populist approach to the study of film noir and expanding the canon from the obvious to the obscure, the success of Dark City would launch Muller to the heights of noir in popular culture, including several additional books and an ongoing role as the host of the Turner Classic Movies series, Noir Alley.

But the first step was to get these movies seen. "The American Cinematheque in Hollywood thought it would be a great idea to turn the whole book into a film festival," Muller explained, noting that the series quickly evolved into a touring festival and an organization dedicated to the preservation and distribution of this genre of cinema. "I said we should really start a nonprofit foundation to find and restore a lot of these movies that I wanted to show, because the 35mm prints no longer existed."

Thus, the Film Noir Foundation was born. Muller describes his role there as part scholar and part showman, and the most significant victory of this year's Noir City Austin certainly belongs in the latter category. Not only will the festival screen a rare 35mm print of Don Siegel's Private Hell 36 – on loan from the British Film Institute as there are no screenable prints in the United States – it will also include a title made possible by Muller's tenacity alone: a restoration of William Dieterle's journalists-versus-the-mob drama, The Turning Point. "I've been badgering Paramount that there are movies in their archives that have never been seen on Blu-ray or DVD. Paramount made that new digital version of the film for me basically because I bugged them for so many years about it."

With a focus on films of the 1950s, Muller said, "I don't think that this is the festival for people who want a definitive explanation of what 1940s classic Double Indemnity-style film noir is." Consider Gerd Oswald's A Kiss Before Dying, a wide-screen color feature that focuses on a man trying to murder his way out of an unwanted pregnancy. While it has few of the visual and thematic elements associated with classic noir – no gangsters, no rain, no chiaroscuro lighting – it unquestionably offers as bleak a perspective on postwar America as any Bogart thriller. Muller said, "It might be the most noir-ish film that we're showing this weekend."

But even the films available through services like the Criterion Channel deserve their moment with a theatrical audience. In all of his travels around the world with the Noir City program, Muller often hears that these films take on new meaning for the viewers on an arthouse screen. "I'm always amused when I read reviews from back in the day where they're so jaundiced because they were seeing movies all the time on big screens in movie theaters," he said with a chuckle. Not so with his Noir City audiences. "Everything immediately gets an extra star when you see it in a brand new, pristine 35mm print on a big screen." In other words? You won't be disappointed, fedoras or no.