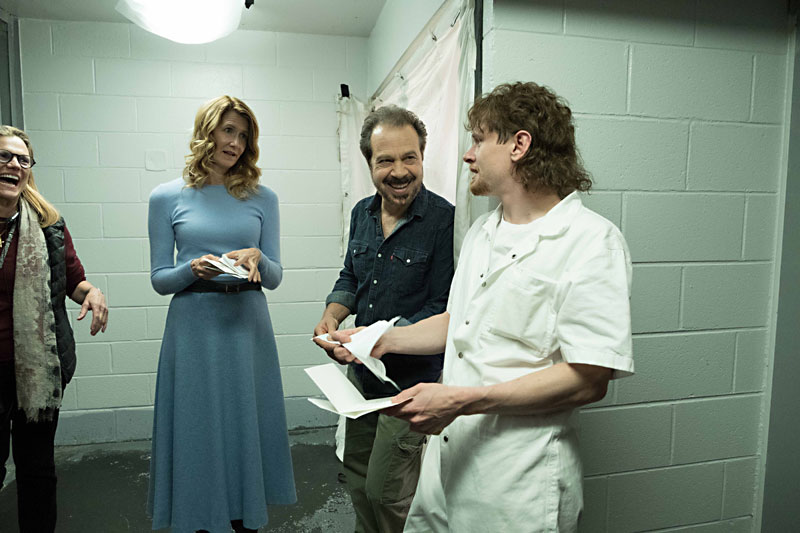 On Feb. 17, 2004, Cameron Todd Willingham was executed by the state of Texas for a triple homicide that never happened. There was no Hollywood happy ending, no last-minute call from the governor, no final sense of grace. Willingham died alone, angry, betrayed, and that's a moment caught in its full heartrending despair in Trial by Fire, the dramatic retelling of the prison friendship between the condemned Willingham and teacher-turned-activist Elizabeth Gilbert. Director Edward Zwick said, "There were all sorts of conversations among friends of mine, who saw the movie and said, 'Do you have to do that because it mitigates so much of the growth?' 'Yeah, I have to ... I had a determination to be as truthful as one can.'"

Willingham's original trial barely raised a blip on the radar at the time. After all, he was a no-hope petty criminal in Corsicana, Texas, who set fire to his house and murdered his three small children. It wasn't until after his execution, when the Texas media and the Chicago Tribune started examining the evidence, that the state's reasoning fell apart. However, it wasn't until 2009, and a story for The New Yorker by David Grann, that most people – including Oscar winner Zwick – found out about the grotesque miscarriage of justice. When he read it, Zwick (director of Courage Under Fire and Blood Diamond) said, "I realized that it contained the entire catalog of what is wrong about the criminal justice system. The withholding of exculpatory evidence, the junk science, the use of snitches in return for reduced sentences, the recanting of testimony – all of it."

“I said to my daughter, ‘I’m sorry that I have to be the one that shows you what a shitty world this is.’”

However, what really drew him in was the relationship between Willingham and Gilbert, a recently widowed Houston schoolteacher who became his biggest advocate. Their relationship, re-created by British actor Jack O'Connell and multi-time Oscar nominee and Emmy winner Laura Dern, "was in very stark juxtaposition to the unfairness and the cruelty." Not that the script ever turns from the injustice, such as how Gilbert responds when her daughter confronts her about how much time and energy she's sinking into a convict with no hope. That's a moment drawn from Zwick's own life and the tough side of parenting: "I said to my daughter, 'I'm sorry that I have to be the one that shows you what a shitty world this is.'"

Working from Grann's files, Zwick and screenwriter Geoffrey Fletcher knew the outline of the Willingham story before they gained access to another treasure trove: Willingham's letters to Gilbert, which she shared with Zwick and Dern. They didn't provide some bombshell revelation that changed the narrative, but provided light and shade to Willingham. Reading his own words allowed Zwick to dispense with the fake drama of a virtuous man caught in the cogs of injustice, or a predictable mystery of whether Willingham did or did not do it. Instead, his Willingham isn't innocent, but he's innocent of killing his babies. Zwick said, "Had it been a story about somebody who was obviously sympathetic, it very quickly could have degenerated into sentimentality, and I wanted it to keep its more neutral, more flinty edge. Sentimentality is something audiences guard against, and yet this had the exact opposite effect." 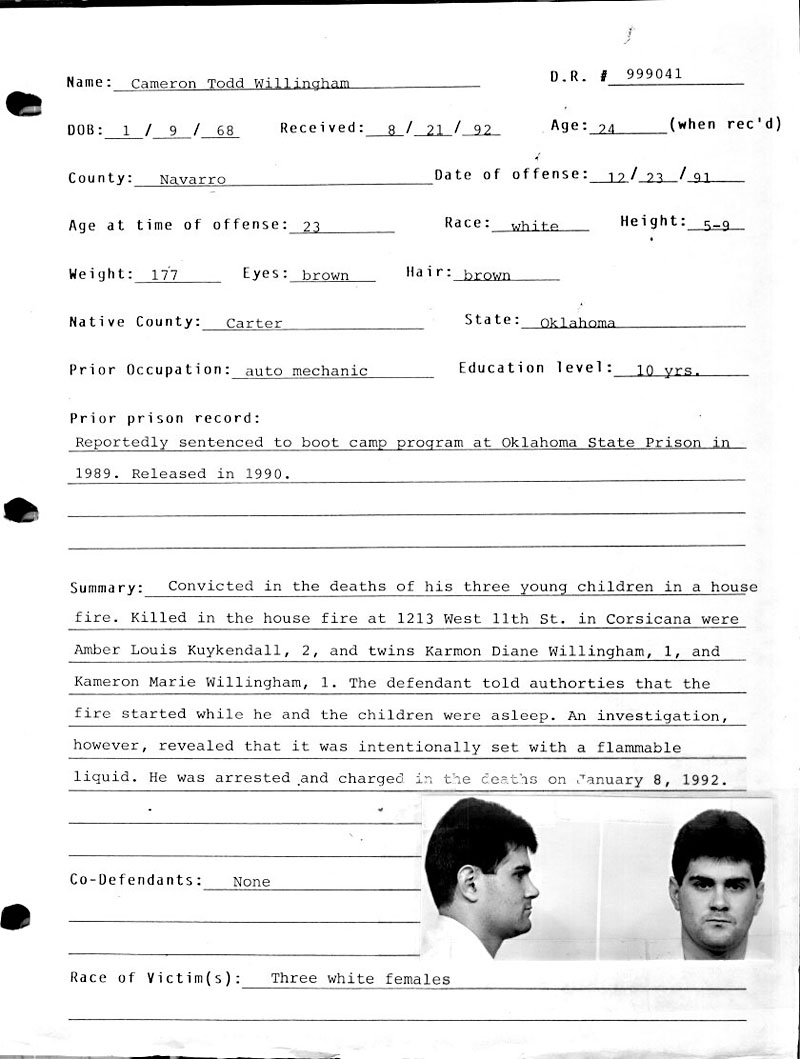 Much of that tone is transmitted by O'Connell: Zwick knew his work from the original British version of Skins and saw him as "the antithesis of the self-loving actor ... I just sense a volatility in him being reactive and unpredictable, that willingness to embrace those darker colors and not have to cravenly beg for an audience's sympathy, because he understands that the story will do that, if you just play the moments." After all, Willingham wasn't a monster, but he was still the neighborhood bad boy, and he could be charming – as reflected in a scene where he almost convinces Gilbert to twirl for him behind the visiting room glass. It was no secret that Willingham had his manipulative streak, Zwick said. "He was having an affair with the neighbor at the same time that he was fucking his wife, and there was someone else [too]."

Yet his writings also showed a man drowning in the loss of his family, who felt guilt even if he wasn't guilty, "The conversations in the letters also got to be about books and God. It gave us ideas for scenes."

Making Willingham rounded and truthful was only half of the equation, because without a real version of Gilbert, it would mean nothing. Zwick said he and Dern were very aware that her character could fall into one of two cliches – either the "Hollywood crusader" or the "nurturing mother-bird" figure – and credited the actress for creating a character that avoided these cliches. "Without her," he said, "we may have had the inclination to fall into those traps." Dern found she had much in common with Gilbert: similar ages, both raising children alone, and both engaged as activists, often for "losing causes," said Zwick. "But Laura got to know Liz, and also realized a part of herself that she could invest – that she had a certain amount of wisdom, a certain amount of self-mockery, a certain fierceness."

The Willingham case has been told onscreen before, in documentaries like PBS' Frontline and the 2011 SXSW award-winning feature Incendiary: The Willingham Case. Yet no amount of retelling will bring him back. Plus, after 15 years of seemingly deliberate prevarication by the state of Texas and a determined effort to make sure that the exculpatory evidence never gets a real, fair hearing, it seems unlikely that there will ever be justice for Cameron Todd Willingham. But that's never really been the point. There's a key moment in the appeals process when a defense attorney tells Gilbert that it's not about him. The die was cast. The state was going to kill him. Instead, it was about the next innocent person on death row, or the one after that.

For Zwick, that makes a retelling of Willingham's tragedy more timely than ever. With a seemingly endless playlist of police brutality and abuses of power, more people than ever see that "fairness and justice is not necessarily the first impulse of the system." Yet while that realization can be soul-crushing, Zwick sees hope in the changing nature of true-crime culture, as indicated through the success of Making a Murderer and the Serial podcast. "The trope used to be crime and punishment. But I think there's a new one that has to do with crime and innocence."

Trial by Fire is in theatres now. For more on the junk science that murdered Cameron Todd Willingham, read “Are Fire Marshals Shirking Their Duty?” Oct. 22, 2010.

A version of this article appeared in print on May 17, 2019 with the headline: Lied to Death