From Fredericksburg to the future Welcome to year 10 of the small yet mighty Hill Country Film Festival. Executive Director Chad Mathews calls the Fredericksburg-based celebration of cinema a "destination-weekend getaway-film festival" offering cool movies in a cool town. "People that go to film festivals are curious beings," Mathews said. "They wanna go see things and experience things. When you get out of the theatre, you're in a place that has a lot of options. That's great to go explore and do something while you're there."

Mathews described Hill Country Film Festival as less stressful and more intimate than larger affairs, such as Sundance and SXSW, while still providing the opportunity to see quality work and talk with people in the industry. For the filmmakers themselves, they get a chance to show off and enjoy their movie without the pressure of trying to find a distributor.

"I like seeing our out-of-town filmmakers come into Fredericksburg and really let their hair down," Mathews said. "That shield evaporates and they really open up. It's down-home, it's fun, and you don't always get that when you're at a bigger, industry festival."

This year, with 15 feature films and 82 shorts, there's more programming than ever, with a little something for everyone. Panels will feature conversations with actresses, directors, and technology professionals (specifically, how virtual and augmented reality are affecting the industry). "We're looking for a lineup that is diverse," Mathews said. "We want our audience members to have an experience where they can pick and choose films that they particularly like and wanna see, but then offer them films that are gonna be a little bit more challenging."

The festival's grown a lot in the past decade, and this year features some notable nods to that history. Opening night crime thriller Cruel Hearts is directed by Paul Osborne, who's credited with having the festival's very first screening back in 2010 with his life-in-indie-film documentary Official Rejection. Anna Margaret Hollyman took home the best actress award at the inaugural fest for Liliana Greenfield-Sanders' short "Adelaide," and now she returns as the lead in historical comedy Sister Aimee. For Mathews, the festival is a way to feel connected to the industry by championing filmmakers and their content. He finds it rewarding to see that those who came to the festival years ago with short films are now working on features and collaborating with people they met in Fredericksburg. "When you see that happening, you feel like you're contributing," Mathews said. "I might not be making movies or acting, but I'm still a part of this. I still am helping that next generation of filmmakers move forward, and that's what's been really extraordinary."

Tickets and info at www.hillcountryff.com. 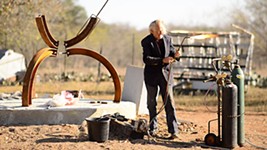