Now Streaming in Austin: Dark Side of the Ring 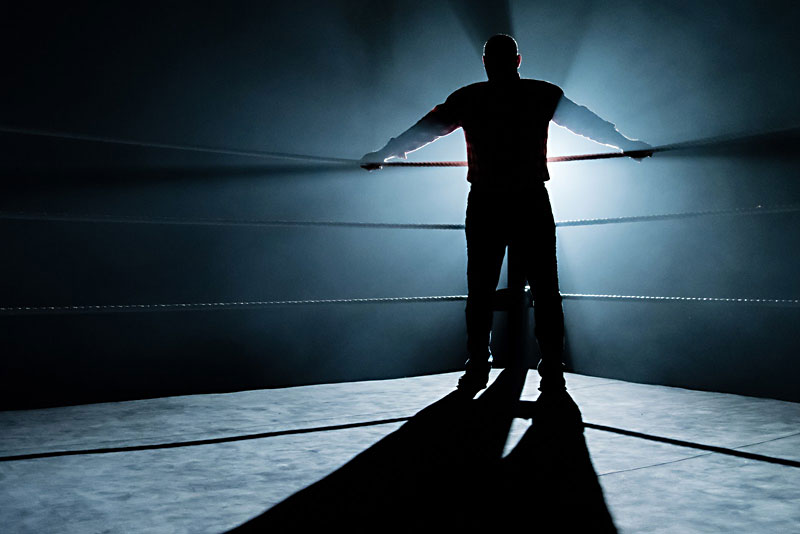 The Dark Side of the Ring

Professional wrestling is an art of two aspects: There're good guys, known as faces, and there are bad guys, or heels. They're fighting, landing clubbing blows and dropping each other from perilous heights, but they're still protecting each other. The Dark Side of the Ring, the new documentary series for Viceland, lives in a strange space between truth and fiction that wrestlers called kayfabe. It's an old carnival term, where the in-ring fantasy melds into reality and the line between wrestling performer and wrestling character blurs – sometimes to deadly consequences.

Series producer Evan Husney became part of the Vice empire after leaving his post as creative director of Drafthouse Films (which he co-founded with Alamo Drafthouse CEO Tim League). He and director Jason Eisener – a fellow wrestling fan – created the series after hearing about the mysterious 1988 death of brawling legend Bruiser Brody, who walked into a locker room in Puerto Rico and never walked out. Husney said, "We knew that it was the perfect entry point, and it checked all these amazing boxes. You have the wrestling world when it was much more protected, and then you put a real life murder story inside of a kayfabe locker room. It becomes a fascinating story of piecing together what's real, what's fake, and how the two worlds collided that night."

“The Montreal Screwjob, although it’s been told so many times, it’s kind of like the Lynyrd Skynyrd ‘Freebird’ track on your compilation – you’ve got to have it.”

The latest episode pulls back the curtain further than ever before on one of the greatest scandals in pro-wrestling history: The Montreal Screwjob, the infamous match at WWF's 1997 Survivor Series pay-per-view where owner Vince McMahon betrayed his outgoing champion, Bret Hart, and wrecked the concept of kayfabe by putting company politics in the ring.. It seemed that, after 22 years, a feature documentary (Wrestling With Shadows) and a battle royale's worth of "shoot" interviews, there would be nothing left to say. However, Husney and Eisener managed to get Jim Cornette and Vince Russo – then colleagues on the booking team, now life-long enemies – to make some shocking revelations.

Austin Chronicle: I honestly didn't think there was anything new to say about Montreal, but there ere facts I'd never heard before ...

Evan Husney: That's all new. That's never been out there.

AC: So considering that Russo and Cornette have told that story a thousand times, how did you get something new out of them?

EH: That was totally by accident. We wanted Cornette's voice in that episode. We're huge fans, we've always been fans, and he's just a really entertaining person to listen to, and we knew that he'd be amazing on camera, literally in anything. The whole reason we wanted to get him involved is to give that very purist perspective that he has on wrestling. He's a purist, and especially when you're talking about the WWE transitioning from the old-school wrestling to more of sports entertainment, which is something he's not in favor of usually. So he bridges the gap.

But when we showed up at his house, and we're all getting to know each other, that moment when he shows up on camera and says, "I haven't really gone this far with the story before," that was new to us with him saying it. It was like we caught him at this perfect moment in his life, where he doesn't really venture out, and he's not trying – I presume, I wouldn't want to put words into his mouth – but it doesn't seem like he's trying to get back into the WWE. He doesn't want to leave [Louisville], and he want, "This opportunity came along at this point in my life, where I'm going to personally admit where this thing came from."

I think that he appreciated that our hearts were in the right place, and that we were fans, and that we wanted to tell this story, and that we had an interesting take. We didn't just want the Montreal story to be a listing of facts. You can go and you can find that information you can find a sterile listing of the dates and the times and the contract details, but with this episode in particular what's fascinating to us about it is that the lore and the fiction about it are just as important as the facts.

The Montreal Screwjob, although it's been told so many times, it's kind of like the Lynyrd Skynyrd "Freebird" track on your compilation – you've got to have it. It's a hit story, but that being said, it's the perfect entry point for someone who doesn't understand how behind-the-scenes works, how a match is determined, how a champion is made, what it means to be a champion, and the stakes of all of that. So that, for us, is a great way to get people interested in the behind-the-scenes politics. Otherwise they'd probably think, 'Oh, those guys just go out there and hit each other,' and there's so much more to it than that.

AC: How did you pick the stories you did for this season? Because there's a mixture of the ones everyone knows, like Montreal, and then the ones that are known to wrestling fans, like the tragedy of the Von Erich family, and then you add some that are really deep in the history books, like Gino Hernandez.

EH: Obviously, Jason and I being passionate wrestling fans, the list of stories we wanted to tell was super-long, so it was about whittling it down. The way that we approached the series from the very beginning was that we wanted to make each of these stories accessible to a non-wrestling audience, and we wanted it to play as something that someone who's a hardcore fan would be satisfied watching, but also someone who's a total newcomer, who has even someone who has written off wrestling and isn't interested at all, we wanted to hook them with a human interest story.

The over-arching theme that's present in each story is the blurred lines between reality and fiction in wrestling, and how that's super-singular to that world. I think that's a really interesting quality of that period of wrestling as opposed to today, because kayfabe isn't really in practice any more. But if you have the Macho Man Randy Savage and Miss Elizabeth episode, that's blurring the lines between their scripted relationship and their off-screen marriage, and where those two intersect.

The other stories, we wanted to have a mixture of things that you and I would find extremely fascinating as hardcore fans, like, wow, I didn't know Gino Hernandez, what kind of character was he, and oh my god, this crazy murder conspiracy about him. So we wanted to have a well-rounded season that would be a perfect entry point for non-fans, and also give the hardcore fans something to really dig into. And thankfully, each episode has some new information on a story that's maybe been played out before.

AC: Shoot interviews, where wrestlers talk about backstage life, are a cottage industry, so you know that you'll get people to talk. But how do you find something new to say?

EH: That was part of the pitch. We really wanted to elevate these stories, and give them a prestige documentary-style treatment. Jason and I are huge Errol Morris marks. The Thin Blue Line is so wonderfully put together, and the noir, interpretive style – he's the guy that set the bar for that. So that was the idea, to fuse The Thin Blue Line with the Bruiser Brody story, and a little bit of Unsolved Mysteries, because we love that show too.