Josh Frank Writes Himself Into the History of the Marx Bros.

There ain't no sanity clause When Josh Frank (the man behind Austin's Blue Starlite Mini Urban Drive-In) was a kid in Houston, late at night he'd sneak out of bed and turn on the TV. A siren call had lured him there – or rather, a honked car horn, the blaring trademark blast of the Marx Bros. Anytime there was a marathon of their chaotic cinematic creations, the young Frank would be there for every raised eyebrow, every duck walk, every mirror gag, every pricking of the bubble of pomposity. Frank reminisced, "I'd record them each time on VHS, in hopes of cutting as many commercials out perfectly as I could so I wouldn't hear the guy scream, 'Mattress Furniture will SAVE YOU MONEY!' for the thousandth time."

From that childhood obsession, now he has his own place in Marx Bros. history, having resurrected one of the great lost Marx projects, Giraffes on Horseback Salad, as a graphic novel (see our review of the adaptation in our March 22 issue). His last book – The Good Inn, a collaboration with the Pixies' frontman Frank Black – was inspired in part by the story behind a 1908 short called "A L'Écu d'Or ou la Bonne Auberge," infamous as the first known porno flick. After that, he said, "I was obsessed with lost unmade movies, and how I could bring some of the greats to life in a new way." As a Marx fan, he was inevitably drawn to Giraffes on Horseback Salad, an abandoned surrealist liaison between the American comedy greats and Salvador Dalí. Unfilmed and long lost, the pre-production plans re-emerged in 1996, stuffed into Dalí's papers. However, it needed a lot of work before finally making its printed debut. "There wasn't a script," Frank said. "It was 80 pages of handwritten notes and a seven- page treatment that William Goldman passed on when Harpo and Dalí pitched it. But I was in heaven seeing how much there was to work with."

Last month, at the beginning of the publicity tour for the book, he screened 1933's Duck Soup: Now he's back home for A Night at the Opera. Well, technically, a night at AFS Cinema screening 1935's A Night at the Opera. The two films marked a huge transition for the music hall megastars: Duck Soup was their last movie for Paramount, and their last with brother Zeppo before he quit the act to become a theatrical agent. Opera was their first as a trio, and the beginning of a five-film run at Metro-Goldwyn-Mayer (with a one-movie diversion to RKO). It also marked a change in their style of comedy: While shifty business manager Otis B. Driftwood (Groucho), bombastic bumbler Fiorello (Chico), and all-purpose anarchy dispenser Tomasso (Harpo) were receptacles for the established Marx brand, MGM boss Irving Thalberg helped move them from morally ambivalent clowns to hilarious antiheroes. For Frank, the two films stand alongside 1930's Animal Crackers as "the greatest Marx movies. ... Duck Soup explores their surrealist tendencies and Opera shows the heart that was behind all their mayhem and anarchy."

A Night at the Opera with an introduction by Josh Frank. Monday, April 8, 7pm. AFS Cinema, 6406 N. I-35. Tickets and info at www.austinfilm.org. 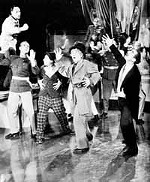 Duck Soup
A sublime, Surrealist comedy from the Marx Brothers, in which Groucho plays the new dictator-for-life of tiny Freedonia who declares war on a whim on neighboring Sylvania.