Guns, drugs, and laughs in this microbudget thriller "I hope that Tejano helps people see through their own biases." Writer/director David Blue Garcia (in front of the Tejano Monument on the Texas State Capitol grounds) on his new film and its new take on cross-border life. (Photo by David Brendan Hall)

Ever since the Red Scare, movies and lawmakers have been like oil and water, and most of the time filmmakers like to steer clear of the attention of legislators. It's been a different story for Austin-based director David Blue Garcia: On March 8, he was honored as the subject of a Texas House Resolution, HR 176, authored by Rep. Celia Israel, D-Austin, for his new film Tejano.

The official plot description (and it doesn't get much more official than being on the state Legislature's records) says that "Tejano is a Spanish-language thriller that tells the story of a young ranch hand who, desperate to raise money for his sick grandfather, finds himself caught up in drug trafficking along the border."

But that brief description doesn't capture the ups, downs, twists, and turns of Tejano, a thriller that is by turns lyrical, tragic, brutal, political, and hysterical. In it, Patrick Mackie plays Javi, a blue-eyed Latino who regularly travels over to Mexico to see his girlfriend (Mayra Leal) with plans to eventually get her to the U.S. However, plans unravel, allowing Garcia to discuss border politics, border identity, border crime – and, of course, the absurdity of the border wall.

The genesis of the film was less a script "and more an idea for a script," said Garcia. "I read a story about a man who smuggled cocaine in a cast on his leg, and when he was captured by police at the airport, they discovered that, underneath the drugs, his leg was actually broken. So I thought this was an interesting idea – why would he actually break his leg to smuggle the drugs? What's the backstory?" Then there was another torn-from-the-headlines tale of a rancher in Mexico who took matters into his own hands when drug gangs tried to kick him off his property. "This man defended his home against the cartels with a hunting rifle, until they finally overtook him."

He combined these dramatic anecdotes with his own personal experiences growing up in Harlingen, and with his longtime collaborator Kyle Bogart, they developed the script into "a really exciting genre screenplay."

It's those personal experiences that give Tejano much of its most complicated depth. Growing up in the Rio Grande Valley, Garcia said, "I regarded it as a transitional place between the U.S. and Mexico. It felt like you're between worlds, and we wanted Javi to embody that." For Garcia, Javi is that liminal space personified – seen as Mexican by his American friends, but a güero south of the border. "He's tied to the Valley, and to the land, and to his Mexican grandfather. He's got a Mexican girlfriend and crosses over to Mexico to buy drugs from her pharmacy, and he speaks fluent Spanish. At the same time, at the beginning of the movie, he's yelling at immigrants who have cut his fence, because they've cost him extra work. So what is he? Whose side is he really on?"

Garcia has even talked to some viewers who have had real problems getting past the fact that Javi is tall and light-skinned – much like the director and like Mackie, who grew up in McAllen – and whether that makes him "Hispanic enough," as if that's some hard and fast standard. He said, "I hope that Tejano helps people see through their own biases."

The depiction of border life and the simple fact that Garcia crafted this microbudget thriller on the ground in the Rio Grande Valley are part of what caught the eyes of lawmakers. However, there's another legislative connection. Behind his thick beard and farm-worn hands, eagle-eyed capitol regulars may recognize Javi's grandfather, Arturo. While he's billed as Roland Uribe, that's just his stage name, and he's better known as former Democratic state Senator Hector Uribe. However, this isn't some weird dabbling: Uribe's been an actor since 2004, when he appeared as Mexican Colonel Francisco Duque in The Alamo. The politician and the filmmaker met on the set of The Bystander Theory in 2013, when Uribe played a sheriff and Garcia was the film's cinematographer. "He's got these two careers going on in parallel," said Garcia, "and sometimes people don't realize that he's been a state senator." When Garcia and Bogart wrote the script, Garcia said, "[Uribe] was one of the guys that came to mind, and I cast him immediately."

What was important to Garcia was creating what he called "regional authenticity," and many of the realities he portrays – border walls, racism, cartel violence, cross-border life – predate the current political firestorm around those issues. He and Bogart actually started writing the script in 2013, shot the film in 2015, and the stretch of border fencing he uses for several pivotal scenes (those signature metal slats of White House presentations) had actually been erected in 2006 – "Well before Trump was even running for the presidency," said Garcia. However, he added, "Now that President Trump has brought the border wall into the national spotlight so much, that scene has much more resonance than it ever did with an audience before, and has a different kind of meaning to it."

And that's real border wall, the kind that has become a political lightning rod, that appears in the film. However, it's more near the border than actually on the border. "The border wall isn't in Mexico, it's in Texas, so even if you go to the other side of the wall, you're still in Texas," said Garcia. The production simply rented some private property with a section of the barrier, let the Border Patrol know what they were up to ("If you alert them that you'll be there, they'll be totally understanding and work with you"), and shot several scenes there. Again, that's part of the regional authenticity, with filming taking place along the border at a real border crossing, and even a few external sequences in Mexico, in the tiny town of Nuevo Progreso.

Garcia quickly found that the residents of the area were incredibly supportive and generous when they found out that he and his tiny crew of eight ("We couldn't even afford makeup") were making a film in their community. Suddenly, resources that were beyond their finances were being donated to the production, with friends and family putting up the cast and crew for free for the month of filming. He said, "We had access to lots of farmland for free, a lot of interesting locations for free, farm equipment, four-wheelers, guns – everybody has a gun in the Valley, so if we ever needed a prop gun, a lot of the actors had their own."

For Garcia, the fact that it's a border story made on the border makes all the difference. "It's a genre story that works in any setting," he said, "but there's an extra level of authenticity."

A version of this article appeared in print on March 29, 2019 with the headline: Guns, Drugs, and Laughs in the Valley 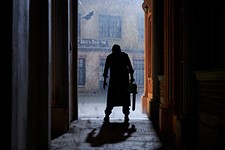