Get chipped (or don’t) at BDYHAX 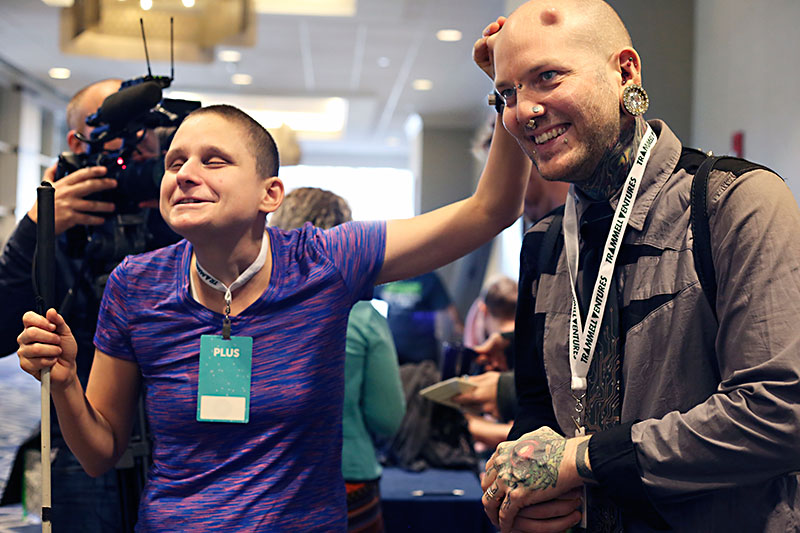 Implantable technology, self-surgery, nootropics. ... Are we not in Black Mirror?

No, fortunately or unfortunately, depending on who you ask at BDYHAX. Pronounced "body hacks," it's Austin's homegrown human augmentation conference. Now in its fourth year, the annual conference seeks to bring together bioartists, tech enthusiasts, citizen scientists, and researchers from around the world for a weekend of panels and workshops on the present and future of human augmentative technologies.

Co-founded by Dustin Trammell and Trevor Goodman, the event derives its name from the practice of body hacking, an umbrella term most likely first coined in 2005. Yet as Goodman sees it, body hacking isn't anything new, but has its roots before recorded history. "We've done tattoos and piercings for aesthetic purposes, and we've invented things that probably would have been medicine in lots of different cultures and times. So from that perspective, we've always been body hacking."

Today, the body hacking community is a niche yet vast faction, with BDYHAX attracting everyone from neuroscientists to DIY garage scientists, nicknamed "grinders." "When we started this event, there wasn't really anybody who was saying, 'Hey, all you people in different industries and different verticals are really working on the same types of technologies and you're dealing with the same cultural problems,'" recalled Goodman. "A lot of what we're doing is putting people together from different communities and areas that would not normally be there."

Goodman is adamant: BDYHAX ain't no tech-of-tomorrow rodeo. "We're not a futurism show, so what we're talking about is technology and techniques and things that are happening right now," he explained. Highlights this weekend include an implanted Linux computer (i.e., inside a warm, living human body) and a presentation by Samantha Payne, co-founder of Open Bionics, a robotics company specializing in 3-D-printed bionic limbs.

That being said, Goodman added it's not just about scientific know-how but also "the social, political, ethical, and artistic repercussions of the technology." At the heart of BDYHAX's interpretation of body hacking lies a DIY ethos, a guiding principle that's also infused with bodily autonomy. "Rather than trying to get everybody to some fictitious optimal human state," said Goodman, "we want people to be able to make informed choices about their own bodies." Without bodily autonomy, coercion in the workplace, for example, might look like an employer requiring employees to receive an implanted chip rather than a security badge, or, as Goodman posits, perhaps working in a competitive sales office where your co-workers rely on "smart drugs" like modafinil to improve performance. "If you can't keep your job and can't compete without taking a cognitive enhancement drug, are you being coerced? Is that a thing that, culturally, we should be aware of?"

There's a rising concern that this will lead to a new wave of tech haves and have-nots. To avoid that divided future, Goodman sees open access to information and technology as paramount, and maybe even some exploration outside of the exam room. "I think self-experimentation is one the most ethical human experimentations that you can do." Already, he said, people in the body hacking community are rejecting profit-driven Big Pharma and industrialized medicine and coming together to solve their own problems – people such as BDYHAX 2018 speaker Dana Lewis, who created an open-source artificial pancreas technology that automatically manages insulin levels for Type 1 diabetes.

Goodman said, "The medical industry has worked really hard to get to the place that they are at right now, and so I do think that they're so tied up in their lawyers and their insurance that they don't want to touch this stuff because it's too risky.

"But the problem is, it's coming, whether they like it or not."