Our interview with the filmmaker and programmer

"Love and the Epiphanists," the latest film from Scott Stark, co-founder of Experimental Response Cinema and subject of a farewell retrospective this Sunday at Austin Film Society

There are many pleasures to derive from French filmmaker Robert Bresson's seminal 1975 book, Notes on the Cinematographer, but it's his binary delineation of cinema that has always stayed with me. There are two types of films, he writes: "those that employ the resources of the theater (actors, direction, etc....) and use the camera in order to reproduce; [and] those that employ the resources of cinematography and use the camera to create." Austin filmmaker and programmer Scott Stark has wholly embraced the latter. Co-founder of both Austin Film Society's Avant Cinema series and Experimental Response Cinema, Stark has brought many cutting-edge visions to Austin, while his own work is concerned with manipulating and appropriating various found footage to examine the language of cinema. As Stark puts it, he's "chart[ing] the possibility of a pre-cinema experience, one that might have evolved had not narrative and commerce been cinema's prevailing motivational forces."

No film of his better encapsulates his technique than his latest film, "Love and the Epiphanists," the headliner in Austin Film Society's showcase of Stark's work on the eve of his permanent relocation to San Francisco. The filmmaker blends together repurposed Hollywood trailers with treatises on the River Thames and pigs to tell a postapocalyptic tale of Tonya and Shane, living in a world stricken by climate upheaval.

Accompanying Stark's new film is a curated trio of his early works: the ominous "Angel Beach"; the all-singing, all-kidnapping "Is It True What They Say"; and an often hilarious examination of celebrity activism in "More Than Meets the Eye: Remaking Jane Fonda." 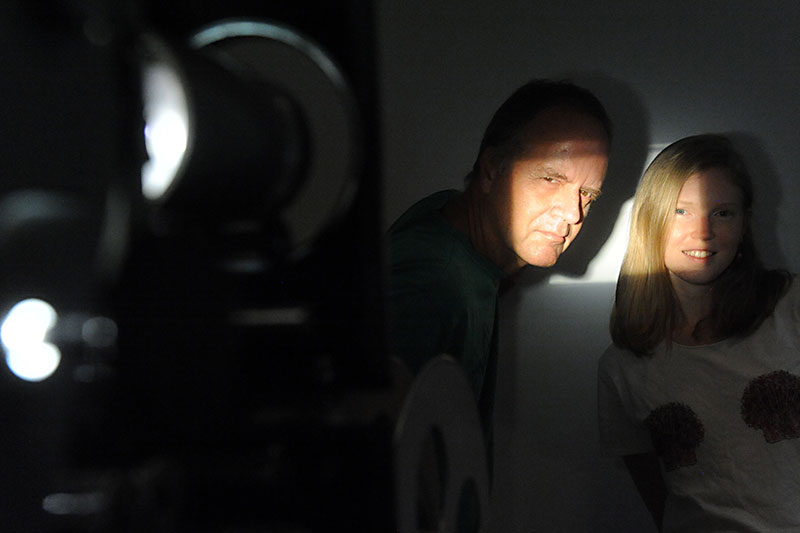 Austin Chronicle: Well, I never thought I'd have to think about the George Clooney/Nicole Kidman 1997 film The Peacemaker ever again, but here we are. Your use of recontextualizing old film trailers and videos while inserting these discourses on various topics makes for a pretty heady and entertaining brew in "Love and the Epiphanists." How did this epic come about?

Scott Stark: Well, originally, I wrote a proposal and got a grant from the Austin Film Society with a very specific narrative trajectory, but as I started working with it, I realized I had kind of backed myself into a corner. But then I realized I could bring in these other elements that had ancillary relationships, like texts from romance novels and discussing the history of waste management, so once I realized I didn't have to make it this fixed-narrative thing, it opened it up.

This project started as an omnibus of things I wanted to talk about. [One] of the inspirations was this book by Edmund Russell called War and Nature, where he compares the U.S. government and military propaganda in World War I and World War II to post-1945 insecticide research and advertising. This idea of controlling populations, both human and otherwise, fascinated me, and it fit into this fledgling narrative that often drifts to the background.

AC: And now you're moving back to the Bay Area.

SS: Well, my wife and I lived there for many years before moving to Texas, and it's a place I still feel very rooted to. I found the community very supportive and very alive. It was a good place for me. I was finding my own voice. It's been great being in Austin, and I think I helped create and establish a little bit of an experimental film community here, finding like-minded voices and people here. But I guess I kinda left my heart back there.

AC: I can't let you go without asking about the Jane Fonda film, in which you set up a TV and exercise to her videos in these public spaces as her words unfurl on the screen. When you were making that film, how much flak did you get from passersby?

SS: Well, kind of the opposite. I think I wanted to do that piece in places where I would provoke some sort of response. When you're filming something, the camera is in the process of photographing, and [in] Hollywood movies, especially, and a lot of documentaries, you're supposed to think the camera isn't really there; we're just voyeurs watching this whole thing invisibly. But I like the idea that the camera is in some way part of the process, and it's causing some kind of ripple effect on the environment. I like the fact that me and this process aren't invisible, we're actually the reality of the space of what's going on. That's always been an interest of mine: meet the camera more.

More Than Meets the Eye: The Cine-Puzzles of Scott Stark screens Sun., Feb. 3, 4pm, at AFS Cinema. For tickets, go to www.austinfilm.org.

The Realist (parts 1 and 2) from Scott Stark on Vimeo.

A version of this article appeared in print on February 1, 2019 with the headline: Perpetual Disorientation