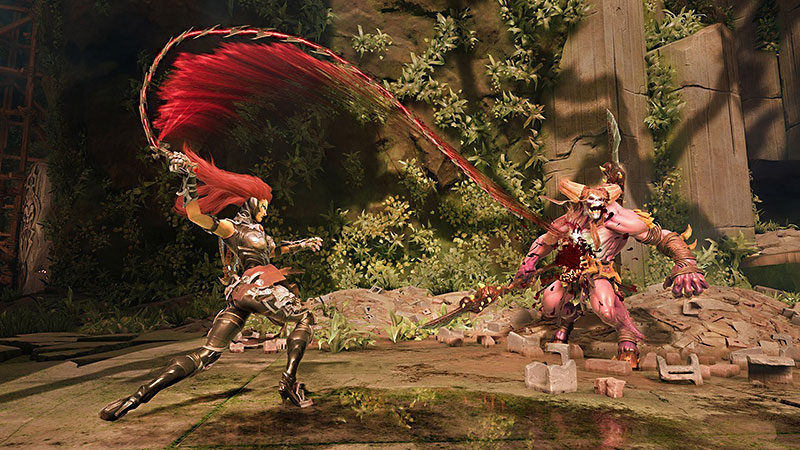 1) DARKSIDERS III (Gunfire Games)
Criminally underrated upon release, the third iteration of the Darksiders series put us in control of Fury, sister to the previous games' heroes, Death and War. The engaging story never gets in the way of the action, and that focus on fun is what puts this at the top of the list. The weapons are varied and offer upgradability, but the RPG elements never become a slog. Add terrific boss fights (the seven deadly sins) and a varied and open world, and you have a streamlined gaming experience that bucked this year's trend of incorporating everything and the kitchen sink. More than so many other games we played this year, Darksiders III respected our time. Bonus points for the first gender-nonconforming villain we've come across in a AAA game, singular "they" pronoun and all.
PlayStation 4, Xbox One, PC.
www.darksiders.com

2) SAUSAGE SPORTS CLUB (Chris Wade)
If there was a Floppiest Game list, Sausage Sports Club would be king of that hill. Just watching the top-heavy animals run around is a physical gag that keeps a smile on your face. The reality-show plot line of the single-player campaign is unique and charming, but the game's real strengths lie in the madcap anarchy of multiplayer mode. Up to eight friends dash, jump, push, and pummel until one sausage-shaped player remains.
Nintendo Switch, PC.
sausagesports.club

3) PREY: MOONCRASH AND TYPHON HUNTER DLC (Arkane Studios)
We don't normally consider DLC eligible for our Top 10 list, but Mooncrash was everything a player who finished Prey's main story wanted. Trim the narrative down, concentrate the game's experience, and make each playthrough unique, and you have one of the best add-ons in recent memory.
PlayStation 4, Xbox One, PC.
prey.bethesda.net

4) BANNER SAGA 3 AND ETERNAL ARENA (Stoic)
This final chapter offers the perfect conclusion to the strategy trilogy. The developers stick to what made previous installments so engrossing: deep gameplay and breathtaking art design. If you weren't playing because you were worried about an unsatisfying denouement, it's time to start at the beginning.
PlayStation 4, Xbox One, Nintendo Switch, PC.
www.bannersaga.com

5) IMPERISHABLE MEMORIES (Jennifer Raye)
Raye has made a name for herself creating deeply personal experiences, and Imperishable Memories is no exception. The hand-drawn art and improbably effective mash-up of shoot-'em-up mechanics and emotional storytelling will be enjoyable to all and deeply touching to some. Small stories often make the biggest impact.
PC.
jenniferraye.itch.io/imperishable-memories

6) SHROUD OF THE AVATAR: FORSAKEN VIRTUES (Portalarium)
If you've been waiting patiently since the 20th century for a new Ultima, then this was a good year for you ... kinda. With Richard Garriott and Starr Long at the helm, this is an Ultima game in everything but name, and it felt good being in the Avatar's armor again.
PC.
www.shroudoftheavatar.com

7) FALLOUT 76 (Bethesda Game Studios)
Made largely here in town, this MMO still has some bugs to work out – but we're not going to complain about any visit to the retro-futuristic Fallout universe.
PlayStation 4, Xbox One, PC.
fallout.bethesda.net

8) SOCCER SLAMMERS (Atooi)
Perfectly suited for the Switch, this stripped-down, fast-action multiplayer title is easy to pick up and fun every step of the way toward mastering the tackles, sprints, and combo-shots.
Nintendo Switch.
www.atooi.com/soccerslammers

9) SONARIUM (Ethan W. Kampa)
Break out the headphones and explore the danger-filled landscape using only the top-notch 3-D audio design and a sonar-like pulse to help you avoid unseen dangers and find the tools necessary to escape.
iOS, Android.
www.ethanwkampa.com/sonarium-audio-game

10) ABSOLUTELY: A TRUE CRIME STORY (Davey Wreden and Ryan Roth)
This little interactive haiku technically came out at the end of 2017, but like the game's star, Keanu Reeves, we're breaking all the rules.
PC.
dualryan.itch.io/absolutely-a-true-crime-story