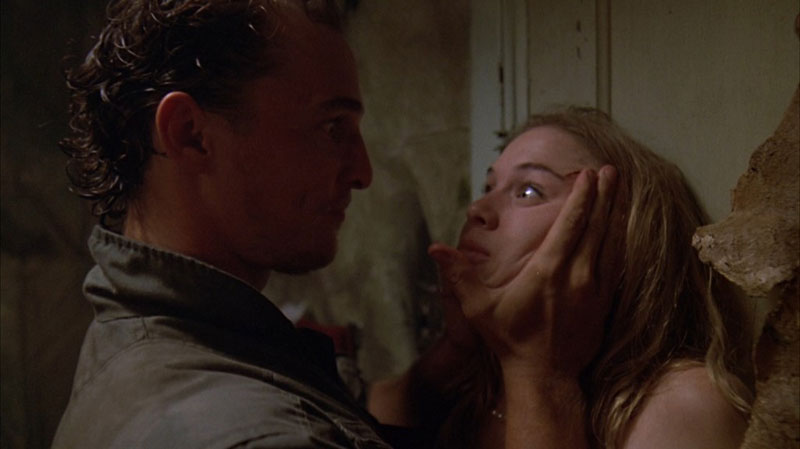 Before they were famous: Matthew McConaughey and Renée Zellweger in Return of the Texas Chainsaw Massacre

"August 18, 1973. News of a bizarre, chainsaw-wielding family – reports of which were to ignite the world's imagination – began to filter out of Central Texas. Regrettably, not one of the family members was ever apprehended, and for more than 10 years nothing further was heard. Then, over the next several years, at least two minor yet apparently related incidents were reported. Then, again, nothing. For five long years, silence ..."
– Opening narration, Texas Chainsaw Massacre: The Next Generation

"Texas as a mythical place is one place, but the reality of Texas, of course, is entirely different. We're almost as good at raising crazed mass murderers as Utah. But what do you expect of a nation that was settled by religious fanatics, ne'er-do-wells, and criminals?"
– Writer/Director Kim Henkel

Every generation gets the Texas Chainsaw Massacre it deserves. Director Tobe Hooper and screenwriter Kim Henkel's initial foray into the outer limits of, shall we say, original Austin weirdness echoed the shell-shocked psyche of a country not yet ready to come to terms with the grisly debacle that was the Vietnam War – Saigon would fall just six months after the film's October 1, 1974, release – and reeling from the OPEC oil embargo, the spectacular implosion of the Nixon presidency, and the grim death by attrition of Sixties idealism. Leatherface and the Sawyer clan were the all-American nuclear family gone haywire, a perfect metaphor for the times.

But times changed, and the emergent franchise kept apace despite the law of diminishing returns. In 1986, Hooper's The Texas Chainsaw Massacre 2 brought on board an abattoir of Tom Savini's gruesome gore effects while poking subversive fun at President Reagan's misplaced notion of "morning in America," underscored by Timbuk 3's misunderstood anti-nuke anthem "The Future's So Bright, I Gotta Wear Shades." Four years later, the California-shot Leatherface: Texas Chainsaw Massacre III came and went with barely a shudder, its original X rating slashed down to a tame R. It seemed then that the 'saw was flat outta gas.

You can't keep a good cultural metaphor down, however, and so in 1993, original Chain Saw scribe Henkel put pen to paper – and took over directing duties – and created a horror movie 25 years ahead of its time, The Return of the Texas Chainsaw Massacre. Filmed in Austin, it starred two then-unknown locals: Renée Zellweger and Matthew McConaughey.

Unfortunately, and due in part to Columbia TriStar's resistance to having Creative Artists Agency's newest signees turn up in a low-budget genre movie, Henkel's film sat unreleased until 1997, when it opened domestically in a truncated version as Texas Chainsaw Massacre: The Next Generation (find out more about that legal kerfuffle in our 1997 interview with producer Robert Kuhn, "Chainsaw Courthouse"). It played on a mere 20 screens for fewer than as many days. The director's cut, a full six minutes longer than the version shown in theatres, has remained unseen for 25 years. Until now, that is, thanks to Scream Factory's Collector's Edition Blu-ray, which comprises both the theatrical version (in HD) and Henkel's preferred cut (in standard definition), a brand-new commentary track, multiple interviews, and behind-the-scenes footage.

“I think a lot of people weren’t very happy with [The Return of the Texas Chainsaw Massacre] because it’s kind of low on the gore and the slasher aspect. It’s more of a thinking person’s Chainsaw film.”

Watching Henkel's uncut version today injects multiple levels of ghastly, paranoiac intrigue and horror that wasn't immediately apparent at the time it was made. According to Brian Huberman, director of the exhaustive on-set chronicle of the making of this fourth Chainsaw, The Return of the Texas Chainsaw Massacre: The Documentary, "I think a lot of people weren't very happy with [the film] because it's kind of low on the gore and the slasher aspect. It's more of a thinking person's Chainsaw film. Kim is a very thoughtful, dare I say, intellectual kind of a guy. And so there's some really interesting stuff going on in his head, and it comes out in the movie."

All true. The late Robert Jacks' version of Leatherface plays like an addled hausfrau, alternately cringing and screaming (and screaming ... and screaming), while McConaughey's off-the-hook performance as mecha-legged leader of the pack, Vilmer, is all shit-eating grins and incendiary rage. No longer a "family," this is a predatory cabal that eschews eating long pig in favor of – wait for it – pizza. Zellweger, for her part, gets the shit knocked out of her every other scene. This is about as far from Hooper's original as you can get, and the third act's introduction of actor James Gale's character, Mr. Rothman, reveals that the front-and-center crazies at the heart of the horror show are mere cats' paws to a far more villainous set: the Illuminati, or some simulacrum thereof.

Heady stuff for Henkel, a first-time director who by his own recent admission didn't really want to take the reins in the first place. Looking back, he told the Chronicle, "Writing, as you know, is a solitary job. The benefit of that is that as a writer you're fully in control of what hits the page. The soul of filmmaking is the somewhat chaotic and spontaneous nature of the process – it proceeds almost by a series of controlled accidents. And the joy of it [is] in its almost necessarily collaborative nature. I like that and I enjoy being a part of the process, but I'll stay behind the camera. Directing is just too damn much hard work on too little sleep."

Ultimately, audiences responded with a collective "What the fuck?" to Henkel's 180-degree pivot from the traditional storyline; but what was an out-of-left-field plot deviation in 1994 now seems – in the era of Alex Jones and Donald Trump – right on target. After all, you're not paranoid if they really are out to get you, are you?

Speaking candidly in Huberman's documentary, Henkel said, "I always felt that what was really frightening was that we are frightening, you know? Our capacities, the human capacities, are frightening. The only thing that's genuinely frightening to people is people. Vilmer's just a Boy Scout. The real horrors in the world are not. The incidental and everyday violence [is the real horror]. We all know that. It's the suffering of individual private lives, the asking that the human character behave in a way that's simply unrealistic given its complexity. What's done there is far, far more horrible than somebody, you know, chopping off a few heads right and left."

As far as the now-classic status of the original Texas Chain Saw Massacre, Henkel continued, "I've never been able to watch it with any kind of perspective. To me it just looks like some crude backyard movie a bunch of kids slapped together. There seems to me to be, on one hand, a group of people who were strictly horror fans who venerated it. Only over time has it come to occupy a very peculiar position, and I still don't have any concept of what that is. I think we just wanted to hang a bunch of people on meat hooks, chop 'em up, and sell tickets at the theatre."

Indeed, the gore quotient in the unexpurgated version is relatively low – although special effects creator J.M. Logan's multiple Leatherface(s) are a particular highlight – while the director's blacker-than-black sense of humor is amped up to 11. If the 1974 Chain Saw was a sweaty, Texas summertime fever dream of a nightmare, this Next Generation is an absurdist lark: extra Dada, hold the horror. Which isn't to say that Henkel's directorial debut isn't a bona fide shocker; it is, but there's more than a little Marx Brothers to the mayhem at hand, all of which, by the way, is backed by a time-capsule sampling of Texas bands both old and circa shooting, chief among them Roky Erickson, Daniel Johnston, Skatenigs, and Pariah. And while we're at it, keep an eye peeled for a pair of blink-and-you'll-miss-'em cameos at film's end.

For all its budgetary constraints, unjustly excised sequences, and perceived failings at the time of its non-release (which have, in the fullness of time and Infowars.com, morphed into an all-too-believable, "whodathunkit" sort of prescience) Kim Henkel's Texas Chainsaw Massacre: The Next Generation can finally take its rightful place in the Cut-Rite Chainsaws pantheon.

A version of this article appeared in print on December 21, 2018 with the headline: The Roar of the Saw